Adoption Advocates at Work: A Family for Eva

Every Child: The Bamboo Project in an Adoptive Mom's Words 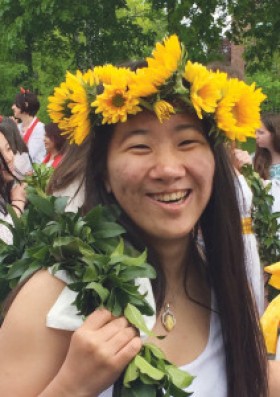 Living My Own Story

My concept of how stories progress is one shaped by the bedtime stories my mother told me every night. I never had a traditional bedtime story growing up, although I didn’t realize this until I got older. Instead, my mother would tell me the story of imperial influences on Australian aboriginals; of the Battle of Wounded Knee. I grew up oblivious to Green Eggs, but heard of the Arduous March and Yugoslavian collapse. As meandering as these stories were, my mother would always end the night by answering my questions, explaining things I couldn’t understand and pondering what neither of us grasped. Through a somewhat convoluted process, my concept of a story formed. I think of stories as circular, where characters begin in one place, in one state. Taken through the story, they return to the original place, somehow changed.

Stories were how I learned about nuances and grey areas that fill the frame in our daily lives. Learning to share, to be a good friend and to work as a team were lessons I understood and accepted from stories, no matter what outlandish package they were delivered in. As I grew older, I began to move from my mother’s oral histories to books with inadequate lessons on the meaning of family, much to my disappointment. The Danish story of the ugly duckling didn’t work for me as he found his family based on others’ perceptions of beauty. There was nothing random or haphazard about my placement, and the themes of what it meant to be ugly struck a nerve with me, with a cleft among other birth defects. Charles Dickens lent thoughtful prose to the plight of displaced children, but focused on politically satirizing a Victorian England I couldn’t apply to my life in the Pacific Northwest. I gave up searching for a tailored story of transplantation, although I ran into stories involving adoption at every turn. Stories with adoption are everywhere, complete with mixed, contradictory and questionable messages. Many of the stories I came across were whimsical, for children with simplistic ideas of what it means to be loved. The magical rags-to-riches stories of long-lost scions didn’t help, especially when classmates told me they fervently wished to discover they were adopted and were actually royalty. Other stories are old myths or classic literature that involved lies and tragedy. Babies left in the woods to be found by old hags seemed unrealistic and sexist. Mystery writers and soap operas alike exploit adoption as a favorite plot twist. Oedipus comically scared me because it was the culmination of every “conceivable” thing that could go wrong in a birth search and reunion. Shakespeare provides slapstick jokes using separated twins who get over the implications of transplantation in time for curtain.

I arrived at college four years ago, certain I knew who I was and where I was going. I knew I would be an international relations major, take Arabic and maintain my French. Within my first semester, I had found a new wardrobe in the free bin, taken on a new nickname and declared my major in geology. I joined the few, the proud; the rocks and minerals crowd. I was over 3,000 miles from home and at the start of my blank slate. My college’s campus is picturesque with meandering and well-tended paths that tell the story of a pioneering school for women. Walking by vine-draped castles and traipsing through hallowed halls lined with the school’s historic artifacts made me feel all the more like I was starting a new adventure in my own story. I was the protagonist at the threshold of a series of events that would eventually bring me back to the beginning as a changed person.

For the first time, I was joining a tight-knit community where I could set the terms of my identity unimpeded by prompts to explain my adoption, surgeries or any aspect of my life. When someone tells a story, they share a piece of their humanity. We traded tales of ourselves, our mothers, dogs and cats, favorite books and classes. Whenever I shared more of my story, I was fascinated to see the assumptions and societal weight placed on adoption. Most non-adoptees I spoke to, when they really thought about adoption, instinctively realized it is complex and entails many components. Yet our literature and media portray archaic and simplistic views of the multiplicities encompassed in adoption. My classmates didn’t understand how I could spend hours studying a single rock. My favorite is the size of my head, metamorphic and worn smooth, collected at the beach. In non-geology terms, this rock had been something else, somewhere else, before it was pressed into its new form. It scraped and tumbled its way under the belly of a glacier, becoming chipped and smoothed as it went. Finally, it was left behind in a pile of debris as the glacier receded, indelibly altered with a confidential past. I was bemused by the lack of answers in geology on rocks that mirror the lack of answers in literature on family. In glacial deposits, many rocks remain an accepted mystery. My concept of stories was challenged to the core. I did not have the vocabulary to sufficiently explain why I felt such a deep connection to this rock. If a rock, or anything else, has no known origin, how can its story ever come full circle?

Despite common conceptions that geology consists solely of dramatic, destructive events, my passion for geology derives from both the destructive and creative processes. In this context, I realized college gave me a chance to figure out who I might have been or who I might become. Even if it is as simplistic as identifying with a rock with an incomplete timeline, I have come full circle. I am equipped with a stronger sense of myself. Rather than piecing together a collage of myths and fairytales, I am looking forward to living my own story.