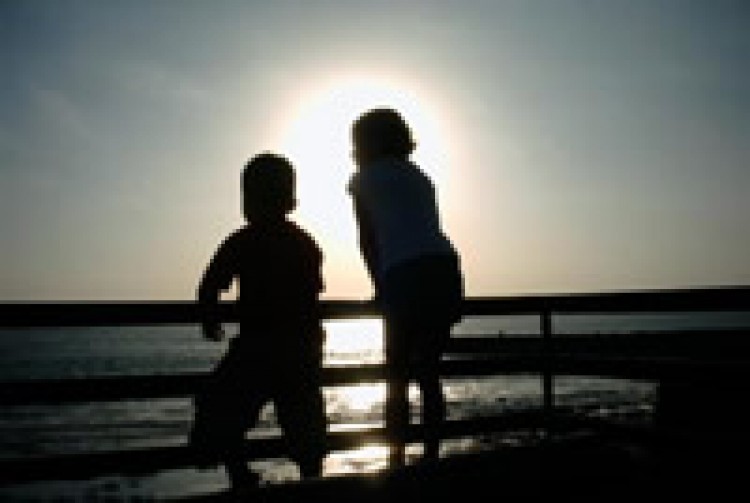 A few weeks ago, I spent a weekend with my big sister. The time we spent together was not atypical; we went out to eat, did a little shopping, and splurged on pedicures. What was atypical were the confused looks from the ladies giving the pedicures, from the overly chatty check-out man at a store, and from the parents of my nephew's friends when we went to pick him up from a birthday party as we gently corrected all those assuming we were just friends.

Even now as an adult, I still seem to forget from time to time that my sister and I look so different from one another to the outside world. When I was born in 1985, I became the sixth and final child of a family already made up of two bio sisters and three bio Korean siblings who had joined our family several years earlier. My first photos of life in this new world are five individual shots of each of my siblings holding me in a rocking chair at the hospital, grinning from ear to ear at their little sister (a title that at 21 years of age I still can't seem to shake and don't really care to). From day one, the faces around me looked nothing like my own, and that was my normal from that point on.

Many pre-adoptive parents are hesitant to add children of different races to their family for a multitude of reasons. Living in non-diverse areas, wondering how to raise children with a strong sense of their birth culture and self while raising them in a whole different world, and dealing with the inevitable looks, questions, and occasional disparaging comments when venturing outside the home are all valid concerns. For adoptive parents, these concerns are only multiplied when there are already biological children to factor into the equation.

Parents with biological children need to assess the impact adding additional children to their home will have on their existing children. Many struggle with wondering if it is fair to expose the children they already have to a situation in which the new additions will require much extra work and attention during the initial adjustment period and possibly beyond. The prospect of turning a household upside down while also making the family different every time they step out the front door by adding a child of a different racial background is downright intimidating. Yet from my experience, different can become a family's normal pretty quickly.

In a home with three children who came to us at older ages from an institutionalized setting in South Korea , race (though something addressed and respected within our household) was probably one of the least significant issues we faced as a family. There were problems with attachment, adjusting to different types and amounts of food, old hurts to heal, and a previous life of sub-par medical and dental care to correct. When the three newest family members first started at the elementary school our two oldest sisters were already attending, a racially derogatory comment was made about our new additions while out on the playground. My gentle, soft-spoken oldest sister gave the kid the verbal lashing of his life. No one talked about her brother and sisters that way and that was the beginning and end of it.

As I got older, I knew that not only was my family different, but I was different. From day one, I hated it when people asked me which ones my real sisters were (to which I still reply that since I have no fake sisters, I have no idea what they could possibly be referring to). But beyond this, it also started to hurt me when people couldn't or wouldn't see the rest of the world the way I did. I grew up knowing that three of the people who were the whole world to me came out of extreme poverty, that there were scars on their bodies they couldn't recall receiving, and that they had vivid memories of a woman who loved them so much she gave up her heart when she let them go to the orphanage for a chance at a better life. Their history could not be separated from my own.

I never grew up with the white, suburban view of the world my peers shared. When stories came across the news of horrors in places far away, I didn't feel sad for a moment and turn away. Even as a child, I felt it to the core of my being.

Without a doubt, I can say that being the little sister of three people born into a different world has been the overriding element that has made me the person I am today. As a little girl I could locate other countries on a map most adults had barely heard of. I worried about the starving children in Africa as I fell asleep at night. In high school, I stayed after school to work with students who had recently immigrated to the U.S. on improving their English skills and breaking down communication barriers so they could attend mainstream classes. Now as a senior in college I am finishing up a degree in social work so that I can work in the adoption field. In every face, in every situation, I see my sisters and my brother. I am who I am for being their sister.

Was my life made easier by being raised in a multi-racial family? The honest answer to that is: No. But it was made better. Although I was exposed to discrimination, hatred, and general insensitivity from day one, I also stretched and grew in ways that my peers could not.

My siblings made me a citizen of the world from the moment I was born. I can understand poverty, struggle, and the hurts that others carry deep inside of them without ever having to learn it. The man in the check-out line looking confusedly at my sister and me is no big deal. We smile and move on, leaving him to turn it over in his own head.  The depth and richness that my sisters and brother have brought to my life, however, is everything.