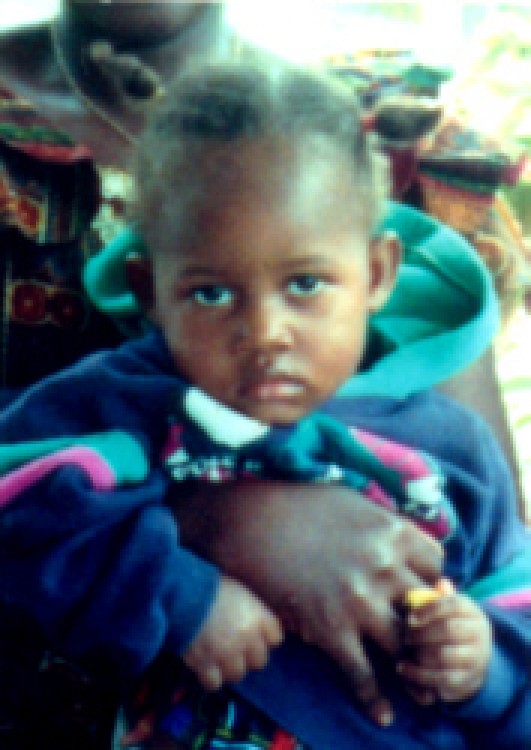 There was once a continent that our family was very unfamiliar with. And a certain country we had scarcely ever heard of. Liberia; a small West African country that in the early part of 2000 would hold a treasure I had yet to discover. Less than one year later I would be the parent to one of Liberia's greatest treasures.

After eight years of marriage and several rounds of fertility treatment my husband and I decided that the best way to expand our family was thru adoption. Thus, began our journey that could have only been fated by God. Adoption wasn’t an idea that was new to me. My grandfather had been adopted as an infant and as a Jr. High student it was a dream of mine. I was introduced to the book 19 Steps Up the Mountain about the DeBolt family and at that point I decided that I would some day adopt a child. But the dreams of children are often pushed aside for the realities of life. As I grew and later married my husband I like all new wives dreamt of little ones with my olive skin and my husband’s curly hair and blue eyes. But, what we want is not always what is meant for us although it would lead to the rebirth of an old dream.

In October of 1999, we had made the decision to pursue adoption and go thru our state agency. We attended the orientation meeting to find out what was involved and signed up for the required parenting class that started in January. When I returned to work after the Christmas holiday I was asked by a co-worker if we were interested in a private adoption. We were thrilled and said yes, so we would not need to go to the parenting class and cancelled. Unfortunately, this dream would come crashing down just a month later, when the birthmother had a miscarriage. We were back at square one and called about getting into a class that summer. The class was being given by a contracted agency in the community, who also had an adoption program. After attending the first class, a lot of thought, discussion and prayer we knew we had once more hit a dead end. The agency wanted perspective parents to foster first, and this was not something I could personally do. For some unknown reason we attended the second class and at this time we met Sally, the person in charge of the adoption program at the agency. She told the class about the newest program with the Liberian Children’s Lifeline. We found the right fit for us. We spoke with Sally right after class and got the necessary paperwork. We hurried home and began to fill out our paperwork. How old of a child did we want, would we accept a child with a disability, what gender. Come Tuesday night and our next class (we decided to finish the class although it was not mandatory) we handed our paper work in and spoke with Sally about our hopes and expectations. She told us a little bit about Liberia, her husband is Liberian and she is the mother of at that time four children adopted from Liberia. One week from the time we first spoke to Sally we had our referral, a 2 ½ year old little girl with chubby cheeks and a very scared look on her face. Little was know about her father, except that he was dead and her mother could not care for her. Her birth mother wanted her to have two parents, good nutrition, medical care and an education. All things she could not provide to her daughter.

The journey was at times very frustrating for us and the other three families who were adopting at the same time as us. Our adoption in Liberia went very quickly. One month almost to the day, our adoption of the child formally known as Bendu, now known as Jasmine Bendu was complete. The part of the adoption we expected to be difficult was easy; the hard part was trying to bring our girl home. I have learned since this time that we actually got things thru quickly, but the time was hard to deal with. We found that dealing with the embassy and the INS was a maze that I felt was defiantly made difficult on purpose. I also had a new understanding with what the migrant families I worked with dealt with on a regular basis. INS decided that our marriage license was not valid and we had to get proof from the county we were married in to get a certified copy that we were truly married. Then when it came time to send our tax forms to the embassy we had to do it three times, because despite the fact that they were DSLed and signed for they were lost. Then the children’s visas were sent to Ghana. Finally, Sally decided to go and deal with the embassy personally. After two weeks of dealing with the embassy Sally and the children were coming home. The day they took off from the capital of Monrovia the rebels started shooting in the city. On April 28th at 10 PM at night we received our very tired and very bewildered 3 year old. I don’t think Jasmine even remembered coming home.

In the time since we first decided on adopting from Liberia I set out to learn about my daughter’s homeland. I have found out that in Liberia they treat their children very well, doting on the little ones. I have learned that adoption is very common especially in the native tribes, and a birth mother then “gives the motherhood” to the adoptive mother. I know that for nearly 20 years this once quiet and beautiful country has been shattered by civil war, death and destruction. The war has been over now for the last 18 months and has left in its wake thousands of children with no parents. There only home an orphanage, some of these left broken and battered by months and weeks of bombings. The children I have met who have come home to their families from Liberia are typically healthy, with the exception of malnutrition. They have ranged in age from infants of just 10 months to young adults of fifteen years of age. This is a country that if my family decided on adopting again we would go thru. The children are a national treasure that are looking for a forever home to shine in.

Sherry Shupp lives in Lehigh Acres, Florida with my husband and daughter. She may be contacted at: Shdcs@aol.com