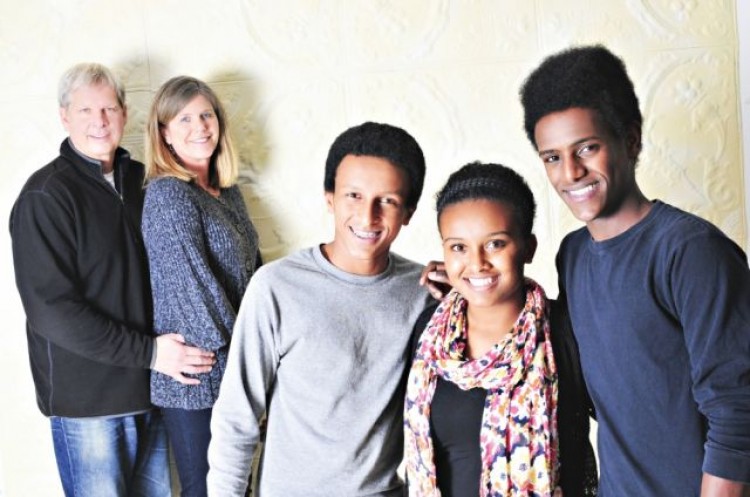 Throughout my life, I thought that someday I’d adopt, but I resisted the idea because, in our culture, you raise your family, you work hard, and then you retire.

Our three sons were grown, and my wife, Barb, and I were right on track for following the American Dream. Barb and I had raised our family, and I thought: Now we’re done!

I hid my thoughts about adopting from my wife, but she was vocal about her desire to adopt. I knew that if I said anything out loud, then Barb would make it happen, so I stayed on the fence for a long time. However, through prayer, the Lord made it clear to me that I was to discuss adoption with Barb. I was about 50 years old when we had our first serious talk about adoption.

When I finally told Barb that I thought we should adopt, her face lit up! As it turned out, she had already been exploring it. She said that she could contact some people to find out more, and I thought: Go ahead, make your calls, and when the agency finds out how old we are, they’ll kick us out of the office! Why would they want old people adopting kids? Privately, I figured: Surely our interest would be blocked by something, and then I wouldn’t have to do it!

Our adoption caseworker contradicted my every doubt.

She said: “You’re exactly who we’re looking for…you’ve already raised kids, and you are considering adoption because you really want to!”

The fact that we wanted two older children to join our family, rather than babies or toddlers, made her even more excited. My inner, undeclared thoughts were fearful: This could really happen!

For me, adoption represented a total unknown. As a high school teacher and coach for 30+ years, I needed to feel like I was in control and had the answers. I was used to “leading the discussion,” and adoption pushed me way out of my comfort zone.

We had international adoption on our hearts. It was our friendship with pastors in Uganda that pulled our hearts specifically to adoption from Africa. So our agency sent Barb photos of waiting children living in Ethiopia, and Barb forwarded the pictures to me. After looking at the kids, my prayer was this: Lord, this is really hard. All of these kids need homes…please make it very clear about who we should adopt!

The moment when I realized that we were definitely going to move forward was when Barb and I discovered that we had both chosen the same two children from the information  sent us. I no longer harbored any resistance to adopting.

In 2008 we were the first family to adopt from Ethiopia through our agency, and we traveled to the orphan project (orphanage) to meet our children, Aster and Dawit, who are siblings. Attending the goodbye party at the orphan center was devastating for us…Barb and I went back to the hotel afterward and sobbed. We questioned whether we were doing the right thing—we felt as if we were pulling these kids from their family. It was clear that the children were so close to each other—just like a family—and we were going to remove these children from friends and caregivers who loved them.

The next day we shared our concerns with the orphanage director, who set us straight. “These children have been praying for a home in the USA,” she said. “You are absolutely doing the right thing. Get rid of that feeling.”

God did more than we could have asked or imagined and made it possible for our new children to remain in contact with several of their “brothers and sisters” from the orphan project. You can imagine our amazement when one of the children who grew up with our kids was adopted by a family who lives 15 minutes from our house! We are all blessed to share our lives with that special young man. Two other children were adopted by a couple in Chicago, whose cottage is north of our city, so we see them whenever they vacation there. And the list goes on…

Almost every other child who lived with Aster and Dawit in Ethiopia has been adopted and has relatives who live near us. We also make a special effort to stay connected through reunions, family travel, and technology. These kids from one orphan project in Ethiopia were adopted by families halfway around the world, and somehow they are able to get together frequently in the United States. What are the odds?

While we were investigating the possibility of adoption, Barb and I had not discussed our intentions with our sons. Finally, the time came when we needed to call a family meeting. When we told the boys about our plans to adopt siblings from Ethiopia, it did not go well at all! They had a lot of concerns. One of our sons said, “You know, you guys are getting older. What if something happens to you? Who’s going to take care of them?”

That was a valid question, but frankly, I was in total disbelief! Is that all they could say? As I recall, before Barb and I left that family meeting, I expressed my disappointment with our sons’ reactions. We asked the boys to pray about it and to talk about our plans among themselves.

The boys got together during the months that followed and then came back to us with a message that went like this: “We don’t know if we’re totally for this, but we do know that we totally trust you. We want to get on board and support you.”

By the time we adopted our third child from Ethiopia in 2012, Yednay, there was no need to be concerned about the older boys’ reactions.

Each of our older sons has come to Barb and me and told us how glad he is that we adopted. In their words, “They [their adopted siblings] have made us a better family. They have taught us things we could never have learned otherwise.”

Two of our sons are now married, and our younger kids were in the weddings. Our older kids love their younger brothers and sister like crazy. In fact, one of our married sons says that he and his wife are planning to adopt.

You know, when we were 40 years old, I expected that eventually we would have a retirement place in Florida, but at 57, I like this life better…I really do! Don’t get me wrong, it’s harder than retiring, but we don’t sweat the small stuff in parenting this time around. Yes, there are challenges. Our kids have seen and experienced so much that we could never possibly understand, but God has protected and gifted our children in so many ways. We have the privilege of seeing the power of God manifested in their lives every day.

One of my friends who is also an adoptive parent—a kindred spirit—told me recently that he looks at adoption in this way: “One day in our home—even if it’s a mess—is better for that child than not giving that child a home.” I agree with him completely. That’s a wonderful way to explain this experience to others.

My advice to any readers who may be older and considering adoption is this: Quit thinking about what’s going to happen. Don’t worry about tomorrow. Don’t worry about the future. Today is the day the Lord has made. Trust the Lord, and give these kids a home!

Adoption Advocates at Work: A Family for Eva