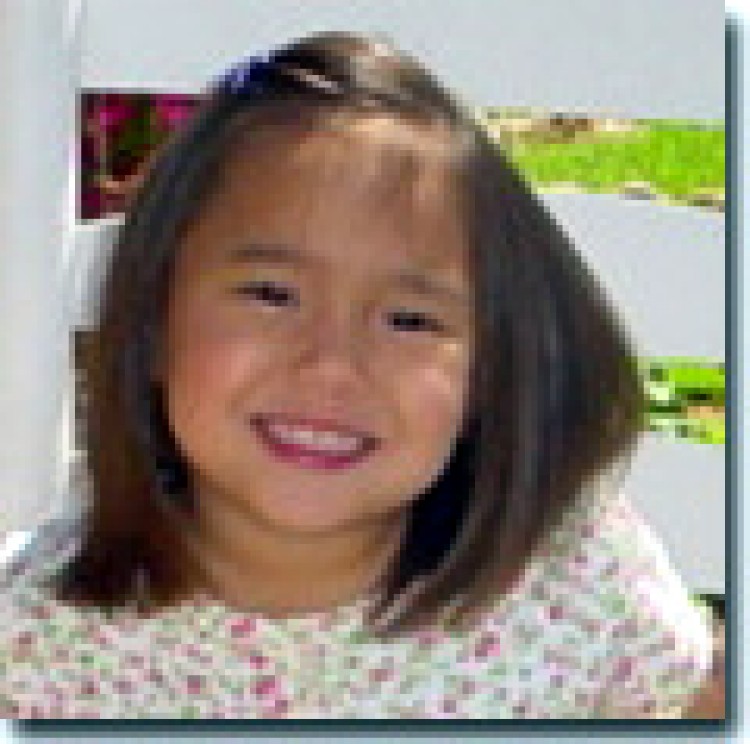 "Kazakhstan" never heard of it ? Where in the world is Kazakhstan? How do you say that again? Why Kazakhstan? These were just a few of the questions we were asked when we decided to adopt, Aizhan Serikova. This name was given to her by the hospital staff that found her outside the emergency room, wrapped in a blanket with a black hat on her tiny head, in the dead of winter on February 17, 1998. (Believe me, it is cold there in February.) The hospital staff believed Aizhan was born on that day.

After adopting Hannah, we had such joy watching her grow and change. We just could not get enough of her; our hearts were overflowing with love. Steve thought Hannah needed a sister. So we decided it would be just as easy to love two little girls and began to look for our fourth child. Since I am an internet nut, I searched and found Aizhan's sad little face on some website. I had no idea where she was or what it would take to get her, but we knew we wanted her. We felt so very drawn to Aizhan; something was pulling at our hearts. She was exactly one year older than Hannah and she looked so much like her. We knew she was our special little girl. I then sent an e-mail to the website requesting information about Aizhan.

They e-mailed me back and said that Aizhan was in a babyhouse in Uralsk, Kazakhstan. We asked them to tell us where Kazakhstan was. Kazakhstan, one of the largest republics to come out of the breakup of the former Soviet Union. The northern borders touch Russia and the eastern borders touch China. Ethnic groups in Kazakhstan are Kazakh 46%, Russian 34.7%, Ukrainian 4.9%, German 3.1%, Uzbek 2.3%, Tater 1.9% other 7.1%(1996)

Aizhan was almost three years old and would be moved to a bigger orphanage if she were not adopted soon. We found out it would take a three-week stay in Kazakhstan and Moscow, Russia to complete our adoption trip. Wow! Three weeks sounded like a long time to be away from Hannah.

Steve and I did everything backwards. First, we adopted a year old child and then a year later, we adopted a three-year-old child. Most people do their paperwork, then pick a referral or get a referral from Kazakhstan, but as I said before we did everything backwards. We picked our referral, Aizhan, first; then proceeded with the paperwork. We were told by the agency that they thought we could get Aizhan here by Christmas. What! It was September when I first looked at her picture and now we were being told we would have her soon. It seemed that they were in a hurry to get Aizhan adopted because she was an older child and would be moved to another orphanage when she became three years old. Being a pro at the paper work, I worked very quickly to complete a second dossier. Because of waiting on INS, we were not able to leave until January 20. Please understand that it usually takes about 12 months to adopt from Kaz. We were just incredibly lucky!!

The day came for us to leave to get Aizhan. We flew from Lexington to Detroit to Frankfurt, Germany; then to Samara Russia where we were driven to Uralsk It usually takes about four hours to get to Uralsk, but because of icy roads, it took us almost six hours (in a car with no heat) to get there. Although there was another couple and one single mom with us, we were all taken to different apartments. Even though we had great interpreters and everything was taken care of for us, we missed being in a group like we were in when we traveled to China to get Hannah. We were so alone with no one to talk to. Remaining in groups gives you the advantage of having a support system while you are waiting for your child. Everything is totally out of your hands, you just have to trust in God and your agency to take care of everything.

After settling in, we were picked up every morning and afternoon and taken to the babyhouse to visit Aizhan for two hours at a time. We went shopping after our morning visits; then following the afternoon visits we went back to our apartment. Our first visit with Aizhan was so special. She had been told about us by her caretakers and that we were coming to get her. We had also sent pictures of us to the caretakers so they could show Aizhan to help her become familiar with us before we got there. She seemed to love us and was so sweet and lovely. These visits went on for 13 days. During that time Aizhan started pulling away from us and became very withdrawn. It was almost like she was there, but wasn't. I think she was wondering if we were going to take her or not. It seemed to be very confusing for her because we kept coming and going.

We went to court in Uralsk as part of the process of adoption. Our interpreter told us what to expect, what to say, and how to react. It was very serious and somewhat formal. We were granted custody of Aizhan and also changed her name from Aizhan Serikova to Aizhan Marie Taylor. We were then allowed to get our daughter and take her to our apartment. She loved the apartment and seemed to open up more. She was still very reserved and wanted to play in a small space. She slept through the night and the next morning we were on a very small plane to Almaty. We were excited beyond words to have gotten that part of our trip over.

Well, when we arrived in Almaty, we thought we had died and gone to heaven. Almaty is a beautiful city in Kazakhstan with a lot of things to do. We were taken to a beautiful apartment and Aizhan ran around the apartment like a bird let out of a cage. Carol (the single mother that had traveled with us) and her adopted daughter, Julia Damira, were just next door so we got to visit each other while in Almaty. We also shared the same driver who took us shopping, sightseeing and then to a pizza restaurant for lunch!! We stayed in Almaty for three days.

Next we were on to Moscow, Russia, where we would depart for home. Moscow was beautiful and we stayed 2-3 days in a beautiful, expensive hotel. We had wonderful food and treated ourselves to luxury. At this point, Carol, her daughter, Michelle and Tim, (the other couple that had begun our travel with us) their two adopted 8 month old children, (many people adopt more than one child) Steve, Aizhan and I were all in the same hotel. We went everywhere together. We were taken on a sightseeing trip in Moscow.

Our trip home with Aizhan was tough. She didn't seem to be the traveler that Hannah was. God knows what he is doing, when he gives you the easy child first and the more difficult one last.

We finally returned home five days before Aizhan's third birthday. We were very happy to see Hannah, who by the way, gave me the cold shoulder at the airport. But the next morning she could not stop hugging me. It felt great! It took three months or longer to adjust and feel like a family. Aizhan spoke Russian, but started learning English very fast. In two weeks she was communicating. She has one Russian word "Cookie" that she still uses. It means doll in Russian. She calls people that she likes, "Cookie Dolls". Aizhan is a very sensitive, beautiful, serious little girl. She loves us with all her heart as we love her. We love her so much, that it is too hard to describe. We have all bonded as a family. She is very proud to tell people she was born in Kazakhstan. She tells people she is special and that her mommy and daddy came on a big airplane to bring her home to America. At first, she remembered her friends and caretakers from Russia, but today she doesn't seem to remember any of their names when we mention them to her. She says she never wants to fly on an airplane again. She also says she never wants to go back to Kazakhstan. During the first few months that Aizhan was in her new home, she would ask continuously if this was her home. We would tell her yes, and she would say I thought so. She needed to be told this often. She loves her mommy, her daddy, her Hannah, her Stevie, her big Sissy (Carie) and her many, many friends and family members. When talking, Aizhan always refers to any person in her life, now, as being hers. This lets us know that she is happy to be a part of our family. Yes, it was a tough process getting Aizhan, but nothing precious in life is easy.

Why Kazakhstan? You can only imagine the image of little faces pressed against the window watching us as we were leaving with Aizhan because she had found her forever family. That's why.