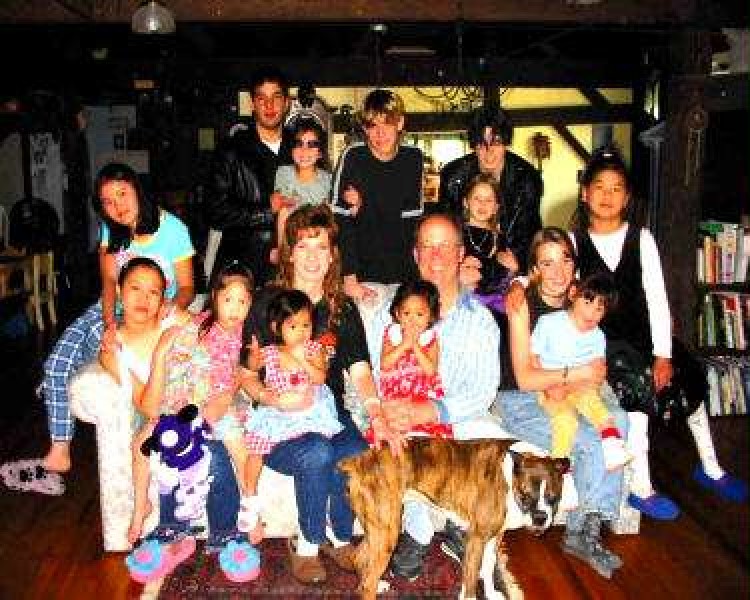 My husband and I have seen hundreds of orphans. And, during our adoption trips, we are reminded each time how many children there are without a family. When we traveled to Shenyang, China in December of 1999, we were adopting 13-year-old Evelyn Li Yan. We spent time at the orphanage. The children were well cared for, the staff was friendly, and we were entertained by an adorable group of children that sang and danced for us. We took lots of video and still photos. Leaving the orphanage for the last time for enormously painful for our new daughter. She collapsed and had to be helped out to the car. This had been her home, her family, for a very long time.

We looked towards the front steps of the orphanage and there they were -- the children that would not be leaving with a family. Those images always haunt me.

We arrived home after our two weeks in China and Evelyn worked very hard at trying to cope with all of the changes in her life. We asked China for a brave, smart, and beautiful daughter and she certainly was all of those things and more. Although, when we told Evelyn about our request for such a daughter, she told us that Beijing had sent us the wrong child! Often Evelyn’s thoughts would return to China and she would miss her orphanage.

When we got our film developed from our trip we were all excited. We found ourselves especially drawn to a little girl that appeared to be 8 or 9 years old. Her name was Fu Chun. She had this very sad look about her. We saw her smile only twice during our visit to the orphanage, once, when we gave her a Barbie doll, and the second time was when she danced with the group of children. But when she smiled, she lit up the room!

Both my husband and I took notice of her while we where at the orphanage and I even made a point of taking some photos of her. We found several points in our videotape where we had been looking at her also. Before we knew it, one of those photos was on our fridge.

As we got about our lives in the weeks and months that passed that photo remained on our fridge. We had no intention of adopting another child. At that point we already had nine children and were feeling settled and comfortable with our brood. Apparently, God had other ideas for us -- because we could not get that little girl out of our hearts.

Her face, that smile, her enthusiasm when she danced, just kept drawing us into her. There we were, falling in love with a child half a world away. The day came that we relented and called our agency. They said that they would look into it for us.

Soon we received an email about Fu Chun. We were told that she was older than we estimated, as she was 11 years old. We were also informed that she was a special needs child; she had suffered severe burns as a baby to her lower legs and feet, and had had amputations of all her toes and half of each foot. Also, the child had never attended school. The orphanage had decided that she would never find a family, so they were training her to care of the babies and she would live at the Social Welfare Institute forever. We needed no time to decide. If Beijing would consider us for this waiting child, then we would be honored to bring her home.

Asking to be matched with a waiting child is stressful. You can’t help but fall in love with them as you wait the many months it takes for your dossier to be processed. We prayed that we would be matched to Fu Chun. We even decided that we would give her the name Julia. To make matters even more interesting, the staff at the orphanage told Fu Chun we were going to adopt her! Our daughter Evelyn asked them to say nothing to Fu Chun until the match was official, but they told her anyway. In one of Evelyn’s phone calls to the orphanage they put Fu Chun on the phone to speak to me. Her first words to me were “Hello Momma!!” and she proceeded to sing me the ABC’s and a cute counting song. She brought tears to my eyes.

About three months after our dossier arrived in China we got the news we had been praying for. Beijing had officially matched us to Fu Chun. We were elated! We made our travel plans to return to Shenyang in November of 2000. Evelyn was excited but apprehensive as well. On the plane over she awoke from a terrible dream. She shared with us that in her dream she woke up alone on the plane in Beijing, without us. This poor girl was worried that we would bring her back to Shenyang and abandon her. I had sensed this insecurity in her during the months we waited to travel and took every opportunity to reassure her, but feelings of abandonment run deep.

The moment had finally arrived when we were to meet Julia Fu Chun. Our family never made it to the hotel room when the car drove up. Suddenly Julia Fu Chun came running into the lobby yelling “Momma!!” and she wrapped her arms around me. She had that smile on her face and she hugged me hard. What a reception -- much more than we could have ever dreamed! Julia went around hugging Evelyn and meeting her new sisters, as we had taken some of our other daughters with us on this journey to Julia.

Julia’s adjustment to our family was immediate. She was thrilled to be with us and very excited to be adopted. However we had one moment in which she became terribly upset. After taking her shopping for new clothes, she had a breakdown at the hotel.

She was inconsolable. Julia told Evelyn that she was afraid that we would not love her because of her scars. So I took Julia and sat her in front of me. I asked Evelyn to translate each sentence that I spoke to Julia. I kneeled down and held her little feet. I look into her eyes and said, “I love your feet”. I then ran my hands up her legs a little ways and said “And Mommy loves your legs”. I worked my way up to her knees and said “And Mommy loves your knees”. I cupped her face into my hands and told her that I loved all of her and that she was beautiful. She reached out and gave me a strong hug and just sobbed.

After a long and incredible trip back to China our flight landed in New York City. We were exhausted but excited to be back in the United States. As I was dragging our luggage around the airport I looked over at Evelyn and told her that I was happy to be home. She gave me a broad smile and said “Me too Ma!’ I think the trip back to her orphanage was very therapeutic for Evelyn. It allowed her to see her life as it had been before her adoption, gave her time to visit those she deeply loved, and proved to her that we would not abandon her. Maybe now she could begin to believe that we were truly her forever family.

Life in our family with Julia has been truly wonderful. She has been home for eighteen months now. Her smile is contagious and her enthusiasm for life is inspiring. She does not allow her disability to limit her. She has great strength and determination and lets nothing get in her way. She is playful, caring, and very loving. Her experience with young children in the orphanage helped her bond immediately with her younger sisters despite the language barrier. Evelyn and Julia have known each other since they were small children together in the orphanage. They are fortunate to have many shared memories of their lives in Shenyang.

We are grateful that Julia found her way into our hearts and touched us so deeply. We are so blessed to call her our daughter.

Bonnie Loza Mom to 13!! (we did not stop with Julia) And Cambodia, Nepal, and Taiwan Program Coordinator for Florida Home Studies and Adoption