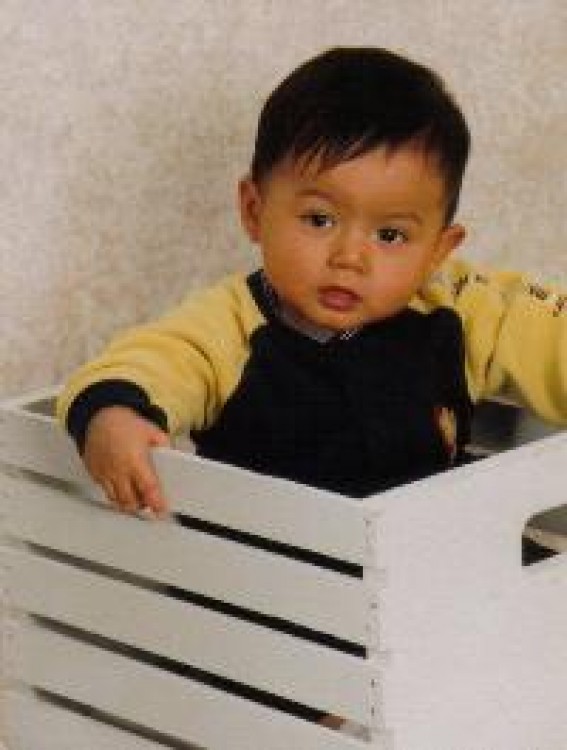 Note from CHSFS: Families always ask us about the risks involved in adoption. They are understandably afraid that something might be "wrong" with their child. Here is one family's story and their Guatemalan adoption that talks about this question.

In September of 2004, days before we were ready to travel to Guatemala to bring our younger son Alex home, we got a phone call telling us something was wrong with one of his eyes. By the end of the week the Guatemala Program coordinator called back with the results from the doctors visit. Alex had a cataract in his right eye and it would need immediate attention once we brought him home.

My husband Jim and I were relieved that it was something that could be taken care of with surgery. After spending a week in Guatemala, we came home and immediately called the International Clinic at the University of Minnesota to get a clear understanding. The doctors there informed us that this was an urgent matter and we needed to see a pediatric ophthalmologist immediately. This is when my endless stream of doctors’ visits began.

Alex was only 7 months old when he had the cataract surgery in October 2004. The surgery went extremely well and we were all very relieved, including the doctor. From there I had many follow-up doctor’s visits, including one on how to put a contact in and out. Yes, we put in a contact in a baby. It is not an easy thing to do, but Alex loves wearing it because he can see!

As time went on, Alex was still not sitting unassisted, rolling over, or doing things typical eight month olds should be doing. It became apparent something was going on. I contacted early intervention through our school district to set up an assessment. In the meantime, our family doctor referred me to a pediatric orthopedic surgeon. The doctor confirmed he was fine, but recommended that we see a pediatric neurologist. In one week we found out that Alex was developmentally delayed. The neurologist told us that Alex might have cerebrally palsy and an ENT told me he had possible hearing loss and would need hearing aids.

A MRI was scheduled as well as a sedated hearing test called an ABAR to confirm the hearing loss and blood work to see if the birthmother had any infection that was passed on to Alex. My husband and I were extremely relieved when all the test results came back negative and his hearing was normal, too. When I got the call from the doctor that the MRI was normal, all that I could do was hold Alex tight and cry. I was so relieved that he was ok.

When families begin the adoption process, family and friends always ask, “Well, what about the unknown medical issues that can come up?” I can tell you that after more than 24 doctor appointments (I stopped counting in December), including specialists, Baby Well checks, and surgeries, that it does happen. That is the risk we take when we become parents, whether we give birth or create a family through adoption.

Alex had been home less then six months. This is usually the time where you spend days just getting to know your child. In my case, I guess you might say I did my bonding with Alex in the doctor’s offices. I was able to hold him while they administrated the anastegia, when he had his cataract surgery, and tubes put in his ears. It was very important for me because I wanted him to be able to know it was his “Mommy” holding him while he went to sleep. Mario, our five-year-old who is also adopted form Guatemala, has been very protective of his little brother. But it has been hard for him to understand what is going. Jim and I have explained to Mario about Alex’s medical conditions and he told us that Alex is just a “little sick.”

Jim and I know that Alex will have challenges, but we need to help him and be there with him. At the moment he is receiving physical therapy once a week. He is doing really well. When you have a child with special needs, you celebrate the little victories. For example, when Alex first sat up by himself for more than 30 seconds, I could hear Jim cheering and shouting, “Come here! Alex is sitting!” There was also the first appointment to the neurologist when Alex finally rolled over. These little victories happen at any time so we are always watching and cheering on when they do happen!!

We are not sure why Alex is developmentally delayed. I can tell you it has nothing to do with being adopted, or anything that happened in Guatemala. I have heard it said that the child who becomes a part of your family does for a reason. Jim is a physical therapist and I work with special needs children as well as having a sibling with special needs. I guess he was meant to be a part of our family. Alex is now 11 months old and it has been just wonderful to see his little personality come alive. I remember when we brought him home in September and when he couldn’t put weight on his legs. Now he is rolling all over the house! He is a very sweet, happy baby boy and we could not imagine our life without him. Our family is truly blessed that Alex is our son.

If you ever find yourself in the type of family situation that we have, keep the faith, find time for each other, and take time for the other children in the family. We are very fortunate we have wonderful friends and family who have given us lots of support through out the last six months.