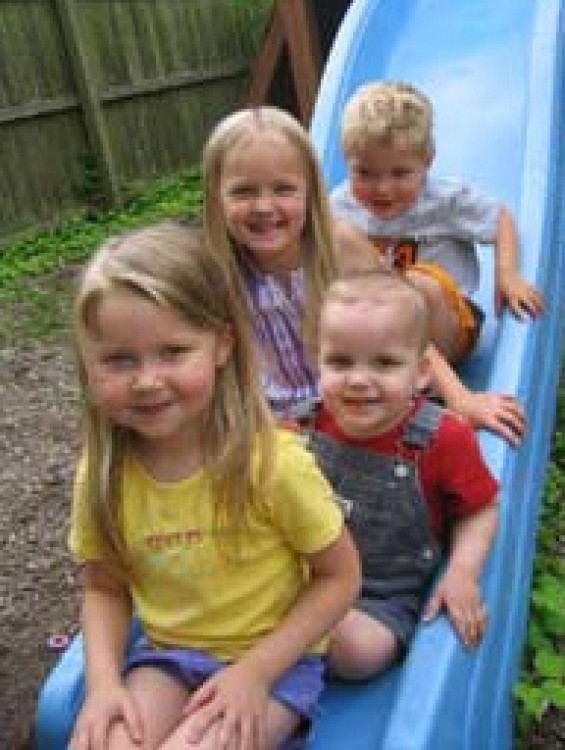 Talk about an instant family! My husband and I signed up to adopt TWO siblings and wound up with FOUR! Our adoption story spans three out of our four years of marriage, and I think that I can safely say that we are a team for life after the roller coaster of a ride we have been on. Here is our story on how we went from adopting 2 siblings, to 3 siblings, to 4 siblings, all thanks to the Russia Team at Wide Horizons.

Like a lot of people, I really had no idea where to begin with researching adoption, so I just bought all the books in Barnes and Noble and started reading. The Internet was also filled with information, but so much it was scary, so I just started making appointments with various adoption lawyers for domestic adoption. Even though I was set on adopting domestically, I also signed up for various international adoption agencies informational meetings, just for the heck of it. I mean really, I wanted an infant, a baby. The first meeting that we were scheduled for was on a Wednesday night in June 2003. The agency was Wide Horizons for Children in Oyster Bay , New York . Why not we figured, we'd swing by my parents who live nearby in Huntington , have a nice dinner in Oyster Bay , then head over to the library for this 2-hour informational meeting. Well, we walked out of that meeting knowing that we were adopting internationally, specifically from Russia , and its all thanks to Charlotte Torti, the social worker that headed the meeting.

Choosing Russia as our country was easy for us. Most countries require that a couple be married a certain amount of years. There were only 2 countries, Russia and Ukraine that would allow us to adopt even though we were only married 18 months. We chose Russia because we were more likely to get a child under 2 years of age. Knowing that we wanted a large family, and also figuring that this process is going to be challenging, we planned on adopting a sibling group of 2, then in a couple years, going back for a second sibling group. Well, I guess someone upstairs had a different plan for us!

We began the home study process in July 2003, Charlotte happened to become our social worker. The home study process was a bit intimidating. I knew that the purpose of the home study process was so that they can get to know you, then write a story about you so that you are matched with a compatible child, but I was still upset by it all because biological parents don't get the third degree about becoming a parent, why do we have to? But we survived, thanks to Charlotte being an easy person to talk to and truly making the process as easy as possible. She wrote a terrific home study report about us, and recommended that we be allowed to adopt a sibling group of two.

Next came the dreaded dossier. I didn't even know what a dossier was until Charlotte explained it to me! This gathering of the documents drove me nuts! But we got it done and submitted our completed dossier back to Vica Nikitina, our Program Coordinator, in December 2003.

I was doing pretty well up to this point. I was keeping very busy with the home study meetings, mandatory adoptive parenting classes and gathering all the dossier documents. But now it was time to do nothing but wait. It was the hardest thing to do. So now I had to find other stuff to occupy my time, keep my brain busy, while I waited for that phone call; the one that says you've been matched with a sibling group. I mean, I did work full-time. I was active duty military. I was actually away from home on a military assignment for about 3 months during this process. Then, while I was away, my husband got the phone call in February 2004. We were matched with a pair of 2-year-old twins! We were so excited we called our family. I completed my military training and came home, thinking we would be traveling soon to meet the girls. Now we were waiting for Charlotte to call us with our travel dates, but when she called, she had bad news. The biological mother came for the twins. We were devastated, to say the least. We didn't think that we could lose a referral! Well, in the back of our heads knew it was possible, but we didn't think it would happen to us! But it did, so now we had to deal with that, and wait some more for a new referral to come in.

On a Sunday afternoon in May 2004, we got a call from Charlotte . She had a referral for us, but didn't know if we would accept it. It was for a sibling group of THREE, two girls and one boy! We were so excited we accepted right away! The next day, Vica called us with our travel itinerary and we flew out to meet the kids that Saturday.

The Wide Horizons staff in Russia is just as fantastic as the Massachusetts team. We were told that someone will hold our hands through the entire process, and they meant that literally! We had the most wonderful experience in Moscow and in Yekaterinburg!

Meeting our kids was the most exhilarating moment in our lives. The girls, Julia age 4 and Kasenya age 2, were just adorable even though their hair was cut real short and they were very thin. Zachary was in the hospital with the chicken pox. He was 10 months old. All three kids had typical Russia medical diagnoses. Nothing that couldn't be addressed in the States. All three kids were just so accepting of us and after three days of visiting them, we knew they would be our children. And so began our journey home in order to complete yet more paperwork to bring our babies home!

In between the two trips was tough because we had to gather more documents, but also because we now had faces and names put to that referral. The time went by quickly I must say, and in August of 2004, just about three months after meeting the kids, Vica called us with a court date of August 18th, and off we went! We arranged to have my parents fly to Moscow in order to help us bring our three kids home.

Court was about 45 minutes. It was relatively easy. It is more of a formality than anything. The shocker we got in court was the fact that we were told that a fourth sibling has just been born! I could have died. FOUR? Holy cow! Well, without even thinking we knew we were bringing that baby home as well, but he would have to be a separate adoption since he was just born. Unbelievable we thought, so much for adopting two at a time! But for now, we must concentrate on getting these kids home and settled before we start all over again!

We eventually made our way back to the States on August 25, 2004 . Thirteen months after beginning our adoption journey. The language barrier between the girls and us wasn't as horrible as we thought it might be. They spoke Russian amongst each other, but we learned basic phrases in Russian to communicate with them. They actually spoke English after a month! Adopting older children turned out to be awesome because we were able to do things with them like amusement park rides and ride bikes and not wait for an infant to grow up to do it! A blessing in disguise! Our three kids adjusting great and they are thriving in their new family!

We had to wait the required 6 months before beginning the adoption process again in order to bring Jeremy home. His adoption process was much longer and more difficult than the first since the laws and requirements in Russia change almost daily. But we refused to let any judge or any laws prevent us from bringing home the biological brother to our three kids, and we fought a long and difficult battle and won. Jeremy Joseph arrived home on July 7, 2006 , nearly 2 years after we first called him our son. So now our family is complete! Two boys and two girls, all from the same family! I guess you better be careful what you wish for! We started this process asking for 2 kids at a time, and got 4!

Wide Horizons is by far the most incredible adoption agency. They were honest and kept us in the loop through the entire process; the entire staff is just amazing. We consider them our lifelong friends and we already recommend them to everyone that asks us about adoption. I wish more people would be open to adopting sibling groups and not be so hung up on wanting a baby as I was because they are all such beautiful, wonderful children, and my FOUR kids are known as Mama's Babies even though they are big!