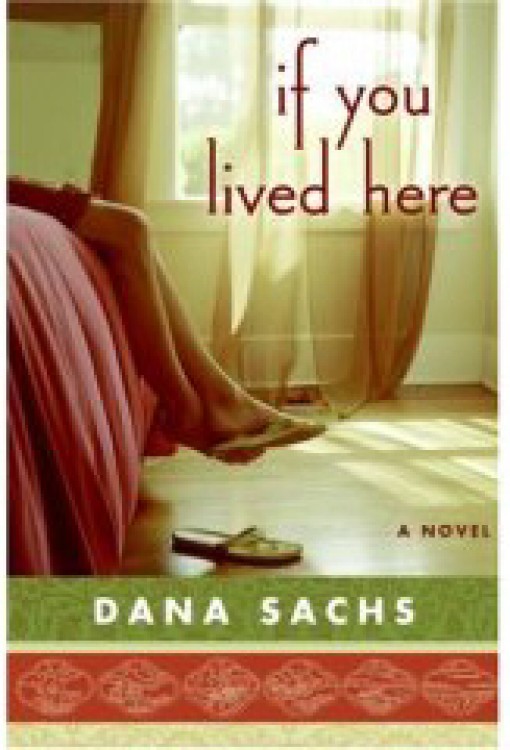 The world is so loud these days. It's not just the incessant honking of horns and people standing in supermarket lines shouting into their cell phones about things only their shrinks should know. In the world of entertainment, the volume is deafening. Movies are filled with action scenes so loud they shake the theaters. Television is filled with people screaming at each other so they won't get voted off the island. And books are filled with the wails of authors whose parents done em wrong. It would seem that if you want to be noticed, you must shout. But in truth, shouting only ensures you are heard. Speaking with poise and a quiet faith in your story promises that you are listened to.

Author Dana Sachs deserves to be listened to.

Although Sachs' first novel, "If You Lived Here," is filled with dramatic moments, she does not raise her voice to draw your attention to them. Instead, as she tells the story of an American woman, Shelley, who wants to adopt a Vietnamese boy, and the story of a Vietnamese woman, Mai, who is coming to terms with her sorrow-filled past, she explores hope and tragedy in the same way they occur in reality: gradually unfolding them with expanses of real life tumbling around in between the big stuff. The defining moments in "If You Lived Here" are not when Mai does or does not reconcile with her family or when Shelley does or does not adopt the boy, but the episodes that bind these. An overnight drive that Mai and Shelley take. A letter that Shelley's husband, Martin, sends to her.

Beginning in Wilmington , North Carolina , the novel finds Shelley, after too many miscarriages and failed adoption attempts to count, at odds with Martin about adopting a Vietnamese boy. A mortician and Vietnam War vet with two grown sons, Martin has grown world weary and burdened with the realization that he does not have the energy to raise another child. He does not have the energy for all that worry one more time. But Shelley has come to see the boy as her last chance to have a child. Whether or not this is true doesn't matter. After all that Shelley has been through, it's what she believes. What she has earned the right to believe.

As Shelley obsesses about the boy, she befriends Mai, the owner of an Asian grocery store, to learn more about Vietnam . Twenty-three years earlier, following an accident she believes was her fault, Mai fled Vietnam . Technically, she was a boat person, sneaking out of the country by boat like thousands of other Vietnamese during the late 1970s and early 1980s, but her reasons set her story apart. She was not fleeing political oppression or poverty. She was fleeing a judgment that she was unable, at the age of nineteen, to bear. Her presence in Wilmington is a kind of self-imposed exile, a separation from her loved ones and any kind of Vietnamese community that might give her solace. But Shelley's appearance in her life, along with her pestering questions about Vietnam , force Mai to think about her homeland: not only the event that caused her to leave, but everything she loved about it.

When it is clear that Martin will not go back to Vietnam with Shelley to adopt the boy, Shelley convinces Mai to accompany her. Although the two women are not friends in the conventional sense, they are allies, and as the story follows their intersection, it becomes a meditation on the meaning of choice, and how powerful and life altering a single, simple choice can be. It is a reminder that every day you make choices both large and small, and every choice has an effect on your life. It is also a reminder that although a choice can never be undone, it does not have to be final. New choices can be made.

"If You Lived Here" is also interesting in the light that it sheds on the subjects of mortuaries and Vietnam , sometimes both at the same time. Martin's descriptions of working in a morgue in Danang during the war illuminate an entirely new aspect of what is one of the most written about episodes in American history. Yes, everyone knows about the 58,000 Americans who died over there. But Martin knows what they looked like when they died, and although Sachs never plays the gore factor, she effectively brings the point of pointless death home.

As for Vietnam , anyone who has read Sachs' book "The House on Dream Street " is aware that she knows Vietnam . She lived there. She loved there. And it is integral to her life's work. That said, it is still a difficult thing to get inside the head of a character whose culture is not your own. But Sachs' does a marvelous job of letting Mai be Vietnamese. You will find no caricature here. Nor will you find any attempts on Sachs' part to make Mai "relatable." Some of the things Mai does are just plain contrary to the American way of thinking, and Sachs, admirably, does not try to explain, quite simply because Mai would not explain, because Mai would not know there was anything that needed to be explained. She, like Shelley, is not trying to explain or rationalize herself. They are both simply telling you what it would be liked if you lived their lives. If you lived here.

Contributed by ThingsAsian, an Asia travel website with maps, stories, photos and travel tips contributed by a worldwide community.