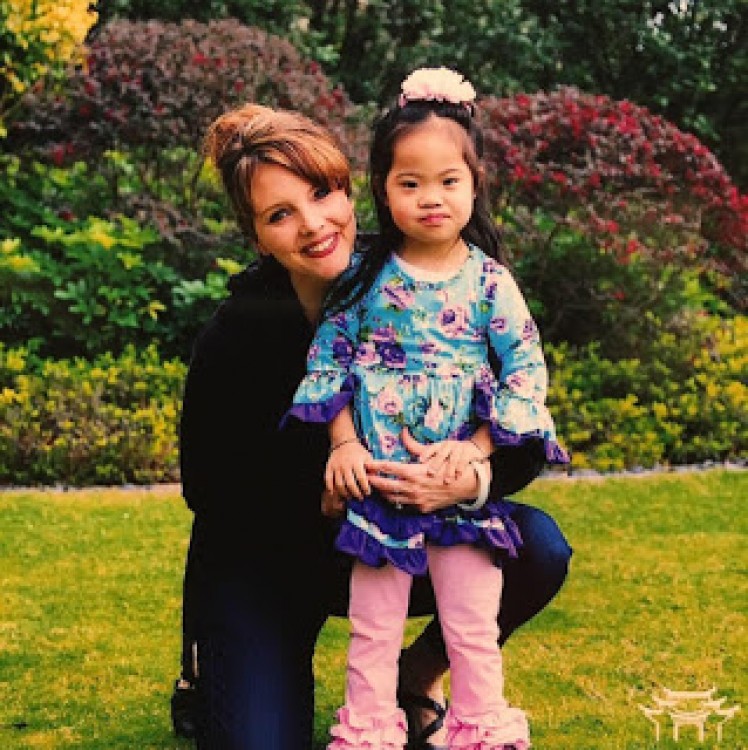 A lot of people have asked me how we decided to adopt a child with Down-syndrome. Honestly, I wasn’t one of those amazing people who aspired to adopt special needs children when I was young. I really didn’t even like babysitting when I was a teenager, and I thought that being a stay at home mom sounded really boring! After my husband and I had our first daughter back in 1993, we tried for a few years unsuccessfully to conceive again. My heart yearned for another child, and so we domestically adopted our beautiful son, Stephen, as an infant. As these two got older, I realized that I really loved being a mom, and didn’t want to be an empty nester, so we decided to adopt again, this time from Taiwan. At that time our hearts were still growing, and although we were open to international adoption, we wanted to be matched with a “healthy infant with no, or very minor, special needs.” When we were presented with our son, Jason’s file, he was not an infant, but a 14 month old, who would come home later at 22 months and would be diagnosed a few years later with Autism. This sweet boy has changed our lives and grown our hearts.

Fast forward a few more years, and this time my husband witnessed a dad who was helping his beautiful daughter, who was in a wheelchair at a restaurant, making him wonder if maybe we shouldn't be done adopting. Well, you know I was all over that, and it wasn’t long before we decided to adopt a child with special needs from China. Raising our son with autism made us realize that we could do so much more than we ever thought we could as parents, and helped us to be more open to other special needs. This time around we discovered a medical term that was new to us, called “Hydrocephalus” or to put it briefly, a buildup of too much cerebrospinal fluid in the brain. Our Annie, age 7 at the time, had this diagnosis, and after conferring with our doctor we decided to bring this beautiful little girl home. A bit later in the process we would add Wyatt, who was four at the time and had the same diagnosis. With these two we really had very little idea what their long term needs would be, or how they would be affected developmentally. However, we decided it really did not matter! Whether they had incredible IQs or were never able to catch up developmentally and academically, it didn’t matter. We hoped for all of our children that they would be able to become self sufficient adults, for their own sakes, but if they weren’t able to, that was ok as well. We were open caring for any of our children that needed us for as long as they needed us.

After we came home with Annie and Wyatt in January of 2016, I started thinking about a little boy with CP that I had met on a trip with Gladney’s Superkids several months before. Of the hundreds of children we met in those two weeks in 10 different orphanages, he was the one that stole my heart. Unfortunately, his file had not yet been prepared, but once again after having been home for only a few months, I started thinking about going back to China. I started looking through the Waiting Children list on some of the different agency websites. (So, finally the answer as to how we decided to adopt a child with Down-Syndrome!) As I was looking through the pictures and descriptions of waiting children with various special needs, I found myself passing over those with Down-syndrome! And it was because of this my heart realized that that was exactly who I wanted to adopt! I remembered the year before when we already had pre-approval for Wyatt and Annie, that I started seeing other adoptive families who were bringing home their beautiful children with DS, and what a blessing those little ones were to their families and visa versa. I remember thinking at the time, “Oh, that would have been a neat thing to do as well!” Then it wasn’t until the lightbulb hit me almost a year later that I realized it was what we should do. I took my husband out to a restaurant and told him, “Honey, you know how I’ve been talking about adopting again? Well, I not only think we should adopt, but I think we should adopt a child with Down-syndrome!” I honestly think it was this that made him eventually say “yes” to adopting again at all. It was such a big step in faith and in so many other ways. His answer was that when we were trying to conceive many, many years back, he would pray that we would not have a child with Down-syndrome. That sounds terrible, but it is very honest. Now years later as our hearts and faith have grown, he too realized that it was exactly what we should do. Of course it took a bit longer for him to come to a firm “yes”. He wasn’t hooked until he saw Rosalie’s picture, and then it was her or no-one! We would later decide that we wanted two little girls with Down-syndrome so that they would have each other as they grew older. And what fun that has been! Rosalie and Lucie’s different personalities really blend together well.

So, this is how our hearts have grown and evolved in the adoption world over the last several years. Our lives have become very different than they were before, but very wonderful and full. We didn’t go into any of our adoptions having great knowledge of our children’s special needs, but a commitment to love those children no matter what their needs were when they came home, and for as long as they need it. I encourage anyone considering adopting a child with Down-syndrome to get to know other families on Facebook who have adopted kiddos with DS. Not every story has a silver lining, but you will meet so many that have been blessed by having one or more children with DS. I know the road ahead will be hard at times, but already I can’t imagine not having these amazing girls in my life.

New Rules to Adopt from China