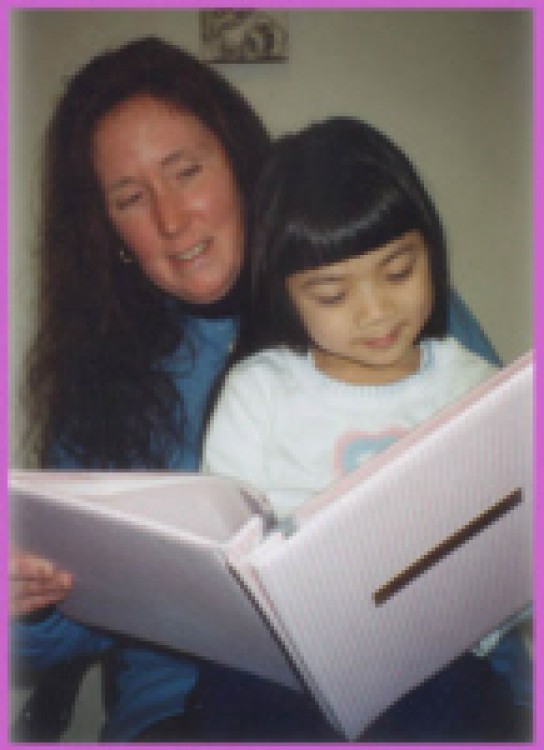 The documents send shivers up the spine, and the photos bring tears. Going through photo collections and saved paperwork is like entering a time machine. What happened only six months ago feels like six years, or maybe another epoch. There are pictures of us as a hopeful couple, and then BOOM. A child. Our child.

The photo boxes are heavy. Before we started accumulating pictures of our child, we accumulated paper…lots of it. In fact, we made our baby with paper. Not my idea of sexy.

It’s a big job to organize all that stuff. I bet the job is magnified by the time in between: The longer you wait to assemble a cohesive chronology, the slower you are when you finally get to it. When I was finally ready to tackle this project, I was done with the adoption announcements, and the Thank You’s. The homestudy documents were neatly piled. I put together the lifebook text. And then I was so done with doing this on my own. Remember those wedding vows? To love, to honor…to help organize the adoption record.

My husband says he is allergic to paper—the kind of paper that makes up dossiers, lifebooks, and such. Despite being a social worker, who typically puts together paperwork, I went brain numb over dossiers, INS forms, and medical forms. I never did read the fine print (“expires in 90 days”) until it was too late. We had a small pile of medicals by travel time.

The kitchen table once again was covered in paper. This time around, we put up barriers to keep our walking, poking, pulling toddler from getting her hands on those precious pictures. Where to begin?

We pulled out one package at a time. Each seemed to have a theme: baby shower, baby shower at work, referral pictures, travel pictures, and then home, with our child. I knew in my heart of hearts that our daughter would have no interest in the time before she arrived. After all, didn’t life begin when she graced our life?

The big dividing line was her. We managed to pull out all the pre-placement pictures of us and get them into labeled packets. We even put a few really good pictures into a special envelope marked “enlarge.” And we made a lot of piles of pictures; pictures, pictures everywhere. It was exhausting, a real feat. And that was only Session One. It had only just begun.

I knew that Polina, at 18 months, was ready to start taking in images of her early days and her birth country. She was looking at pictures of her younger self. I wanted our home to be covered with frames that reflected her life as a whole and honored her heritage.

We needed not only that lifebook and its healing text, but now, a new dimension of lifebooking. I don’t even have a name for it; maybe ‘transforming the living space with visuals.’ I know for certain that all of this will go into her little psyche and help soothe her soul. She will never not know.

But remember this was a joint project, and my partner had a different vision. His idea for photo frame #1 was a shot from her first birthday, sitting in our kitchen. It would be spectacular under normal conditions, but not for this project. Not just a pretty picture; we need her past, as well as her present.

“Honey, we must have vertical pictures from the orphanage that you like.” The search was on. I tried to be good and not shoot down his choices right away. “Yup—I like that one—but what about this?”

So imagine being married to me, an adult adopted person with years of control issues! A stubborn (or is it determined?) person, who is convinced that her way is the only way. A social worker who insists that everything in the house has to have clinical roots, or forget it.

Photo organization is not a one-day project. It also is not for the faint of heart. Just like the lifebook, it requires that we push, push, push, over time.