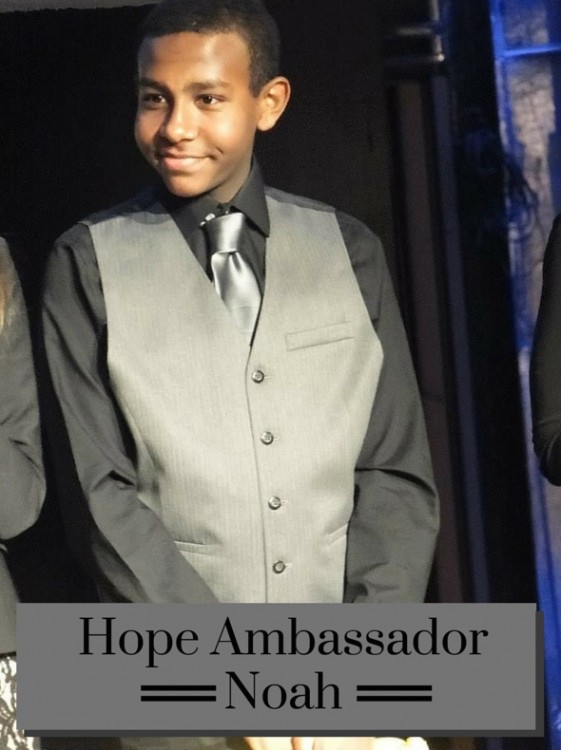 Noah, who was born in Ethiopia and lived there until being adopted by a US family at the age of 6 years old, was himself inspired by another Ethiopian adoptee.

"He was a boy who lived near my aunt in Washington State," Noah recently shared, "he was doing a project to raise money so he could provide a well for his birth-village in Ethiopia. I thought 'this is so cool', so I decided to help him raise the money and I made some weavings for him to sell."

In 2011 Noah decided he wanted start a project of his own to give back to his country of birth. He had learned the art of weaving in third grade and connected with it because it was an art form that is embraced in Ethiopia. Combining his love for Ethiopia's culture and his compassionate spirit, Noah formed a weaving group among several of his classmates and they sold their weavings for $5 a piece with 100% of the money going toward a clean water project in Ethiopia. That was over $5000 ago. Since 2011, Noah's projects have brought clean drinking water to six communities, touching the lives of over 1,000 people; 3 completed projects are in Ethiopia, one in the Democratic Republic of Congo, one in Nepal, and one in Rwanda.

We spoke with 12-year-old Noah recently about his dedication to bringing hope and practicial solutions to struggling communities:

Can you share a memory of your life in Ethiopia?

When I was in Ethiopia I loved to eat sugarcane; you would have to buy from a man who would walk around with a six-foot long sugarcane stick. He would cut smaller sticks from that with a machete and sell them. They were like candy.

What do you remember about the day you came into your adopted family?

When I turned the corner with all of our luggage and I saw all my new family and friends and my siblings and my dad and sister I said to myself that these must be my new family. When we drove back to our house and pulled into the driveway I thought it looked like a palace. I had lived in a shack in Ethiopia. I didn’t understand that this was going to be the new normal though. What I remember the most about my first days was our refrigerator. I remember opening the door and looking in at all the food lit up and thought it was a god because I got everything I needed to be happy. I could pull something out and eat it and go back and get some more. It never got empty. It was always full. Every day.

What led you to do a project through charity:water?

My Aunt Sue knew a family from her town who had three kids adopted from Ethiopia. We visited them a few summers ago. One of the sons was doing a project to raise money so he could provide a well for his birthvillage in Ethiopia. I thought what he was doing was cool so I decided to help him raise the money so I made some weavings for him to sell. I learned how to weave when I was in 3rd grade at school and I was doing some weavings that summer to keep busy. After he had gone to Ethiopia to help put in the well I decided I liked the idea of helping other people who don’t have what I have so I kept weaving and sold those weavings. I got a group of friends and we started weaving and raising money. My mom researched how we could get money to people who need clean water and she found charity: water. What we liked about it was that 100% of the funds donated go directly to the water projects.

Do you know where your water project funds were donated? charity:water gives us updates on where our funds have gone. We share funding a project with other charity:water campaigns. When a project is done they send us pictures and a map and GPS of exactly where the water project is. We have 3 completed projects in Ethiopia, one in the Democratic Republic of Congo, one in Nepal, and one in Rwanda.

How did you feel when you realized the impact of your project on those who received a clean water source because of your work?

I am pretty thrilled and also shocked on how much we have done. We were just a group of kids who started this.

Have you visited any of the villages that you have impacted with your project?

Describe the process of Weaving for Water. We get donated yarn. My grandma’s retirement home donated a lot! We also have looms that were made for past art projects at our school but you can use picture frames too. During free time, when our teacher would do a read-a-loud book the kids picked up their looms and listened to her read while they weaved. Once the weavings are done they are taken off the looms and are ready to sell. The first time we did this we sold our weavings at the holiday bazaar. We made over $500 that day. We open up a 90-day campaign on My Charity Water at charity:water and during those three months money comes in from sales and just people telling other people and they donate. We repeat the cycle a few times a year so we can constantly have an income into the account.

How do you spread the word?

I am asked to speak about it. Last spring I went to a local Elementary School and spoke to the entire third grade. They were doing a science unit on water and the teachers wanted the students to learn about the worldwide water crisis. I talked to them about that and also about my Weaving for Water project. During their art time they weaved and at a family art night they sold their weavings. I was invited back for that night and sat with them. At the end of the night they had made over $700 for Weaving for Water!  I have also talked at a retirement home and in a few high school social studies classes. More and more opportunities to speak have come up as time goes by. Last week I Skyped about the world water crisis with a 4th grade in the Seattle area and also was the keynote speaker at a Model UN conference.

How much money does it take to bring clean water to a community?

Different situations in each village affects the cost that is needed so in some villages it may be that they have a well but it is breaking and they cannot access their clean water source so some of our money we have raised may go to fixing that well. In other cases a village may need a well in general and that might cost from $15,000-$20,000. It isn’t cheap but it will last a long time hopefully. To put it into perspective it takes $20 to save one person’s life providing clean water.

When you watch and read Marvel comics and movies you see them flying and probably picking up 10,000 pounds with no problem, and you may wish you were a superhero too and you can be, even without the superpowers. So my way of being a superhero is that I found a situation in the world that is not good and I asked myself, “What can I do? What do I like to do that can make a change?” and I did something about it. You can use your talent your own way to do something about making a change because it is within everybody’s heart to be a hero. The hero is within you.

Contact us if you know of an outstanding young person we can feature as a RainbowKids Hope Ambassador.