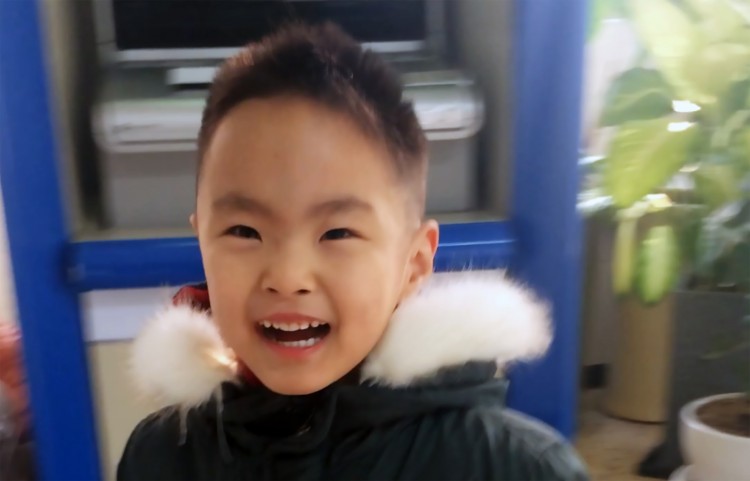 Jaylenn (RK# 39144) is waiting outside of his group home on a beautiful sunny day while the cherry blossom trees are still in bloom. He is eager to have visitors and greets the four of us with a huge smile and quickly ushers us into his home. Excited to see visitors, Jaylenn spins around a few times and flashes a beautiful smile on his exceptionally handsome face.

My first thought is, how could he be here? Why isn’t he with a forever family?

He is so sweet and surely someone would want him to be their son!

Jaylenn has been waiting for a family for over four years.

An early history of prenatal exposure to alcohol and smoking placed him in a higher risk category as an infant, and an MRI revealing Rt. Pachygyria as a toddler made home-finding more challenging. Because of his difficult beginnings, his opportunity to find a family has now narrowed.

But Jaylenn has thrived despite his early obstacles. He is a healthy and energetic 5-year-old boy bursting with laughter and smiles, and he loves to play — whether with toy trucks and cars or while watching and singing along with his favorite cartoon, “Catch You Boy.” He also loves dinosaurs and he quickly pulls out a book about dinosaurs to show us. Tyrannosaurus Rex has captured his imagination.

When we go outside to play, Jaylenn runs to put on his ankle brace without anyone reminding him. He quickly puts it on his foot without even looking down at the straps. Jaylenn shows no impediment in movement; in fact, Jaylenn seems extremely athletic and coordinated in both fine and gross motor skills. He instantly makes friends with a young man in a wheelchair who works at the care center and decides that he wants him to come along and play as well. Jaylenn flashes his beautiful smile and asks if he can push his wheelchair. The gentleman agrees, and Jaylenn uses all of his strength to push him — and he succeeds! He laughs and then stops to flex his muscles and show off his superhero biceps!

For a child that showed early balance issues, Jaylenn thrives with physical activity and shows natural grace, agility and strength. Jaylenn is not without a sensitive side either. As we move outside, he comes alongside me and reminds me that I left a bag inside. Jaylenn wants to make sure that I didn’t forget anything and his thoughtfulness is touching, but also shows that he has a strong sensitivity and awareness of others. While outside, he keeps up conversations with all of the adults, and communicates cheerfully.

As Jaylenn laughs and smiles freely, his contagious spirit soon has everyone laughing and playing, and I quickly forget that I am with a child who needs a family. His joy is so abundant! Jaylenn is a happy and independent little boy and it is clear that despite all of his losses — of both his birth parents and his foster parents — Jaylenn loves life and loves people.

Jaylenn will thrive in a family that is active and loves to spend time outdoors. He would be a fun and energetic playmate for other children, and his happy and extroverted nature will lead you places you never could have anticipated. Would you like to go there with Jaylenn?