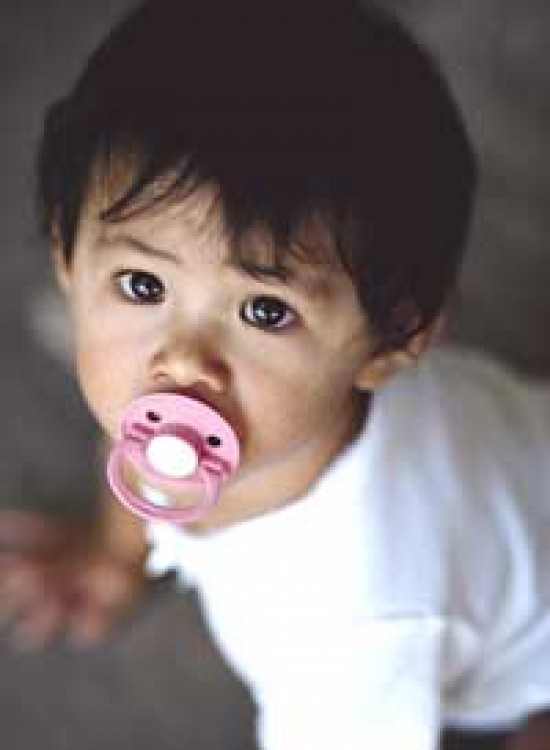 Helping a toddler adapt to adoption has its special considerations, especially when the adoption requires foreign travel and the child does not speak the same language as the adoptive parent(s). We brought Ashley home from Hanoi at age 2 1/2, and her adjustment went very well, I think. Following are some suggestions that worked for us.

From the first moment, keep things as “normal” as possible for the child. This means, what the child is used to, not what is normal for the adoptive family! Honor nap and bedtime schedules, stay with familiar routines, etc. It is too much to expect a toddler who has (often) been in one institution for most or all of his/her life to suddenly relish a complete lifestyle change. Take things slowly, and one at a time, when possible!

These toys came in very handy: Magnadoodle (we took a large one, although there is a smaller travel size available), playdoh, plastic “texture” tools and cookie cutters with a plastic placemat, beach ball, stacking cups, bubbles with wands, plastic animals, markers with paper and a thin colorbook, tiny “chunky” books, and a magic wand (this is a clear plastic wand filled with thick clear liquid and glitter objects that gravitate in different directions when the wand is waved). The doll we took was ignored. We used an umbrella stroller in airports and hotels, and were glad we had it.

For Ashley, the magic wand and a dinosaur toothbrush became her “security objects”. She clutched them in her hand everywhere we went. I highly recommend having two of each... the magic wand was inadvertently left on a plane at the end of our trip. Fortunately, by then she had a brother to distract her and it wasn’t as traumatic as if she’d lost it in Viet Nam. She also loved the playdoh. We spent hours shaping and cutting playdoh. We bored of it quickly. She could have done playdoh infinitely! (We kept the playdoh out on the plane. I chased little bits of playdoh constantly, but it kept us both busy and helped time go by.

We also found that the various governmental meetings weren’t scheduled with naptime and mealtime taken into account. We had taken along packages of snacks and they were a lifesaver. We never went anywhere without them! And we could have used more. We took (individually wrapped - it’s very humid and things in large open packages get “soggy” quickly) peanut butter sandwich crackers, Ritz Bits cheese sandwich crackers, goldfish, cereal bars, pretzals and animal crackers. We didn’t have juicepaks along, but a few of the smallest ones would have come in handy a couple of times!

We mostly took summer-type clothing, which was fine. However, these children are not used to air conditioning, so a light sweater or sweatshirt and sleepers at night are a must for inside times!

The biggest thing I can stress is ONE CHANGE AT A TIME! There is so much to adjust to, and many things can wait. Here is the order we used for getting her used to new and different circumstances:

She was terrified of the dog. We used baby gates and interacted ourselves with the dog a lot while she could watch. Each day we got her a little closer to the dog without her realizing what was happening. Sometimes I would hold her in my arms while I petted the dog. Finally, I wound up with her sitting on my lap and the dog sitting next to the chair with me patting its head. She also watched my son roll on the floor with it. Her curiosity eventually got the best of her...it took about a week and she was down on the floor with the dog. We did not introduce any other avoidable changes during this time. Our objective was : get her used to the dog this week.

During the first few weeks home, I cooked her noodle and rice dishes in addition to what I normally served. She likes food and is not a picky eater, so she eventually moved from eating mostly noodle and rice dishes to a wide variety of items. But we didn’t force the issue. She always had “familiar” food available if she wanted it.

There was no hurry on the day care, as I was off work for several months. When I would drop my son off for day care, I let her play there, too. We stayed for about an hour, and then we’d head home. This went on for a couple of weeks. Then we decided it was time to try a quick separation. I left for 5 minutes to take my son to preschool (3 blocks away). The first time she panicked like no child I’d ever seen before. It was heartbreaking. The second time she wailed, but didn’t panic. The third time she happily pointed to the window, where she had been encouraged to wave goodbye, and ran over to wave goodbye. That was that. She knew I’d be back in 5 minutes, and she knew the “routine” of waving. She was OK. Over the course of several weeks, we increased the amount of time I “disappeared” to longer and longer periods of time. We also included having her eat breakfast during that time. After about 3 or 4 weeks I was able to go in to work for a special workshop that had been planned and I wanted to attend. It worked fine! However, we did not work on any other adjustments during this time!

Ashley was used to sleeping in our bed “on the road”. We did not expect her to think sleeping alone in a big bedroom was appealing. We put her little youth bed at the foot of our bed, and she slept there for both naps and nights. And I sat in the room reading while she tried to get to sleep. At no time did we think she’d be comfortable alone in a big room. After we got her used to the day care, I started having her nap in her own room. I would stay in there with her, reading or writing in my journal until she fell asleep. Then I would go about my business. She never did panic when awaking alone in the room, but she did come looking for me ASAP. After a couple of weeks of naps in her room, we moved the whole youth bed in. She seemed ready, and was proud that she was a “big girl”. I continued to remain in her room until she was asleep. When I felt she was ready, I said, “I have to put this in my room. I’ll be right back.” And I would leave and come back quickly. I did this almost every night, and slowly increased the amount of time I was gone. She never noticed, as far as I could tell. Eventually, I just didn’t come back until after she was asleep. That made an easy transition to the routine of a story, a kiss, and she did her bedtime alone. And I kept a mattress close by in case she woke up in the middle of the night. Instead of inviting her into our bed (we didn’t want to set that precedent), I would sleep on the floor in her room until she went back to sleep. She was fine with that.

Although she was somewhat potty-trained when we took her from the orphanage, we lost it during travel. The language barrier and lack of public facilities made it next to impossible. So, we kept her in pull-ups. We didn’t worry about potty-training until mid-August (she came home in early May). She then had enough English to understand what we wanted. She made the transition to training pants in about a month.

We were sneaky about this one, too. In May and June, when I would go to pick my son up, I would go early and have Ashley play outside with the kids. She got to know the teacher and loved the sandbox and swings, and couldn’t wait to visit each time. We revisited a couple of times during the summer, and she was looking forward to her first preschool day in the fall. Easy one!

I hope these suggestions are helpful. The transitions were sometimes slow and tedious, and I often felt “trapped” with the amount of necessary time I spent “being there” for her. But other than that first day care separation, she never had a “traumatic” moment. I think that has had a lot to do with what a great kid she is! She can’t wait to go to the “big school” next year (kindergarten!)