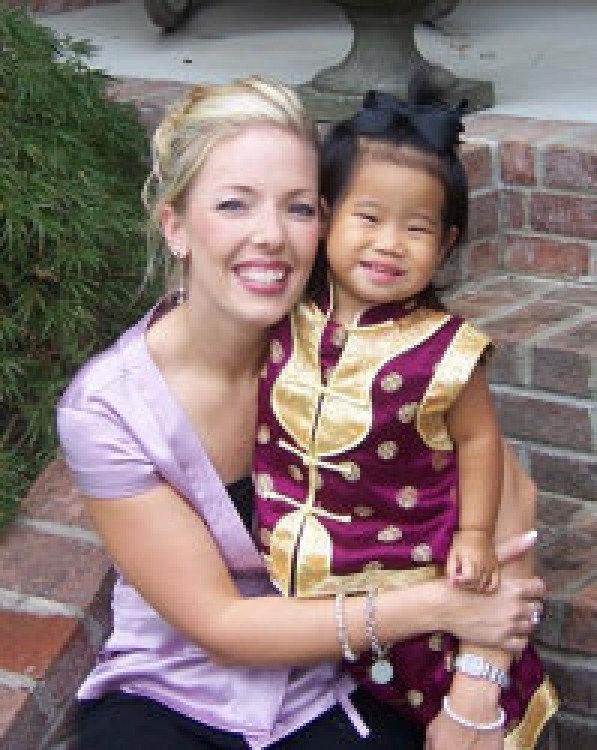 The moment was exactly as I had imagined it. They called our names as a blur of a person walked into the room holding her. I don't even know who held her, because all I could see was that beautiful face from the picture, now come to life. She looked exactly the same, and I could have spotted her on the streets of Beijing after the hours I had studied her sweet face from the referral picture. Our Hannah Li was finally in my arms! There was a brief moment of concern when we noticed the large bruise on her head, an indentation created from the hours she must have spent banging her head against her crib. But this was quickly brushed aside while we played with her (she wasn't even crying!) and even got our first smile! Now I feel rather naïve as I think back on that precious day. How many clues did I miss? How many subtle, yet clear, signs was she trying to send us that this road we were about to travel was going to be a little more bumpy than we had expected or prepared for?

The first month with Hannah Li continued as the first day…a breezy, honeymoon-like entrance into parenting our new daughter. After having raised 2 boys through the baby years, Hannah seemed like a piece of cake. We even frequently remarked to others this was almost “too easy”. She would play quietly on the floor for sometimes a couple of hours without demanding anything. She ate well and wanted to go to sleep without us fussing over her at all (which was really a blessing when you have 3 kids to put to sleep!). Then, one day after a traumatic visit to a doctor, the shock wore off and the reality of a year of life in an institution came exploding out of Hannah like a volcano.

What I can only describe as “emotional meltdowns” began to emerge once, then twice, then up to 5 or 6 times a day. The reason I don't really think “tantrum” is the appropriate word is because it was clear that her emotional explosions were much more complex, much more deeply rooted, and much more agonizingly traumatic than your normal run-of-the-mill toddler fit. Believe me, I have seen my boys throw themselves in the floor and scream because I took a toy away. I had never, however, seen a child (much less a baby) kick, scream, and rage until her whole body shook just because I wanted to rock her to sleep. I had never seen a child cry in absolute panic if I stopped feeding her for one minute to get something in another room. I had never had a child who desperately pulled her hand away every time I tried to hold it, pulled her face away every time my cheek touched hers, and pushed at me with both arms every time I tried to pull her to my chest.

Crawling into my closet in the dark one night after I laid her in her crib, I sobbed over my daughter's losses and grief and inability to trust me as her mother, my own grief over the loss of “natural” attachment that I had shared with my biological children, and my ignorance at the great sacrifice and cost it is to take a broken, wounded child and somehow help them find healing. I cried on that floor and asked God to help me find a way to wake up that next morning and refuse to let the kicks, the rejection and the cries cause me to fail Hannah's test…her test to see just how much I am willing to love her; just how determined I am to not abandon her; just how sure I am that I was meant to be her mother.

We spent the next year trying, and failing, then trying again to help Hannah heal. Each time we would think we were through the healing, another wound would seem to appear in Hannah. Layer after layer melted, slowly but surely. We did a great deal of holding therapy with Hannah, though we did not know there was a clinical term for it at the time. But our instincts just told us that if she pushed us away and screamed when we tried to hold her that the worst thing we could do was to not hold her. So we would cradle her in our arms and hold her even if she screamed her way through it! I also spent a great deal of time on the internet and phone trying to track down anyone I could who could help us. I talked to several social workers, adoptive parents, agencies and therapists trying to glean as much information as I could. Sometimes we received undue criticism or judgments from those who didn't understand. But it was worth it to keep seeking help whenever we would stumble across even a small bit of information that we could use. We also tried very hard to keep Hannah in routines that were predictable and peaceful. Large amounts of time spent at the mall, the school or church or other places in public were often detrimental to her well-being. We limited her time spent in over-stimulating environments and being cared for by others, making sure we did the vast majority of her care. At the same time, we tried to also balance our own emotional well-being by taking time for ourselves and as a couple to decompress and replenish.

Hannah is a child now, over a year later that, in many ways, barely resembles the child that was first placed in our arms. I often am in awe when she is laying across my lap, completely relaxed and snuggled up next to me of how much she has healed and how far we have come. She has truly become bonded in a way with us that I wasn't sure at times was even going to be possible. I still don't know why God called a naïve, inexperienced, impatient mom like me to help Him heal Hannah. I can only surmise that He enjoys the beauty of teaching a broken, imperfect, helpless mother how to lay down her life to help love a broken, imperfect, helpless child. At least I know I'm not alone. And now, neither is little Hannah Li.

Dawn Choate and her husband, Roger, are the proud parents of 2 sons, Joshua and Jordan (ages 10 and 7), and two daughters born in China , Hannah AiLi and Maggie JieLing (ages 2 and 3). They reside in Kentucky and are co-owners of a computer/software business. Dawn can be reached at: dawn_choate@yahoo.com