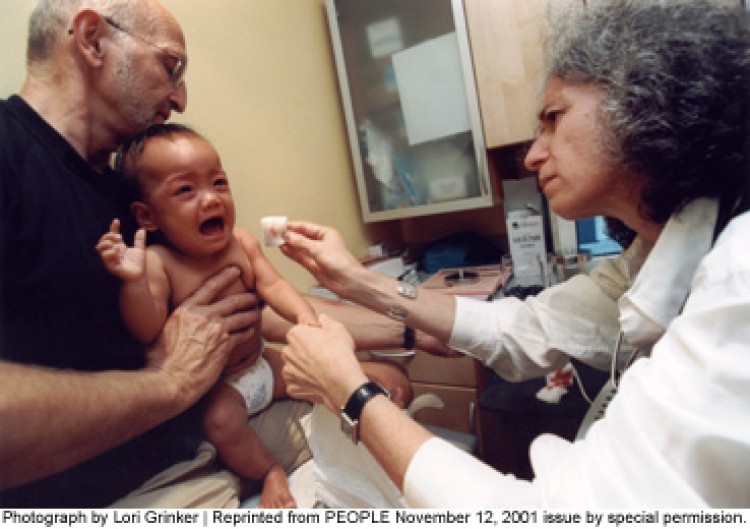 Dr. Jane Aronson still shudders when she recalls her visit to the infamous orphanage of Siret in northeast Romania late in 1997. There, hundreds of children were being warehoused as "psychiatric" patients, many shut away because their impoverished parents could no longer care for them. "It was late at night, the dead of winter," she says. "We went to the front gates and suddenly we were covered in kids. They came out like animals, wild things. The smell inside was beyond words, worse than a toilet. It made me gag."

The next day she and a team of physicians got down to their mission: They examined 200 children from toddler to teens - many malnourished and chronically ill - hoping to find some who could be made healthy and ready for adoption. Aronson eventually helped salvage at least 68 kids, of whom 16 went to American families. One preschooler was adopted by a colleague at Winthrop-University Hospital in Mineola, N.Y., where Aronson, 4, was then chief of pediatric infectious diseases. "I went back with her and her husband to get him," she says. "It was a moving moment in my life."

In adoption circles Jane Aronson is known simply as the Orphan Doctor. From all over the country frantic parents seek her help, as if consulting a master detective. For Aronson has a unique ability to solve the medical mysteries presented by children adopted from around the globe. The number of overseas placements with U.S. families has doubled in the past 10 years -- some 18,000 took place last year -- largely because there are more foreign infants and toddlers immediately available. Some of these children are plucked from the Dickensian squalor of places like Siret. Other orphanages, although more humane, are still breeding grounds for diseases rarely found in American youngsters -- rickets, tuberculosis and even polio. Aronson has visited dozens of those institutions, deriving special insight into the ailments that take root in them. "The good news," she says, "is that many of these problems can be resolved with proper nutrition and early intervention."

"She is just tireless," says Sharon Kaufman, executive director of the Joint Council on International Children's Services, the largest association of licensed nonprofit international adoption agencies. Now practicing privately, Aronson is among scarcely a dozen experts in the young field of international adoption medicine. Over the past nine years she has traveled to seven countries, treated 1,800 adoptees and evaluated thousands of orphans for would-be parents. In 1997 she founded the nonprofit Worldwide Orphans Foundation, devoted to improving conditions at orphanages around the globe.

One of Aronson's many success stories is that of 3-year old Vietnamese orphan Evan Sievers of Bedford, N.Y. From the time he could walk, he had dragged his left leg. His adoptive parents, Drew, 36, an Internet executive, and Ally, 39, a homemaker, saw numerous specialists, to no avail. Last winter Ally went to an adoption gathering in Manhattan. "Someone said, 'There's the Orphan Doctor,'" says Ally. Gingerly, she approached Aronson, who agreed to look at the case. Her conclusion: Evan's limp was probably caused by a polio vaccine that had induced either nerve damage or the disease itself. She recommended aggressive treatment, and today after surgery, Evan is walking properly. Aronson never sent a bill.

That wouldn't surprise her colleagues. "It's definitely a calling for her," says Dr. Jerri Jenista of St. Joseph Mercy Hospital in Ann Arbor, Mich., also an expert in the field. Adds Dr. Dana Johnson, director of the University of Minnesota's International Adoption Clinic: "She is doing this with her heart."

These days Aronson takes her job more personally than ever. Last year the openly gay pediatrician and her partner, Diana Leo, 55, adopted Benjamin, a Vietnamese orphan now 18 months old. "I'm crazy about him," Aronson says, noting that the experience has deepened her private and professional lives. Leo agrees. "Having Ben," she says, "has taught her even more about being a doctor."

A doctor is what Aronson always wanted to be. Raised in suburban Franklin Square, N.Y. -- the younger child of Selma, 79, a retired schoolteacher, and Harold, a grocer who died in 1990 -- she was enthralled by her great-uncle Dr. Joseph Aronson, renowned for his treatment of tuberculosis, and dreamed of following in his footsteps. But her road to medical school would be riddled with detours. "I was plagued by insecurity and a lack of confidence," Aronson says After high school she attended Manhattan's Hunter College part-time and at 25 earned her degree in biology and psychology. Six more years passed before the entered the University of Medicine and Dentistry of New Jersey, during which time she paid the bills working as a carpenter, photographer, teacher and bartender.

Upon receiving her medical degree in 1986, Aronson did her residency in pediatrics and in 1992 was hired at Winthrop-University Hospital. To gain deeper insight into childhood diseases, she began visiting orphanages in China, Russia and Romania and was often appalled by what she saw. "The children aren't talking, not laughing," Aronson says. "Their eyes are vacant. It freaks you out."

Resolved to help, Aronson started the Orphan Rangers in 1997. Part of her Worldwide Orphans Foundation, it's a brigade of volunteer health-care professionals and grad students who travel to orphanages around the world in the hope of improving conditions. Still, there was a huge void in Aronson's life. She'd always wanted a child, but her partner had balked at adopting. The couple split amicably after 18 years in July 1999. A few weeks later Aronson applied to adopt a Vietnamese child. In January 2000 she met Leo, senior director of development at New York Law School and the single mother of a 13-year-old daughter she had adopted in infancy. They exchanged rings and found an apartment on Manhattan's Upper West Side. Then, as she was en route to work on June 12, Aronson's cell phone rang: A child was waiting in Hanoi.

"I cried," she recalls. "I couldn't believe I was really going to have a little boy." She and Leo flew to Vietnam that August. Like so many adopted orphans, 4-month-old Ben was overwhelmed by the attention and withdrew. "He couldn't make eye contact," says Leo. After a few months, however, he began to show affection. Ben calls Leo "Mommy" and Aronson "Mama." The women split parental duties. Around 6 a.m. "Diana gives him his bottle, changes his diaper and plays with him," says Aronson, who then makes breakfast and plays with Ben some more. Now, she speaks from experience when counseling prospective parents.

"You're going to be extremely tired - it's hard work taking care of a baby," Aronson warns a couple preparing to fetch their new son from Moscow. "Share the burden. Don't be a martyr." Later she reflects on her clientele. "Most of them are very nice people who want what everyone wants -- the American dream, a kid who will have a happy life," Aronson says. "But some are in what I would call a Bloomingdale's frame of mind. They ask, 'Where can I get the best kid? What's the best orphanage?' I tell them there is no best orphanage. You can find lovely babies everywhere in the world - lovely delicious children in the midst of chaos."