Intestinal Parasites in the Institutionalized Child 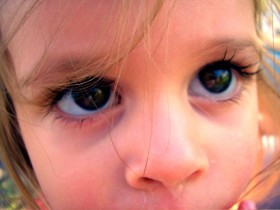 Adopted kids know they're different.  Remember when being different at school was the worst possible thing that could happen?  In a study of second-grade children who were told that one of their classmates was adopted, the most common response was, "I'm sorry."

They're not only different, they've already faced one of the hardest lessons life has to teach.  They have lost their birth parents and will have to confront the reality that painful, sad things can happen to them.  For most of us who are not adopted, having a parent die or losing a parent through divorce may be the biggest loss we'll ever know.  Our parent is gone and we're on our own, without protection, guidance and unconditional love.  There is a huge hole in our lives.  When this loss occurs in adulthood, we know it's not our fault - we're not all-powerful and we didn't do anything to cause it.  Adopted children, however, experience this loss from a child's perspective - they do think they're omnipotent and, therefore they must have done something to cause what happened.

From time to time, adopted children really wish their lives had turned out differently.  And that's a normal part of their developmental process.  They know they can't change their pasts.  They tell me, "I was helpless - I couldn't keep her with me" - "her" being the birth mother.  They think, "I should have been able to change things and she would still be with me."  They feel a part of them is missing and it's somehow their fault.

We don't talk enough about the things that hurt in adoption.  So when adopted children say, "I miss my birth mother," adults try to "fix" their pain with consoling words like "Mommy and daddy wanted you so much to be in their family."  But to adopted children, it sounds as though adults don't listen when they try to communicate their grief and their loss.  And even when adults do listen well, adopted children can't be fully comforted because they don't yet fully understand their own feelings.  So anger and frustration, or sadness and anxiety result.  Though these are normal responses for children, they can become a problem when they affect their emotional growth and development ... and when they negatively affect their relationships and self-esteem.  Other kids may not want to spend time with these children.  Parents and siblings may have trouble falling in love and staying in love with some adopted children because of the behaviors those feelings cause.

Loss is at the core of adoption.  Adopted children in early childhood hear about adoption as the "chosen baby" story: "We tried to have a baby but we couldn't, so we went to an agency and a really nice lady helped us adopt you."  It sounds wonderful then.  But by the time they get to grade school, they've become more analytical about their world.  That's when other kids ask, "Where is your real mom?  Why didn't your real mom keep you?"  Adopted children may feel rejected and depressed, or have temper tantrums.  For them, anger is often better than feeling overwhelmed and helpless, especially in front of their friends and classmates.

Signs of anxiety also show up because adopted children know too well about what I call "a cosmic hole in the universe," and what author Harold Kushner calls "when bad things happen to good people."  Grownups come to this knowledge when something devastating happens in their adult lives.  But adopted children are old souls who have already experienced one of life's greatest losses, who already know that bad things can happen to good people.  They have good reason to doubt adults' reassurances of safety, so their anxiety shows up in a myriad of ways.  Adults can't love them out of this, but they can say, "I think I understand what you're feeling ... at least a little bit.  Let me tell you about the time I worried about such and such."

The approach of caring adults should be to validate an adopted child's experience by talking about it - first, name the feeling that's going on -  anger, depression, anxiety - then check it out with the child.  Together, you can find ways to cope.  Adopted children aren't crazy or unloving if they feel sad or angry or fearful - let them know that.  No one can make these children's losses smaller by suppressing them - caring adults can, however, help them to make the rest of their lives bigger.

Above all, give adopted kids a break - they're doing the best they can.  With caring adults who can simply listen and understand, adopted children will learn to accept and move beyond their losses.  Teach adopted children to step back, take a deep breath, and remind themselves of how far they've come.

Biography:   Dee A. Paddock is a psychotherapist and speaker who specializes in issues of: