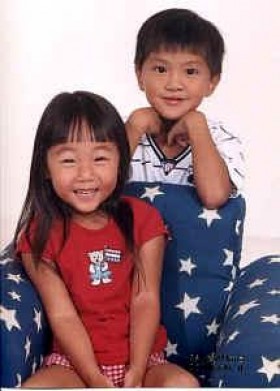 Gods Gifts thru My Eyes

As I sit in moms group like many times before, we began talking about scripture and being a mother with children when suddenly I feel as though I am an imposter in my chair forgetting how to breathe. Those feelings of Gods curse from so many years ago that disappeared when my adopted son was placed in my arms comes rushing back.  In the presence of so many wonderful mothers, did I deserve to be sitting with them?  I could not speak or the tears would flow, but running out of the room would be so dramatic, and then a gentle touch on my back from a friend next to me... It reminded me to take a breath and that I was ok.  At that moment, I thought about what Gods gifts have meant to me as a mother but others may not be able to see.

I have wanted to be a mother since I was a young child probably the only young girl that would shop the clearance racks for baby things for my “hope chest”.   When my husband and I got together at a very young age, I knew we would get married and have a family and I had our future all planned right in front of me.  When I did not get pregnant the pain and sadness was unbearable.  Why would God make me want to be a mother so badly and then curse me with infertility?  Why when I closed my eyes, the image of our children looks so different from us?   Why did my heart feel so strongly about adopting?  Well those questions were answered and so many others after wondering for eleven years.  I discovered Gods plan for our lives was not a curse but an incredible gift of love and patience so much greater than I could have ever imagined.

My journey to motherhood was not an easy one, but finally after many disappointments, the time was right and the money was available so we applied to adopt a baby girl from China.  We wanted a girl and there are so many available in that country.  We had decorated the nursery in beautiful pink flowers, stripes and bears and bunnies.  We had Chosen her name.  One night I had a vivid dream of holding a little boy his face was that face I had always had in my mind of my son.  The next day we joked about it saying we would probably adopt a girl and get pregnant with a boy soon after.  That evening we got the call from our social worker and China had matched us with our baby but there was a problem she said, “It’s a boy”  99% of Chinese adoptions are girls.  As my legs gave out and I burst into tears Keith ran over to me, and the shock of the news affected him the same way.  We quickly looked at each other and realized we were parents and that was all that mattered.  When we received the pictures the following day I could not believe it, his face was that boy in my mind for so many years.  I recognized him... God had planted him in my heart so many years ago and again a few nights before in my dream.  It all made perfect sense as if all the pieces of the puzzle were finally together Gods plan for this very special boy was incredible.  My “labor” began as we stepped on that airplane and started our three-week incredible journey.  When we returned home, we had been on nine different airplanes flying a total of 40 hours, a 3-hour train ride and a few hours riding in buses and cars but we were now a family.  Two years later as I was looking on the internet at the many children needing families, I saw a beautiful baby girl that also looked just like the image in my mind of our daughter.  Soon our adopted daughter was coming home from Korea.  Even though it has not always been easy emotionally, financially, and some days have had more challenges than others have I thank God for such precious gifts and the wonderful way he made us a family… I would not change a single thing.  My husband often tells me there is not a single person in the whole world that could have loved these two children as much.  I do not know how it feels to carry a child for nine months like so many women do, but I do know how it feels to be a mother and to love so unconditionally these two very special gifts from God.

When I put my children to bed, I have a rhyme that I say to them.