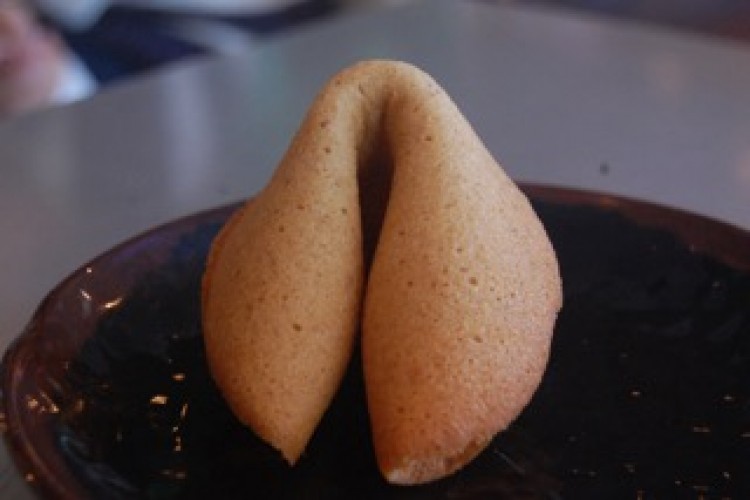 The next time you crack open a fortune cookie, pay careful attention to the message inside. It might just change your life.

At least it did for adoptive mom Peggy.

Last May Peggy topped off a carry-out Chinese dinner with a cookie and read her fortune aloud to her family, "You are going on a long trip to China."

"My first reaction was, 'What a stupid fortune - there aren't even any lottery numbers on the back,'" she recalled. "Then my husband and older daughter started to laugh."

Truth is, Peggy's husband and daughter had carefully removed the cookie's original fortune with a pair of tweezers and replaced it with one they had printed out on a computer. It was their way of telling Peggy that she had won a door prize at the Missouri Botanical Garden's Chinese Culture Days festival - a round-trip ticket to China.

When Peggy won the trip, she was the mother of two daughters - Kirsten and Lily, 9. They had adopted Lily from China as a 3-year-old. Today, Peggy is the mother of two sons as well - Alex, 9, and Michael, 7 - brothers who had lived in an orphanage in Chuzhou, in the province of Anhui, near Nanjing, since 1997.

They had often talked about the possibility of adopting a second Chinese child. But when Peggy called a friend at Children's Hope International to share the news about the trip, she was stunned to find out that the locally based adoption agency had donated the airfare.

"Maybe it was just coincidental, but I really felt that God had something in mind for us," Peggy said.

After a family discussion, she turned in an application to begin another adoption the next day. "We were hoping to find a girl between the ages of 8 and 14. We thought that would be a good fit with our family."

Three weeks later, she was at Children's Hope International's office paging through the monthly newsletter when she stopped at a page called "Waiting Children's File," which features hard-to-place kids.

"I saw a picture of two little brothers who were trying to find a home. And something just grabbed my heart."

Maybe it was the fuzzy photo of two black-haired boys in winter jackets, huddled close to each other. Or maybe it was the brief text underneath, which read in part: "Fu Huang Dong is lovely and warm-hearted. He is independent and is in grade 3. He received three 'good student' awards in 1999. Fu Huang Chun is a sensible, independent little boy. He likes to draw, and he is meticulous with his homework. He has received 'integrity and ability' awards at his school."

In any case, Peggy went home that afternoon and asked her family what they thought of adopting the pair instead. Kirsten, who had always wanted an older sister, thought two little brothers would be "just as good." Lily quickly decided that they would make for a well-balanced family: "Three boys, three girls, three Chinese, three American." But her husband's initial reaction was one of disbelief.

"I remember saying, 'Two? Two boys?' I guess I was thinking about college tuitions, plus, I'd been used to living in a house where people made snide remarks like 'Girls rule, boys drool.'"

Within a week, however, the family had come to a consensus. And after more than six months of paperwork, they flew to China in January to adopt the boys.

"My free ticket wound up costing us $40,000," Peggy said. "But when we found out that the boys were from the same area of China where Lily had lived, we decided the girls had to come as well. We even took Lily back to visit her teachers and caretakers at Hefei."

At the orphanage, Alex refused to be listed for adoption; he waited more than three years for his mother to return. When a couple expressed strong interest in adopting Michael, however, he finally consented to search for a new family - provided he and his brother could remain together.

Since their return to St. Louis life has been smooth, for the most part, although there have certainly been some adjustments.

The boys, who knew no English, are in second and third grades at Fairmount Elementary School in the Francis Howell School District, which Lily also attends. They excel in math and are catching up in reading, with the help of English as a Second Language teachers. Their spoken language is growing to include short sentences ("Mommy, I'm hot," "Can I watch TV?").

After an initial abhorrence to American food, they are developing a taste for chicken nuggets, meat loaf and mashed potatoes and pancakes with hot sauce. ("They like everything spicy," Peggy said.) They've chosen bedspreads for the room they share - Alex's is sports-themed, Michael's is festooned with NASCAR race crews. And they are getting used to being part of a family again.

Peggy's family is adjusting to life as a bigger family. Kirsten helps Michael with his homework; Lily, who is diminutive, is coping with hip-checks and sibling teasing from her brothers. As for Gary? "Boys are different, that's for sure-much louder and more boisterous. And there are Legos everywhere," he said with a laugh.