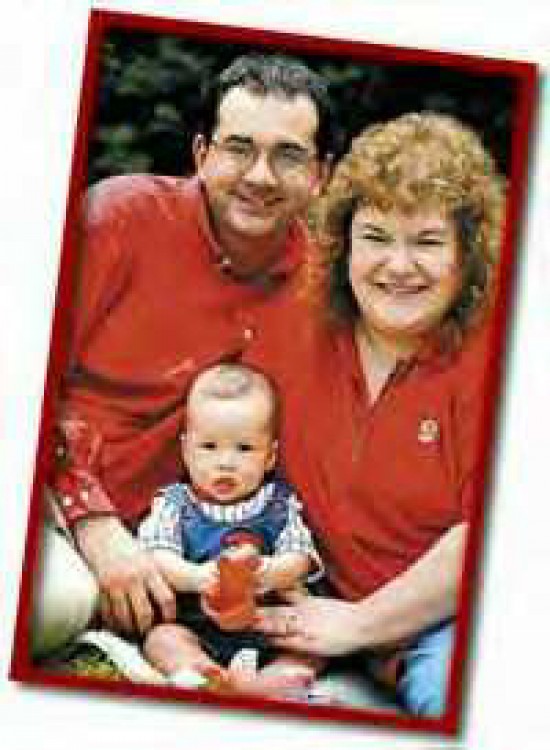 The ringing phone ripped through Wendy Cummings' silent bliss. It was hard not to get excited when she heard the nurse's voice on the other end.

She promised Mike, her husband, that she would wait until the doctor confirmed their pregnancy before she began planning their new role as parents. After all, the frozen egg fertilization procedure used to help the couple conceive a child was experimental and the odds of getting pregnant from it were slim. Still, it was an impossible promise to keep. She was excited.

They had waited so long for a child. Since the Scranton couple learned that Wendy had polycystic ovarian syndrome, they had been to so many doctors, through so many tests, so many infertility treatments over the past five years. And now, a little more than a week after Christmas 1999 and Wendy's 33rd birthday, she was about to find out if the two embryos implanted in her uterus were twins growing inside her.

"I'm sorry, Mrs. Cummings," the voice on the phone said quietly. "You're not pregnant." It would be almost another year before the couple received the same shattering news after their second attempt with frozen egg fertilization. This time, the nurse, too, was crying as she told the couple they had lost a second set of twins. "But things looked more hopeful this second time," cried Wendy. "I felt queasy in the mornings. Maybe it was just my mind making me think I had all the symptoms of being pregnant. I would rub my stomach and sing 'You are my sunshine' to them."

Wendy had told her math students at Old Forge Junior-Senior High School about the couple's second attempt with frozen egg fertilization. She had little choice but to share what they were going through. Her students suspected she was dying of cancer because of her many doctor appointments and emotional turmoil. "I didn't want them to worry like that and I couldn't lie to them," Wendy says. Her students had fast become like family. They grieved with her when she told them that the couple lost their second set of twins. Weeks later, their flowers and condolence cards would still come.

Mike had told some co-workers at the Lackawanna County Stadium where he worked as the director of public relations for the Scranton/Wilkes-Barre Red Barons. They also mourned for the couple's loss. Both their families -- Mike's parents, Dorothy and James Cummings, and Wendy's parents, Sylvia and Leonard Zubrickas -- did their best to console. "You can't describe the heartbreak you feel as a parent when you see your kids go through this kind of hurt," says Mrs. Cummings. "They're both good kids."

The loss grew harder for Wendy to accept. "I would come home and she would be bawling hysterically," says Mike. "I couldn't console her. I didn't know the right things to say." The couple would turn down invitations to baby showers and avoid walking near the baby aisles in stores. "It was too painful," Wendy says. "I couldn't look at the baby stuff."

They talked about their options. Despite the heartbreaks and pain, they were not about to give up their dream to have a family. Wendy's doctors believed the couple could still conceive a child if she had surgery to dislodge her left ovary. Then try in vitro fertilization. The ovary was stuck behind her uterus, making in vitro fertilization too risky. "I just can't do it right now," Wendy decided, "not after the last loss."

Then there was adoption. "I always thought I couldn't adopt," says Wendy. "I wanted to know what it was like to be pregnant. I wanted to experience everything a pregnant woman experiences. I didn't want to be shortchanged." But something clicked.

"I want to be a mom," she says. "Being a mom is much more than just being pregnant." The couple researched different types of adoptions -- private, agency, domestic, international. They decided a private domestic adoption would be best for them. Wendy wanted the baby to be as young as possible.

Often adoption agencies will place the baby in foster care and make the adopted parents wait several months before getting the infant. The infants up for adoption internationally are often eight months to several years old. "Bonding is very important to me," Wendy says. "I don't want to miss out on the mother-child bonding." Private adoptions are also quicker and cheaper, adds Mike. The couple had already spent more than $18,000 on infertility medications and surgeries. They expected an adoption to cost about $10,000 to $15,000. If needed, they were prepared to mortgage their home to finish their dream.

On Oct. 9, 2000, they met with Barbara Casey, an adoption attorney in Reading. She explained how adoption laws vary state by state. In Pennsylvania, the birth parents cannot give consent for the adoption until 72 hours after the child's birth, she told the couple. In some other states, consent can be given immediately after birth. The laws also vary in the types of expenses adopted parents can pay the birth parents, she said. In Pennsylvania, those costs include medical and hospital expenses, as well as adjustment counseling. Other states allow adopted parents to pay for necessities the birth mother has as a result of her pregnancy -- which can make the adoption more costly. For her $1,500 fee plus advertising expenses, Mrs. Casey would place ads in a national newspaper and freebie papers in states with adoption-friendly laws. Once the couple found a birth mother, they would give her a $5,000 retainer to handle the legal side of the adoption. She warned them that a private adoption can take six months to two years. Wendy and Mike prayed theirs would not take long.

Over the next few months, the couple had filled out the lawyer's adoption applications and put together a collection of required paperwork. It included financial records, medical records, reference letters from friends and employers, a home study by a social worker, their birth certificates and marriage license, criminal record check forms and a Pennsylvania Child Abuse History Clearance. They also put together a profile about themselves to be mailed to birth mothers interested in adoption. Mrs. Casey suggested the Cummings network to get the word out that they were looking to adopt. Put a note in with your bills, put posters up on bulletin boards at the supermarket, make a Web site, she told the couple. "Networking is very important," says Wendy. "You never know who might know someone with a baby to give away.

We made a Web site and registered it in all the search engines." The Web site told of the couple's struggle to conceive a child and of their dream now to adopt one. There were photographs of them, their families, their Scranton home and their husky-lab, Molly. It also included their toll-free number and e-mail address -- both set up specifically for birth mothers to contact them. Responses started to come in from the ads placed in newspapers by their adoption attorney. She sent them e-mails with descriptions of the birth mothers and children up for adoption. "Jennifer -- full Caucasian -- due in February. She is in Alabama. She will need living expenses. Birth father will cooperate." "Biracial boy due January in Houston, TX...Needs approx $850 per month living expenses, Medicaid eligible..."

Other e-mails told of young girls raped by relatives and now pregnant, birth mothers with histories of hereditary diseases and pregnant women with HIV-infected or alcohol-addicted babies. Because of Scranton's homogenous racial makeup -- 93.6 percent Caucasian, according to the 2000 census -- the couple had decided to search for a Caucasian baby. They also wanted a healthy one.

"We just don't think it would be fair to raise a black or biracial baby here," Mike says. "The kid would have a hard time growing up here. As unfortunate as it is, that's how it is here." For those leads that did seem ideal to the couple, they mailed off their profile in eager anticipation that this could be the one. More often than not, they would never hear back from the birth mother. Later, they learned their attorney e-mailed the same leads to all her clients.

Reprinted with permission of the family.