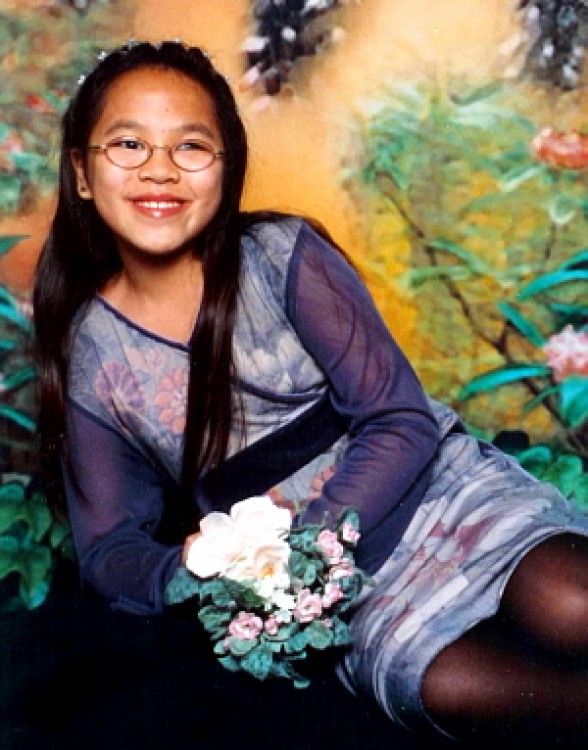 My daughter Esther got in her ready stance, eyed the board with the scary face drawn on it, and placed a final kick to the inked in nose. The board broke with a loud snap and I watched with pride and tears in my eyes as she bowed to her karate instructor. Breaking one’s first board in karate is an exciting accomplishment for anyone, but Esther’s first board broken carries extra meaning to me………….

We recently celebrated both Esther’s ninth anniversary as part of our family, and her eleventh birthday. Esther joined our family in 1994 at the age of two, from Nanning, Guangxi Province, China. She was scared and angry; a two year old whose whole world had been turned upside down. It took many months for Esther to begin to let her guard down with me and over a year for her to begin to feel comfortable with my husband.

The first few years were filled with both progress and set backs as we worked to facilitate a secure attachment, alleviate her major abandonment fears, and catch her up developmentally. Those years were also filled with a lot of laughs and a lot of tears. Feisty, yet insecure, Esther struggled to trust us, and yet was obviously not quite sure she wanted to.

When Esther had been home about three years, she began to verbalize many of her feelings and fears. It was heartbreaking, even as it was enlightening, to hear her wonder aloud about her birthmom, question whether I would ever leave her too, and literally become hysterical at anything and everything Chinese that crossed her path or was spoken about. After one particularly emotional day, as she had sobbed in my arms for hours after talking about how she felt about being adopted, about being in an orphanage in China and about all the issues that go with both, she clung to my neck with ferocity. She wanted to know, with all certainty, that I would never leave her. Hours of holding her, crying with her, and reassuring her that I was her forever mommy and that I would never leave her had done little to calm her troubled heart.

Later that night, I took a different approach. "Esther," I asked her, "do you know what trust is?" She shook her head no. "Trust is giving someone your heart to hold, and believing they will never do anything on purpose to hurt it," I explained. I went on to tell her that it was not an easy thing to do, this giving of one’s heart, but that if she would let me hold her heart, I would never do anything on purpose to hurt it….indeed, I would cherish it, protect it, and fill it up to overflowing with love. I hugged her tight and asked her if she was ready to trust me. Again, she shook her head no. "That’s ok," I told her. "Sometimes it is easier to trust if another trusts you first. I trust you Esther. I trust you with my heart." I put my hands over my heart, and made the motions of placing my heart in her chest. "Maybe someday you will be ready to trust me with your heart too," I finished, as I tucked her into bed.

Over the next couple of years, Esther continued to work through much of her confusion and fears, yet we knew she was still holding us at arm’s length. She blossomed in many ways, and yet clung to me in every situation, as if to do so would ensure that I would not abandon her. I continued to talk to her about her fears, assuring her in every way I knew how that she could trust me because I was her forever mommy.

One night, a couple of years after I ‘gave’ her my heart, Esther was waiting for me to tuck her in. Sitting up in bed, she said, "Mommy, I have something to give you." I sat down next to her, wondering what she might have for me since it wasn’t Christmas or my birthday. Looking up at me with her beautiful eyes and a timid smile, she placed her hands over her heart, and made the motions of placing her heart in my chest. "Oh Esther," I said, the tears flowing down my face, "this is the most precious gift anyone has ever given me!" Smiling widely now, even as her tears began too, she softly said, "I trust you Mommy."

While it has not all been smooth sailing since that memorable day (after all, adoption is a life-long process!), the ground we gained after Esther chose to trust has been nothing short of amazing. She began to blossom as never before, taking on new challenges and growing in self-esteem and confidence. She smiles easily, laughs delightedly and makes friends wherever she goes. Esther is no longer a frightened toddler who cannot trust, but a beautiful young lady, standing tall and powerful……….

The broken board, glued into a plaque and boasting the date it was broken by a right side kick, represents to Esther an accomplishment in karate; to have symbolically broken through the armor of the enemy. But THIS broken board has extra meaning to this forever mommy…….it is an accomplishment in trust; symbolically representing a break in the armor of the heart of one little girl….a little girl who has given me her heart to hold.

Copyright Patty McLaughlin, 2003. Patty McLaughlin is an Adoption Parenting Educator with Adoption Partners, and the author of Different But Equal, an adoption parenting manual. Patty and her husband Mike live with their four children in Largo, FL, where their oldest is in college and they home school their 3 younger children. Patty can be reached at songen@att.net or adoptionpartners@att.net .