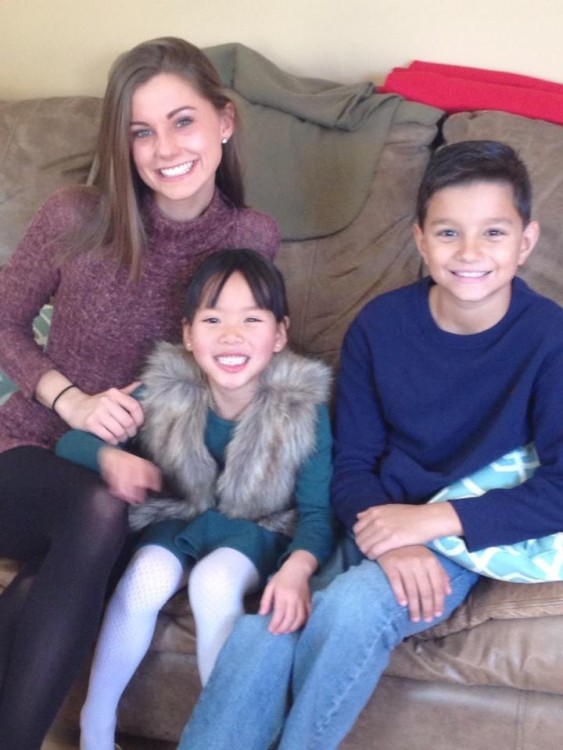 I’m a person who avoids using the word “never”. To my middle-aged ears, it just sounds so harsh, so finite. Perhaps this wasn’t always the case. But I have now lived long enough to know that uttering the phrase “I will never…” throws a big fat dare into the universe, and tempts fate to prove you wrong. In fact, it’s practically like predicting exactly what will happen. Consider for a moment these famous last words:

I will never own a knock-off designer bag.

I will never work at a job for more than 2 years.

The fact is, I’m a 50-something year-old woman with more than one knock-off designer bag. I’m also proud to say that I’ve been at the same job for 23 years and counting. And if you ever catch me up at 3:00 am, it’s because I’ve been roused by my 16 year-old dog, Shamrock walking around the house shaking her two-pound collar of bling. I learned the “never say never” rule at 47 years of age, when I met the love of my life and got married for the first time, after years of believing in “never”. I also learned there would be more “nevers” to come: becoming a step parent was one of them; becoming an adoptive parent was another.

There are minimum age laws for many milestones in life: entering school, getting working papers, applying for a drivers permit & license, registering to vote, buying alcohol, and retiring & collecting social security. I’m sure a lot of thought and research went into these age restrictions and we collectively agree they make sense.

What no one says out loud, is there is also the unwritten law of “you’re too old”. I’m not talking about taking car keys away from a 100 year-old with limited eye sight. What I’m referring to is the perception by some that at a certain age, you simply are too old to become a parent.

Perhaps this perception is fed by our collective fears of aging. We worry that older parents won’t have the energy of those younger than them, or that older parents may not be around for important milestones in their children’s lives. Whatever the reason, becoming a first-time parent past the age of 40 is not exactly encouraged.

To be clear, the rules around becoming a step-parent are different. No one batted an eye when I married and instantly became a step-mom to my husband’s 13 year old daughter Deirdre. That made perfect sense to people. What raised eyebrows was when I announced to family, friends, and co-workers that we were in the process of adopting my would-be son Jesse, then a two year-old from Russia through Wide Horizons for Children (WHFC), an international child welfare and adoption agency. Perhaps naively, I expected to hear “congratulations!” After all, isn’t “congratulations!” what you’re supposed to say to all expectant parents?

To be fair, I did get genuine well-wishes from many with whom we shared our news. But after the shock and elation wore off a few days later, there were many questions, each of them laced with a fair amount of commentary: Did I realize how old I would be when this child turned 18? What if there are undisclosed medical issues that you don’t learn about until you get home from Russia? How are you going to keep up with the energy of a toddler? Didn’t I hear the horror story on the news about so and so? The list of “what ifs”, “did you knows”, and “I heards” went on and on.

Rationally, I knew these people likely meant well. I told myself they just wanted the best for us. Perhaps they looked down the road of international adoption at an uncertain outcome, and feared for our long-term happiness. Perhaps they simply wanted to give sound advice. But this naysaying by those closest to me felt like an egregious overreach.

I wanted to tell them all, quite defiantly, “Of course we considered these issues -- and many, many others as well!” But I held back. I knew I could not let myself be influenced by these voices of fear and with each question, I strengthened my resolve. Adopting a child, this child, was what we were being called to do.

What If We Didn’t?

For us, it wasn’t the “what if we did” that gave us pause, it was the “what if we didn’t”? What if we didn’t become parents to this sweet little boy? What if we just walked away, because of some collective prejudice that said that our biological age would preclude our son from growing up in a loving and supportive family? Was he now doomed to growing up in a Russian orphanage simply because no one could look beyond their ageist preconceptions? The sad prospect of that thought made our decision to adopt him crystal clear. Our message to others quickly became: “this is happening -- get on board!” Luckily for us, they did, and since then, the train hasn’t stopped moving forward.

I now know after speaking with many adoptive parents, that our story is not unique in this respect. I have read many adoption stories where strong opinions regarding an adoption had caused strife, even rifts within families.   Then, when the children finally came home, destiny intervened; everyone fell in line and fell in love. Luckily, this is how it happened for us. Our friends and family were very supportive from day one. Two year-old Jesse quickly became the center of our universe, and theirs! The happy ending we had wished and prayed for, we wrote for ourselves.

Like any good story with a happy ending, I felt this one needed a sequel. So two years later at Jesse’s second homecoming celebration, I dared to broach the subject once again. But this time, I dove head-long into the controversy.

“I’m thinking about adding a little girl to our family,” I said to my husband, rather matter-of-factly, as if the decision had already been made. To my mind, it had. My husband immediately dug down into his big bag of fear, tossing out his worries for the future. “We are older now. We won’t have the energy. What if our son doesn’t get along with a new child and it ruins our new normal?” I understood where his fears were coming from – but I could not give in to them. I decided to fight dirty.

Naturally, I appealed to his youthful spirit, energetic personality, and his male sense of pride. I also made sure to reference his absolute musical passion: as a 50-something part-time musician, my husband has had a decades-long love affair with the Rolling Stones. I did not miss the opportunity to point out that Keith Richards, while rather long-in-the-tooth, also had young children. What’s more, Mick Jagger had his eighth child at 72. From the looks of things, having a family late in life hadn’t slowed them down a bit. Surely, he was made of the same Rock & Roll grit. Our life, while hectic and sometimes complicated, paled in comparison to the lives of international rock stars.

Because my husband is such a rock-star spouse, he agreed to consider it. We talked about the decision at length and once again, the “what if we didn’t do this” argument won out. But there were complications. Russia had recently barred Americans from adopting Russian children due a diplomatic dispute, so we had to explore other options. We consulted with representatives at WHFC, and before you could say “dossier”, we were off again, this time to China to bring home our 3 year old daughter Mia. After a fair amount of upheaval and transition, we once again settled into our new normal.

The years are flying by and my babies are babies no more. Jesse is now 10 years old and Mia has just turned eight. My step-daughter Deirdre is 22. My husband and I are also older, but given my penchant for “spin”, I like to think of it as more seasoned and wiser. Like any blended family, we’ve had our shares of ups and downs, highs and lows, and difficult transitions. But we worked through them, and I’m confident we will work through more in the future. Whatever comes our way, we know we can handle it. We wouldn’t change a thing: we’re happy, healthy and still going strong.

I’m delighted to say that after all this time, I remain an avid adoption devotee; I am still active on many adoption related Facebook pages, I follow many adoption blogs, and when WHFC asked if I’d be interested in joining their new adoption advocacy initiative, I jumped at the chance. Admittedly, this new opportunity makes my husband a wee bit nervous – he’s happy with our new normal. But he knows my passion and shares it in his own quiet, supportive way. He understands that there are still children growing up in orphanages who need to find loving homes of their own. I feel called to help these children and other families like us discover their new normal.

If you read my story and saw even a glimpse of your own life in mine, then you might consider exploring the idea of adoption. No doubt, as you do, you’ll have questions along the way. Thankfully, the internet is a great tool to educate yourself on the many options, and the many children who are available both domestically and internationally. There are also groups that can help adoptive parents with fundraising, subsidies and grants to help defray the financial burden.

My best advice to would-be adoptive parents is to never say never! Chase your elusive dreams; resist the naysayers and quell the fears; keep an open mind and an open heart; reflect thoughtfully; explore thoroughly; and above all, stop asking yourself the all-too easy questions like “am I too old?” and “what if I do?” At the end of the day, the decision to adopt is about a child. Potentially YOUR child. The most important question you should be asking is “what if I don’t?”

How Can You Afford Adoption?