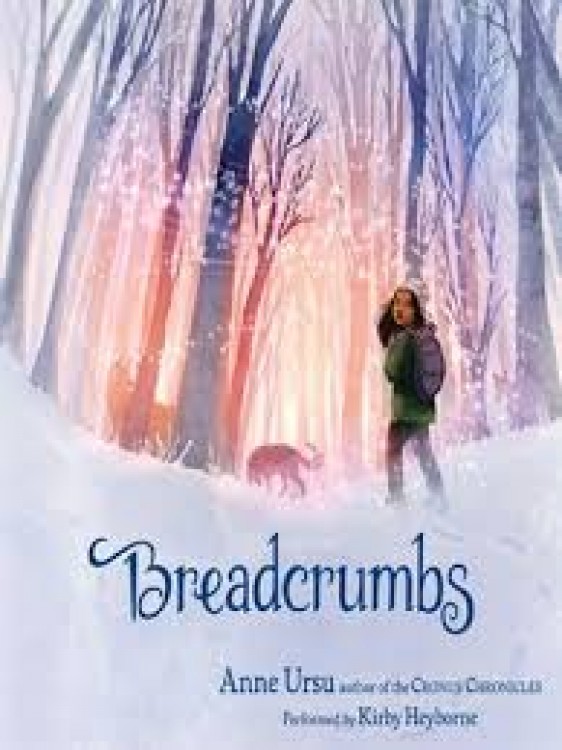 So wouldn't it be great if you could hand your child a thrilling, well-crafted, engrossing novel in which neither race nor adoption were the driving force behind the plot?

If you'd like to do just that, Anne Ursu's Breadcrumbs is a must-have. I was excited to read this one not only because the main character, Hazel, is part of a multiracial family formed by adoption, but also because I've read and loved Ursu's adult novels Spilling Clarence and The Disapparation of James. Both were favorite handsells back in my retail days, for the clever mixing of intriguing characters and fantastical turns of everyday reality.

And Ursu didn't disappoint me in Breadcrumbs, which I think is a strong contender for the Newbery this year (please please please). In the book, Hazel and Jack are two peas in a pod, sharing everything from a love of fantasy to a talent at superhero baseball (a game of their own invention). But one day Jack just -- goes away. Oh, he's there in body, all right, but he's no more Hazel's best friend than a stranger on the street. Jack just looks right through Hazel like he doesn't even see her. Hazel's crushed, and she can't accept what her mother tells her, that "these things happen". And when Jack disappears for real, Hazel doesn't believe for one second that he's with his elderly Aunt Bernice. No, Hazel's going to get to the bottom of this -- and for that, she must set off into the frigid Minnesota woods to rescue her very best friend.

Now, I could go on and on about all the things there are to love about Breadcrumbs, from the way Ursu interweaves fantasy into common events and how she turns fairytale conventions upside down, while never betraying their essence. Particularly well-done are the scenes once Hazel enters the woods, so evocative that I was amazed to look up from reading them and find myself at home tucked up in bed. But what many readers will take away from Breadcrumbs is the sense of holding fast to your sense of self and letting that be your compass. Hazel never wavers from the notion that Jack, the real Jack is still in there, and that he needs her now even more than he ever has. Quite a commentary on growing up but not away, this one.

Breadcrumbs is that rare thing, a novel that's not genre- (or gender) defined, neither wholly fictive nor entirely true. Honestly, I can't say enough about this smart, funny, surprising novel, which I found so compelling that I truly regretted turning the last page. For kids who feel on the outside, either because of something like adoption, or because they're finding their way across that looming chasm between childhood and growing up, Breadcrumbs will be a great gift. And if you feel that way as an adult? Guess what -- it'll speak to you too.

Breadcrumbs by Anne Ursu, published by HarperCollins
Ages 10-13
Source: Library
Sample Quote: "Hazel blinked. It occurred to her that Mikaela was being nice to her. She did not know how to react, for when your heart has been poisoned and someone picks a dandelion for you -- because it is bright and yellow and you seem like you could use something like that -- all you can do is contemplate the funny ways of weeds."
Highly recommended