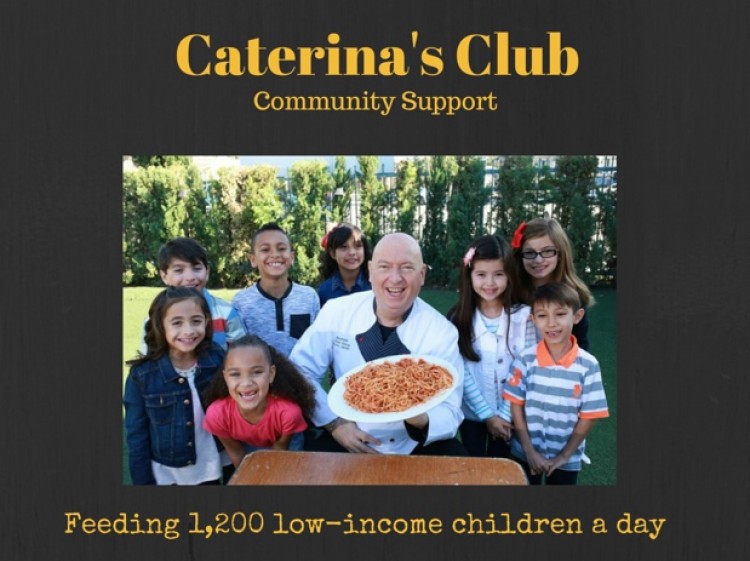 Not far from Disneyland, a small gathering of children eagerly await for their van to pull into the motel parking lot. They have waited for this moment all day. Within minutes the van doors open and they eagerly hop in, joining a dozen other young passengers. It exits the parking lot and drives away from the lights and pageantry of the Happiest Place on Earth and toward, in their lives, the most significant place on earth, The Boys and Girls Club of Anaheim, one of several locations where Caterina's Club has served over 750,000 spaghetti dinners every single night for over eight years to the motel children of the area. The epidemic of childhood hunger in America is real. It is estimated that 16 million children in our country live in households that cannot provide three well rounded meals a day. That factors out to about one in five kids who miss one, two, and sometimes even three healthy meals a day. The effects of this childhood hunger epidemic is staggering. Beyond the obvious of an empty stomach the lack of balanced solid meals also wreaks havoc on a child’s brain development.

But now, thanks to one organization, children living in the motels in Southern California are able to know at least one of their basic needs for survival is being taken care of by someone else. On average Caterina’s Club feeds 1,200 motel children every night.

Chef Bruno Serato, Executive Chef and owner of the White House restaurant became aware of the plight of the motel kids several years ago when his mother Caterina was visiting from Italy and together they had an encounter with a 7-year old boy at a Boys and Girls Club who told them he wouldn’t be eating dinner because his family couldn’t afford to. At his mothers urging, Serato prepared the boy a plate of pasta. That one plate was the first of hundreds of thousands of plates of pasta served to children in desperate need of a healthy meal throughout the area.

Kaylee Duff, Assistant Executive Director of Caterina’s Club, defines a motel child, “A motel child is a child who is residing in a motel, meaning his or her family has been forced to live day to day paying rent on a nightly basis. Often times, the motel monthly adds up to being the same if not more than an average apartment rent. What is keeping these families motel stricken is their inability to save the large sum required for the deposit on an apartment or bad credit. Motel children continue to attend school struggling to live a normal life in the tight quarters.”

The length of stays range from family to family according to Duff, “I have been in contact with families who have lived in motels for over 12 years, 2 years, 3 months, 3 weeks. It is a situational basis. The families who do leave are usually leaving to a shelter, the streets, a family member’s place, or to an apartment. It is a big undertaking making 1,200 spaghetti dinners every day. For this to happen Caterina’s Club is made up of a combination of volunteers and staff members. Two chefs and two kitchen aids are on hand starting at 8:00 in the morning and by 3:00 in the afternoon the sauce is simmering, the noodles are cooked and hundreds of trays of individual spaghetti dinners are prepared for each of the 19 locations in 6 cities throughout Southern California. Staff members from each location arrive between 3:30 and 4:30 to pick up the warm trays for delivery to their designated location and by 5:00 most of the children are eating, filling their stomachs with a healthy warm meal.

Most of the pasta and sauce is donated from local companies, individuals, restaurant guests and large companies like Barilla.

The hunger crisis among motel children is not just a Southern California thing. “From what I have seen and heard the majority of cities across the nation have this problem. Brownsville Texas, Brooklyn, Chicago, Miami, and Salt Lake are just some cities where I have been in direct contact with someone in the same situation. The plight of motel living is pretty much prevalent wherever there is a motel,” Duff said.

With such widespread need for feeding children, Serato and Duff were asked what advice they would give to someone who may want to start something like this in their own community.

Finding the children in need is of course the first priority. “If there is not a local after school program, perhaps reach out to a local motel, many times motels will have programs or church services you can reach out to, to offer the meal program. Bruno’s mentality is to start with one day a week if necessary, but to get a system in place that allows you to provide the meals nightly, because he does not eat just once a week, and neither do you,” Duff stated.

Serato added, “Name it after your mamma, or someone who inspires you to give.” Duff continued, “Find a restaurant or restaurateur who is in the area that might be interested in the mission. Finding a kitchen with the space and time willing to donate their services is instrumental in running this program. Once you have a kitchen on board, you reach out to the community to collect donations of the food.”

Starting an organization like this is not easy. It requires a lot of legwork and time but in the end the hours of preparation and labor are worth it knowing a child is going to bed fed.

When asked what has frustrated him the most since the beginning, Serato replied, “When people who can help others do not. What is more, is when someone offers to help or reaches out to help but does not follow through with it. Too much talking and not enough executing.”

At the end of the day however, Serato’s rewards far outweigh his frustrations, “What motivates me is keeping the legacy of my mother and her giving heart alive.”

If you are inspired to start your own Caterina’s Club in your area please contact Executive Director Kaylee Duff.  Also, look for the release of Chef Bruno Serato’s new book Feeding the Kids in America this spring. To make a donation, organize a pasta drive or volunteer at one of their many locations in Southern California visit their website and/or Facebook page for more information.

What is a Primary Provider in International Adoption?