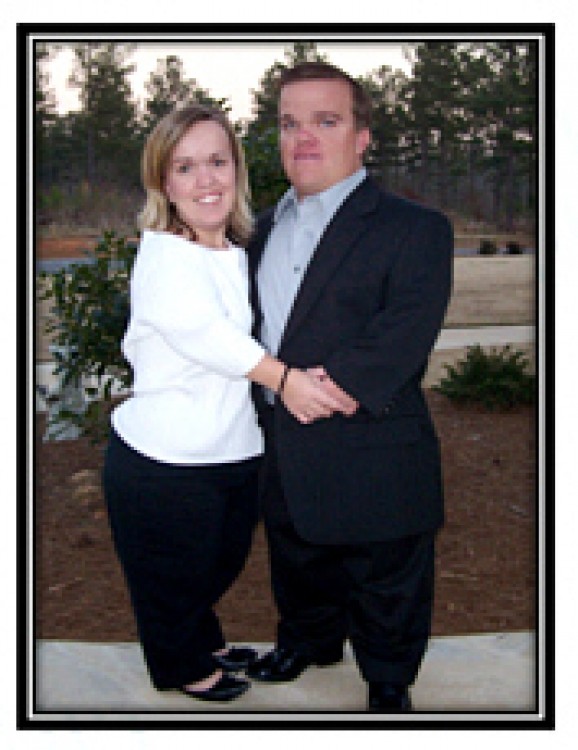 In 2006, the Johnston family shared their story of adopting a child with a form of dwarfism in the article Embracing Anna. We thought our readers might enjoy an update on this dynamic, and ever-growing family.

After three and half years of courtship on November 21, 1998 my husband and I got married at his home church in Ellenwood, GA. We had a beautiful wedding that all of our family and friends came together to celebrate. Trent and I always knew we wanted to have a big family. We also knew that by us both having Achondroplasia Dwarfism we would encounter risks genetically as well as my four foot tall body handling pregnancy. Five months into our marriage, much to our surprise, Trent and I were expecting our first child. Extremely nervous, scared, and anxious we began going to routine doctor visits to monitor the baby, as well as my health.  At 18 weeks gestation I underwent a 4-D ultrasound to determine if the baby was going to be one of three things: have Achondroplasia, be average height, or carry both dwarfism genes and be homozygous which would be fatal shortly after birth. The perinatologist was able to rule out homozygous, but could not determine until later in the pregnancy if the child would be a dwarf or average height. We were seen by the perinatologist every month and finally at 31 weeks gestation, at which I was measuring 36 weeks, he determined that our son would have Achondroplasia. My husband and I were thrilled. We could not believe it! At 35 ½ weeks, I delivered because I no longer had room in my torso area for this baby. I could no longer breathe. Our son, Jonah, came into the world not breathing, not crying, lifeless. The doctors were able to revive him and place him on a ventilator. He remained in the NICU for 6 weeks. Throughout Jonah’s first year of life he was in and out of the hospital, enduring surgeries due to his dwarfism and prematurity.

In December of 2001, we welcomed our daughter Elizabeth into the world at 37 weeks gestation. She too was diagnosed with Achondroplasia Dwarfism. The pregnancy was grueling and very painful. I had a great deal of trouble with my hips repeatedly becoming dislocated. Only being 48 inches tall and measuring 51 inches around at the time of delivery Trent and I knew my body could not tolerate another pregnancy, therefore I underwent a tubal ligation during the c-section. We knew that our dream of having a large family was still conceivable through adoption. Growing up as a little person in an average size family, I always knew I wanted children and I wanted them to be little like me. I was aware of how children with dwarfism were placed for adoption. Trent has two older siblings that are adopted; therefore adoption is close to his heart, too! We knew that when and if God was ready for Trent and I to expand our family he would let us know; and sure enough he did!

In March 2004, I received an email from Shepherd’s Crook adoption ministry asking to help find a Russian orphan with Achondroplasia Dwarfism a home. I was a district director of Little People of America, an organization that provides support and information to people with dwarfism, and was more than happy to help. I asked for more information on the child and as we read her bio, we completely felt as if she was one of our children. We knew in our hearts this child was meant to be our daughter. That very night, we began our journey through adoption.

We completed this adoption from beginning to end in an astonishing 13 weeks. Our church family was extremely supportive. They thought it was absolutely wonderful that a couple who already had 2 biological children would feel led to adopt a child all the way from Siberia. Russia approved 1 trip to bring our daughter home. On June 23, 2004 we landed in Moscow and three days later we were in Siberia. The Director of the orphanage made a special weekend trip to meet us. With tears in her eyes, (speaking in Russian) she told us how happy she was for our daughter. Then, it was time to meet her! Oh! How perfect and beautiful she was!
On July 1, 2005, as tears streamed down the caretakers face, she put her in my arms. All, including the judge, were elated to see our daughter receive the family she deserved. On July 8, we landed in Atlanta, GA. Upon arriving at Trent’s parents’ home where our other 2 children stayed, everyone came running with excitement! Our 2 children were thrilled and amazed that we brought Anna home for them. Our new daughter immediately bonded with all of us.

In December 2005, we received a phone call from an agency in Colorado ironically asking the same question, “Do you know of a family that would be interested in adopting a baby boy with dwarfism from South Korea?” Trent and I were astonished. We had been praying for a son to complete our family. Our oldest son longed for a brother, but I thought to myself, “Can we do this again?” Again, I asked for some information on the child. The agency sent pictures, medical diagnosis and a video. The diagnosis at first was just dwarfism until the genetic test came back and confirmed he had Achondroplasia. By that time we had began the process of adopting him. Alex’s adoption process was very different from Anna’s. Soon after we begun the adoption process, we hit a major road block. South Korea requires the adoption fee to be paid in full at the beginning of the process; therefore we did not have the funds or the time to fundraise. Every day it took us to acquire the funds necessary was one more day our son was not receiving the medical treatment and care he needed. Hours seemed like days. I spoke with the pastor of our church and he suggested raising the funds over the next several months. Overcome with emotion, I explained we do not have weeks or months! Fifteen minutes after returning home from that conversation, our phone rang. It was our pastor informing us that a couple from our church inquired about our adoption that same evening and volunteered to write out a check for the entire amount, $15, 150. I could not believe it! I hung up the phone and was without words. My husband asked, “Who was that”? I told him.

On May 17, 2006, our children were overjoyed to finally meet their new brother, Alex. A few months after Alex’s arrival we received a grant from Show Hope and Gift of Adoption. We were able to give back to the amazing family who made our adoption possible.

Shortly after our son’s arrival, my husband and I had a long conversation regarding Alex ethnically looking different than the rest of our family. My husband felt very strongly that it was important for our family to adopt a second Asian child with dwarfism (if one is to come available). To be honest, I was not so sure. We had four children and Alex was a blessing from God, but a very challenging baby.

Since Alex's homecoming, Trent and I felt that we had room in our hearts for one more child. We both felt that it was very important for Alex to have a sibling that shared the same physical characteristics as him and we have grown to realize that Alex needs a sibling closer to his age. So, our family continues to grow and in October 2009, I received a call from a lady that works for an agency that I had been working with regarding other dwarf children available in China. She was very excited to let me know that a beautiful little girl was awaiting a family in an orphanage in Baoding, China. Sabrina knew that Trent and I wanted to expand our family one more time, but were deciding which country, etc. She felt that this little girl was a perfect match and was very eager to email me the child's profile. Trent and I opened the file and once again felt the feeling! Her smile was amazing. She was just a few months older than Alex, which still left him to be the baby; she was a perfect match for our family!

The adoption process was much different. It was extremely long and tedious. A year later on October 9, 2010, Trent and I boarded the plane to Beijing, China. We were on our way to bring our daughter Emma Lee home. The finale to our growing family! The flight was very long and both of our bottoms hurt. We landed in Beijing and our guide Sunny picked us up. We took a 2 hour train ride to Emma's province. The next morning was Gotcha Day (October 11, 2010). We met Emma at the adoption affairs office. She warmed up very quickley. It was amazing. We spent 5 more days in her province and then flew to Guangzhou, China. Guangzhou is where the remaining of the adoption paperwork and the swearing in ceremony took place. Trent, Emma and I had a wonderful time in Guangzhou. We had fantastic guides, ate wonderful Chinese food, shopped, sightseed and met some fantastic families. October 23, 2010 we began our journey home. 4 planes and a taxi cab later, we finally arrived at ATL-Hartsfield Airport at 9pm. Trent and I were so anxious to get home to see our children, but we first had to share Emma with Nana, Poppy and family. We finally pulled in to our driveway at 12:30am. It was wonderful. Pawpaw woke the kids up just before we arrived. Emma had gotten a bit of a power nap. Everyone was so excited to see each other. The first meeting is what I had so longed for. All of the children were so happy to meet her and she was very equally accepting of all of them!
We have now been a family of 7 for 10 weeks now, and I must say it has been the easiest transition! Everyone is doing marvelous. Of course, we have the normal sibling bickering, but all in all it has been blissful and as if we have been a family of 7 for years! Trent and I are so very blessed and could not ask for anything more and we BOTH agree that we will remain a family of 7! Our children are our life!

Our children are not ours because they share our genes. They are ours because we have had the audacity to envision them. That, at the end of the day, or a long sleepless night, is how love really works. Amber Johnson

The Only Hope for Us