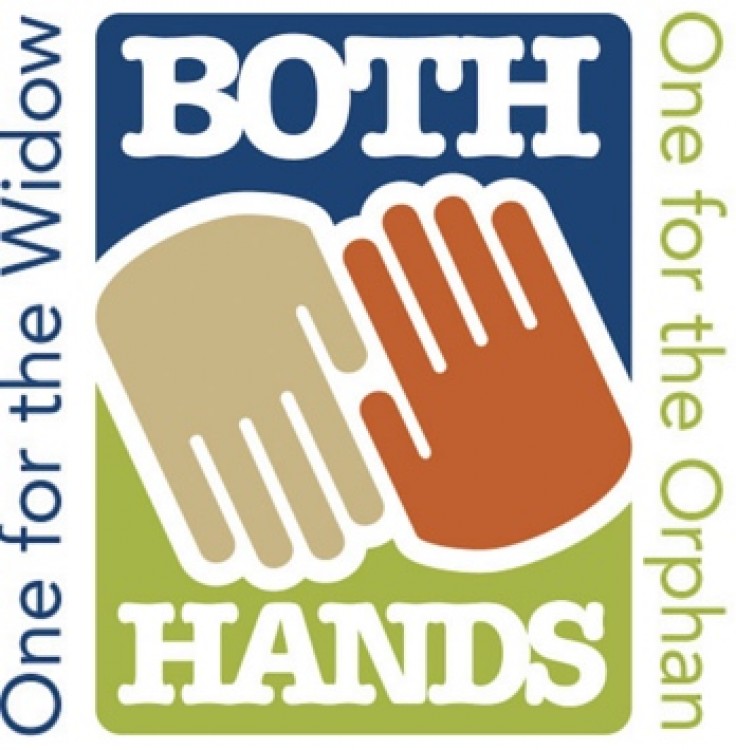 Both Hands is a different kind of adoption fundraiser. An adoptive family recruits a team of volunteers and Both Hands coaches them to coordinate a service project fixing up a widow's home. Similar to a 5k race or golf charity event, the volunteer team sends letters to raise sponsorship for their day of service. However, instead of running or golfing, the team serves a widow in their community. Megan has graciously offered to share her Both Hands fundraising story with our RainbowKids community.

Like many adopting families, my husband and I needed to raise a huge portion of the costs to bring our son home.  We estimated that we would need to raise about $25,000. It was daunting, to say the least, but we had peace that God had called us to our son and that He would provide.  When I watched the Both Hands introductory video I knew this was how God was going to fund our adoption.

Both Hands was easy to work with from the start.  The timing of our application left us only about 5 weeks to get our project put together.  I called Both Hands and explained the urgency. That same day, JT Olson, Both Hands’ founder and executive director called me to notify us of our application approval. He happened to be traveling in our state, so we met in person to go over the project details.  I never would have expected the founder and executive director of a foundation to become our biggest cheerleader, but JT and the entire team at Both Hands were readily available and proactively supportive throughout our entire project.

The major components of a Both Hands project are:

We were a little stumped at first in finding a widow to serve for our project. After several dead ends, an old acquaintance connected me to a widow named Susan. I met with Susan to learn more about her and explain our adoption fundraiser.  We sat in her living room and talked like old friends.  She shared her family’s story and told me about her husband, Thom.  I met her teenage and young adult children.  We walked through her home and compiled a “task wish list” of projects, exactly the kinds of things we were looking for – cleaning, painting, small repairs, etc.  The most remarkable part of our meeting came when we stepped outside.  Susan confided in me that some things I had shared about our son’s medical needs shed some light on issues that her own daughter had been dealing with for years and didn’t know how to address.  I thought, “Only God can use a project like this to bring together two strangers for such incredible mutual encouragement.”  Not one single detail of this project was outside of God’s vision.  I knew at that point that even if we raised nothing through our project it would be worthwhile.

Both Hands’ staff coached us on recruiting our team and explaining our mission. To assemble our team, we set up an info meeting and invited everyone we could think of. We discussed the project and invited them to pray about joining us.  We had about 14 people serve on our team sending letters and/or working on the project day. They were the backbone of the success of our project. Since our team was a collection of friends from different circles, we had a wider distribution of our letters. We even had two out-of-state friends send letters who could not work on the actual project day Our team met again before our project for our “Letter Party”. Both Hands provided letter templates and reviewed our letter.  They also encourage all letter senders to hand-write a personal note on every letter. People will donate for one of two reasons; either they love your project and the cause of adoption or they love the person who sent them the letter. We addressed and hand-wrote notes on all of our sponsorship letters. Our family sent out about 150 letters and the team sent out about 400, mostly to people who were strangers to us.  I do not take for granted the fact that my team members were willing to leverage their contacts on our behalf.  It is both humbling and exhilarating to realize that the majority of donors are connected to us only through mutual friendship with our team members.

After assembling our team, sending letters, and making a “task wish list” with Ms. Susan, our next task was to gather donated supplies. Since our Both Hands project is a fundraiser, our project day focused on inexpensive tasks that would only require materials we could have donated by local businesses to minimize our costs. After several afternoons of disappointments with stores who directed me to their corporate offices or otherwise couldn’t make donations on the spot, I turned down Main Street and had great success with some local small businesses. We ended up with a toilet, microwave, flooring, cleaning supplies, window blinds, paint, etc.  Even some individuals we knew donated enough Kohl’s cash to give her bathroom a complete update!

Our workday didn’t go entirely as planned as some projects took longer than anticipated, but we stuck it out as a team. We worked hard ahead of time to organize the projects by priority and skill level and designated certain tasks as child or family friendly so that everyone could be involved. We carefully treated a bathroom that had mold damage, updated another one for her teenage daughters, replaced a toilet and fixed a sink that hadn’t worked in years, replaced rotted flooring.  These are the kinds of things that Susan would have relied on Thom to take care of and wasn’t able to do on her own after he passed away.  We were even privileged to complete some projects that Thom had begun before he became sick.  We patched walls and painted, landscaped her yard, and refinished a gate. She now has blinds behind her kitchen sink where sheets had been hanging for years.  It was a life-changing day for everyone involved. The final piece of our Both Hands project was the follow-up.  Both Hands encourages families to have a video put together with pictures of the work day and before and after photos within 48 hours of the project. Each team member shares a link to the video, which also contains information on how to donate.  You can view our video here. Often about 50% of the support comes in after the project is complete and the video has been shared.  Of course, follow-up also includes sending thank you notes to each donor and a suggested update letter once your child is home.

The only cost to the family for this project is the letter printing, envelopes and postage, although we were able to get most of that donated.  Coordinating the project felt like a full-time job for about a month, but when it was all said and done, we had raised over $20,000 for our adoption!  The success of our fundraiser took our adoption story to a whole new level. A girl who we had seen in nearly every picture of our son from his orphanage had worked her way into our hearts.  With our funding nearly complete several months before travel, we considered that we might be able to adopt two children and bring her home with our son!  Ultimately the simultaneous adoption did not work out, but because funds did not stand in the way of opening our hearts to this little girl, we’re now in the process of making her our daughter.  We are eager to see how God provides to bring her home!

Since starting in 2008, Both Hands has completed over 522 projects across 41 states, brought over 583 orphans closer to home, served over 574 widows and enabled over 15,000 volunteers to impact their community. With raising a total of over $6 million for adoptions and orphan causes, Both Hands has been heralded as one of the leading adoption fundraisers.

Committed to raising its own support separately, no funds are deducted for Both Hands' operating costs. All of the funds received help an orphan be adopted into a forever family, a widow is provided with free labor and all of the volunteers serve their community.

Contact Both Hands to get started on your adoption fundraiser today.