Advocating for Your Child's School Needs 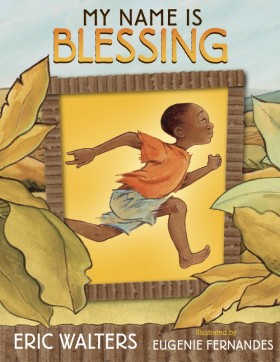 Book Review: My Name Is Blessing

Muthini – whose name means “suffering … [a]ll because he was born with no fingers on his left and only two on his right” – is the youngest of nine children who live with their grandmother in Kenya. What Nyanya – grandmother – lacks in money or food, she makes up with “extra portions of love.” One day, Nyanya takes the long, difficult walk to Muthini’s school to tell him she can no longer care for him: “He was too young and she was too old.”

With tears and resignation, Nyaya and Muthini walk “hand in hand” to meet a man named Gabriel whose home is filled with children laughing and playing. Gabriel tells the tired pair that he has “‘no room for Muthini … But there is always room for a blessing.'” Muthini becomes Baraka; by changing his name, he changes his future: “‘I can never look at you and see suffering and I don’t want others to see it either,'” Gabriel explains, “‘I want them to hear your name and see what I see, what your Nyanya sees: a blessing. Baraka.'” And thus Baraka’s new life begins …

Here’s the best part of this book: it’s true! The final five pages re-tells the story with on-site photographs that begin, “Baraka is a real person. And so is Grace, his grandmother or Nyanya.” Award-winning Canadian author Eric Walters – who’s written over 90 titles for children and young adults! – co-founded and runs The Creation of Hope which cares for Kenyan orphans, including Baraka and his family; Baraka is directly sponsored by Walters’ own daughter and her friend. For you savvy givers, rest assured, “A commitment has been made that 100% of money that comes from schools or children will always go to service“: 23 cents pays to plant a sapling, $20 will purchase farm tools for a family, and $50 will cover the costs of the Rolling Hills Residence for a full day. And after reading Blessing’s story, surely you’ll be hard pressed not to want to share you own blessings with others, too …