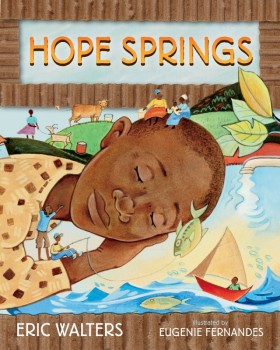 “As the biggest, [Boniface] had to care for the littlest.” He’s one of the older boys living in a Kenyan orphanage, known for his gentleness and patience. “[A]ll the children in the orphanage were like a family.”

On one of their outings to fetch water at a nearby spring, the children are angrily, forcibly turned away by a group of local women. “‘You may live here, but you are not from here,'” one woman shouts. “‘This is our water for our families.'” With so little water for so many people, the situation is desperate for all.

The orphanage, however, is lucky: a well is being constructed on their grounds. When it finally gushes forth, the orphanage is saved. And yet, Boniface still cannot quell his worries, because his kind heart knows that the villagers won’t get enough from a single spring that merely trickles, sometimes only drop by drop. His name Boniface – meaning “good fate” – couldn’t be more fitting, even more so because he is so willing to share his good fate with others. Unable to sleep, he presents his generous idea to build another well for the villagers to his house parent Henry, and so the planning begins…

Hope Springs has an equally inspiring companion title, My Name Is Blessing, created by the same author/artist team — clearly, Eric Walters and Eugenie Fernandes are a tried and true dynamic duo. Both stories originate from Canadian writer Walters’ The Creation of Hope, a foundation he co-founded and runs in Kenya, which includes the Rolling Hills Residence that is home to both Boniface and Blessing from My Name Is Blessing. Again, as in Blessing, the final five pages here present “The Story Behind the Story,” with pictures of the real-life Boniface, his twin brother Charles, and the “littlest” child from the first page, Mueni. Henry and Ruth, the house parents, are also real; sadly, Walters’ opening dedication reveals that Henry passed away in December 2013.

Read about Boniface and Blessing both, get inspired, get online: 25 cents to The Creation of Hope pays to plant a sapling, $16 will buy a school uniform, $25 will purchase farm tools for a family, $50 will pay for a goat, $100 will cover the costs of the Residence for over 50 orphans for an entire day. Hope springs more quickly with a little help from friends.