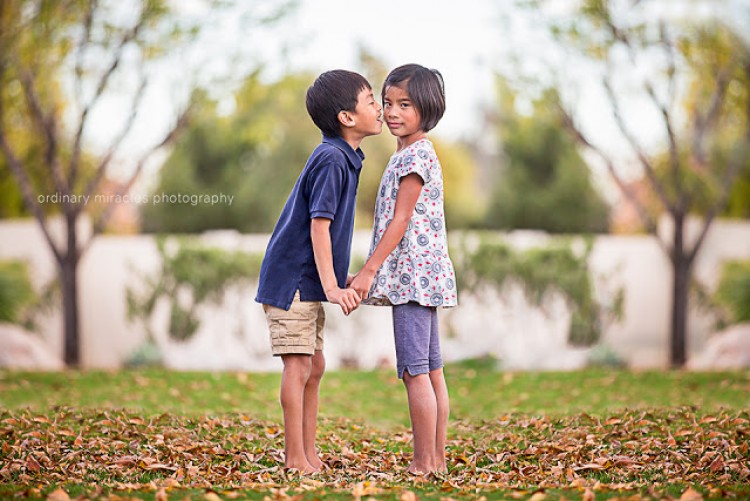 We are excited to share a family journey to adopting a son in 2017. Nancy has agreed to share her adoption story through a series of articles on RainbowKids. Her blog, Ordinary Miracles & The Crazy 9, documents the daily life of parenting a big family. Through her gift of photography and the written word Nancy captures her growing family through the lens of a DSLR camera. Read her prior posts: It's A Boy! (a.k.a. Why Even is Better Than Odd. Not Really) and The Adoption Process: Patience. Not on Rainbowkids.

Tess and Jude, birthdays separated by only 28 days. Born in the same hospital, transferred to the same orphanage on the same day, and often crib mates until we were untied with them a year later.

Adopting a child (or children) that is biologically unrelated and very close in age, to a sibling (closer than 9 months) has been coined artificial twinning. Sometimes this is done by adopting a child that is close in age to the child a family already has, and sometimes it's done by adopting 2 children that are close in age, at the same time. The controversy about whether or not artificial twinning (also known as virtual twins, pseudo twins, like-twins) is ongoing. Many countries and adoptions agencies don't even allow it, and many folks "in the know" discourage it. I totally understand why, and keeping it real I do not recommend that families adopt 2 children at the same time unless they are biologically related.

Every child needs the room to find themselves an their place in the family. That's hard to do for an adopted child to do, but add in another child that is the same age (and possibly gender) and it's even more challenging. And adopting a child that has been institutionalized just compounds the potential problems. Parents need time and resources to learn about their new child, help them adjust, and this is most easily done one at a time. Inevitable comparisons and all the pitfalls of it, are inherent with raising artificial twins. And attachment, the end all be all of adoption parenting, is more than twice as hard when trying to attach with and teach attachment from 2 children rather than just one. I get it. Really I do. Virtual twins are more than twice as hard as children that are nice and spaced out and each have their own place in the family rather than needed to share it with a sibling.

Now this is the part where I'm going to come off as a hypocrite, but you see, we didn't know any better. We purposefully adopted 2 not-biologically related children who were close in age, our not-twins. And not only did it work out okay for us, but it's kinda the best case scenario. Tess and Jude, 28 days apart, were adopted at the same time, long before we were educated about all the warnings and difficulties of raising artificial twins. There were and are so many hurdles to overcome to have two children the same age. But there are so many wonderful things about it too. Where Jude fell short in his physical development, Tess took the lead, and he was pushed to physically develop faster by trying to keep up with her. And where Tess fell behind, he was her role model. Tess and Jude have known each other longer than they've known us, and as they've grown, they've really developed into best friends even if they know know it. They much prefer each other's company, and I cannot image a day that they aren't together. Don't get me wrong. Adopting a child for the purpose of creating a playmate with your child is never a good idea. We just happened to get lucky that Tess and Jude are this close. Another coincidence is that even though Tess and Jude are not biologically related, they are and always have been very similar in size, (There has never been more than 2" and 2 lb difference between them.) and that often leads to the question Are they twins? Which we get asked very often. And our reply, Not, they're not twins. has now been uttered so many times that we now refer to Tess and Jude as our not-twins.

These days Tess and Jude are in the same school and the same 3rd-grade classroom. At school they are friends but don't necessarily hang out with each other. They are comfortable being in the same space but don't need to be together to feel secure. They have their own likes and their own friends. Contrastingly, at home, they are usually side-by-side, rushing through homework so that they can play together. Mimi is the third musketeer of their trio, but there is something about Tess and Jude's bond that goes beyond being siblings and special friends. This is due in part to good luck and in part to years of working on attachment and teaching each of our children that they are unique and special in their own way, yet a part of family unit that treasures their individuality... well at least that's what we're trying to do.

But let's start here. You see, we have a problem... well it's one of many problems 'cause keeping it real we've got lots of issues!

My husband and I are getting old(er), and we both have concluded that our baby rearing days are behind us. I loved loved loved having babies and being a mom to a baby, and chubby little thighs! I wondered for the majority of my 30's and into my early 40's if I'd ever get past that baby fever that I felt every time I saw a baby. But eventually, (Thank you, Lord!) I finally did get that feeling that we were done having babies, and the next babies would surly be grand babies only. Surprisingly though we didn't feel like we were done having children.

Enter older child adoption.
Maybe not surprisingly, older-child adoption is something we've always felt drawn to, but our family just hasn't been in a place to consider it till recently. Thanks to Tess and Jude, we'd done the not-twin thing already, and felt pretty confident that we had the skills to do it again, although virtual twinning wasn't something we were necessarily looking to do. When we started to really be intentional about what type of child would work in our family this time around, we already knew we wanted a boy, and after a lot of thought and prayer, we decided a child around Mimi's age up to a year younger would be what would work best for all of us.

And then Ru showed up...

and there was lots of research...
and discussions...
and prayer...
and we just could not get him out of our heads.
And then there comes a moment when you just know. You know he's the one, regardless of age, or gender or special need. You just know he's your son, and there's no looking back.

So Mimi wants to tell you that she's excited that just like Tess and Jude, she's gonna be a not-twin too! Ru & Mimi's birthdays are separated by only 18 days. Ru is 6 years old, but will turn 7 just before we travel to get him. Mimi's eager to tell everyone about her new brother, her very own not-twin is joining our family! We know that she doesn't really comprehend the challenges that come with having a not-twin, and we're doing our best to prepare her for those challenges. And really it's a privilege to get to do that for them both!

The paperwork is crawling along, and currently we're waiting on approval for our Ru's U.S. visa approval (I800) so when he comes home, he'll be a U.S. citizen as soon as he steps foot on American soil. We don't specifically know when we'll travel to get him, but right now it's looking like springtime! EEEEEEKKKKK!

Think You Can't Afford Adoption? Here are 10 Surprising Ways to Pay for It