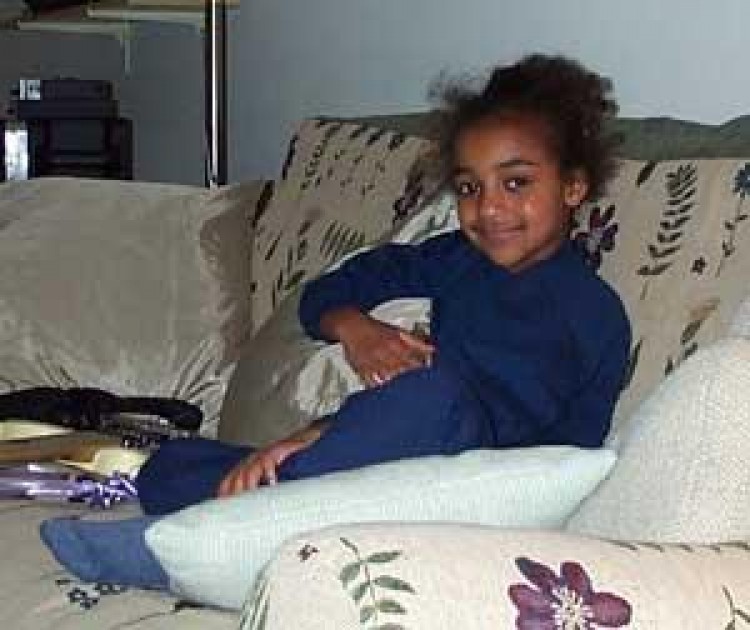 On October 26th, my wife and I traveled to the airport at Newark, New Jersey, to meet and bring home a little girl from Ethiopia who would become our adopted daughter. Orphaned a few years ago because of the AIDS epidemic in her country, Sasahulesh Tadele (age approximately 7 years) lived with family relatives and in various orphanages around Addis Ababa before finally coming to live at the foster home of Americans for African Adoptions (AFAA)

This diary entry from early November, 2002 describes the little girl's arrival in America.

I've been trying to write up some extraordinary memories of the past few days for family safekeeping while our child has been sleeping. Since the AFAA clients and progeny are a collective family of which we are a part, I hope it's okay to share some of this in detail.

We are immensely grateful to Randy and Bob for all their work in bringing the children over. After getting to the airport terminal at 5:00 a.m. and waiting five hours for the group to land and pass through Immigration, it was quite a sight to see two American men approaching with five energetic African angels in tow, all dressed in red jackets and traditional garb. The children were the most gorgeous little peanuts, scampering around delighted with each other's company, which they've apparently enjoyed over the past weeks and months.

That is why what happened next was so difficult and painful for our daughter Sasahulesh (7 years old). We had to separate her from her little soulmates who were traveling on to other cities. She comprehended what was going to happen and became distraught, then full-blown hysterical. With every muscle in her body she strained to get away from us and back with her little friends. My brother had driven in from NYC and brought a little teddy bear for her, but she wanted nothing to do with it. She cried and implored Randy to take her with them. Rebecca couldn't restrain her and it was just awful as I had to go through contortions to hold her back (which made for an aerobic workout, not to mention a spectacle in the airport for the next hour).

Despite the pressure of the situation, I could understand Sasahulesh's position and I felt the force of her grief very clearly. The only thing I could do was summon compassion toward her state and hold on for dear life. When her hysteria peaked, I had to wrap my arms and legs around the little girl and sit us down on the sidewalk for fear she would get away and run into the street traffic. There was no way we could keep her in the car with Rebecca in the back seat trying to contain her in that condition; it would have caused an accident.

A few people tried to help us through this harrowing first encounter. Friendly Ethiopians consoled her in Amharic, to no avail. One English-speaking woman even came over and prayed over me and the the child.

Finally an idea clicked in my mind; I took Sasahulesh by the hand and allowed her to lead me for a long walk all over the airport so she could look high and low for her friends. We walked and walked through the long terminal, inside and outside. By degrees she became calmer, though her tears flowed the whole time. Then by stroke of fortune, we met an Ethiopian traveler who calls himself Gigi -- he was waiting to catch a shuttle to Philadelphia. Recognizing our plight, he was very kind and spent more than an hour with me and the little girl, nearly missing his shuttle in the process. (I found out later that my brother paid off the irritable van driver to stay put while we attended to the child!)

With Gigi serving as an interpreter and ad hoc guidance counselor, I entered into a three-way conversation with him and Sasahulesh. We covered some serious ground and addressed the issues on her mind. Sasahulesh said she understood that I was her new father, but why had I not come out to Ethiopia with Randy and Bob to be with her? That seemed to be *very* important to her. She spoke with clear conviction in Amharic to Gigi and me, and I also watched her listening attentively as Gigi translated everything I had to say.

In those moments I came to see that in some ways, my child is an adult in a little person's body. She is very intelligent, and definitely knows the score about what's taken place with this adoption.

It would be difficult now to recount our conversation but I can tell you it was remarkable. I spoke candidly with Sasahulesh, telling her what kind of household she was joining and what she could expect from us as parents. I told her that in our family we will never, ever hit a child; and I asked her to please not hit me. I told her how deeply sorry I was to take her away from her friends; that I had wanted so much to meet with her in Africa; and that we would not leave for home until she herself said it was okay to go.

Little by little something melted within her and she let go of her pain and accepted what is to be. My brother said he noticed that her change of heart began when I let go of her hand and sat down on the floor while she stood over me listening to my account. He watched her looking me over then, particularly at the top of my head; and to him it seemed she could see how I was affected by her pain and turmoil.

A few hours after the storm started, all was resolved and we were ready to leave. My brother offered Sasahulesh the teddy bear again and she accepted it to everyone's relief; then she even smiled and posed for a few photographs. She climbed into the car clutching the bear, and as we drove off she fell into a deep sleep -- which lasted for the five hours driving upstate and many hours into the night at home. The overseas flight and intense expenditure of this episode had wiped her out. When we carried her into the house and put her into bed, her clothes were soaked in sweat.

I said to Rebecca, "I guess this is the closest I'll ever come to experiencing childbirth."

It was great to be home but we were worried, because during the many hours since we first met Sasahulesh at the airport, she never once went to the bathroom or took even a sip of water. Then I awakened around 3:00 a.m. to the sound of her crying and whimpering softly in her bed. I invited her to come out for a walk around the house, and she took my hand. The first room we found was the bathroom, which she immediately used (much to my relief as well as hers). Then we went exploring her new environs; we said hello to the cat, and eventually settled downstairs to watch late-night cartoons on various cable kid channels. Rebecca brought down a tray with some oatmeal, bananas and juice which she ate heartily. By then, I was fading fast and had to go upstairs and pass out for a while -- we had gotten very little sleep over the past two days.

Around 8:30 a.m. I awakened to various sounds: the piano being pounded, followed by gales of laughter from Rebecca and a bunch of thumping out in the living room. I came out to find our daughter giving a proud and impressive demonstration of her jump-rope skills.

Now during these "first days on the job," all traces of the initial ordeal have vanished. We have been graced with a happy, agreeable and affectionate child. She loves to dance, sing Ethiopian songs, play with balls and balloons; she's incredibly agile and creative with her body. We have been strumming on guitars together, kicking a soccer ball around in the park, watching Sesame Street and Disney Channel cartoons -- all the stuff I could hardly dare to dream we would do. She's an ace marbles player and has been teaching me to play in the living room every morning.

What amazes me most is that she is incredibly glad to have new parents and has been finding ways to convey it to us. Today she has been saying things like "Hi Dad," "There's Mom!" "thank you," and "sleepy kitty." I also did a double take when I heard her start reciting the English alphabet and numbers.

We have been calling her "Sasha" and she responds to the name with no problem. The other morning we went to the family doctor for a checkup and she took two inoculation shots in each arm without even blinking. Then we surprised her with a visit to the local Ethiopian restaurant owned by friends who speak Amharic. This amused Sasahulesh immensely.

With our child finally coming home, Rebecca and I are at the conclusion of one ten-month process which many others have gone through (or will go through); and now we are at the start of something entirely new which is more profound in micro-detail than I could have imagined. I don't doubt there will be challenges and difficulties ahead, but for now all we can do is be present to the experiences each day brings one at a time.

Visit the Americans for African Adoptions website at www.africanadoptions.org for more information about their adoption programs in Ethiopia and Liberia