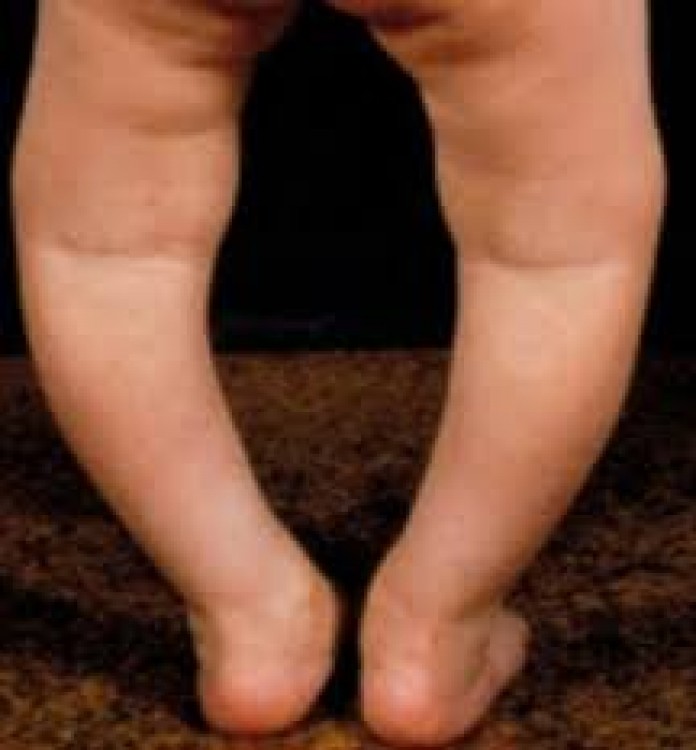 Rickets is a failure of the proper development (mineralization) of growing bone. It is probably present in 100% of all children adopted from institutions, even when it is not apparent to the observer. The predominant cause of rickets in orphanages abroad is nutritional deficiency of vitamin D due either to inadequate direct exposure to ultraviolet rays in sunlight or to inadequate intake of vitamin D, or both. Sunlight is necessary for the formation of vitamin D in the human body and vitamin D is necessary to make bone in the human body. Inadequate calcium and phosphorus in a child's diet also contributes to the development of rickets.

When a child first arrives from an institution, rickets can be diagnosed by a skilled pediatrician who performs a thorough physical exam and orders a blood test called a "rickets screen". The rickets screen consists of alkaline phosphatase, calcium, and phosphorus. The calcium, phosphorus, and alkaline phosphatase levels in the blood may help support the diagnosis of rickets. The child with mild rickets may have no abnormalities in the rickets screen and a normal diet will effectively reverse any weakness in bones and muscles. If the child has bow legs, raised bony bumps along the ribs (rachitic rosaries), frontal bossing of the skull, and other deformities of the bones, rickets might be the cause. Some children have no obvious bony deformities, but still may have weak bones and muscles from a mild form of rickets.

When there is vitamin D deficiency over time, the bones lose their rigidity and become distorted making them at risk for fractures. Older children adopted from orphanages often have had fractures due to rickets and the healing of the fracture causes unusually shaped bones. This can be miscontrued as child abuse. The flaring of bone due to rickets can cause deformities such as the classic rachitic rosary (bony bumps) seen on the ribs of children. Thickening of the wrists and ankles are other early evidences of rickets. Bones of the spine, pelvis, and long bones of the legs can be distorted. Bow legs can be the result of rickets. The soft spot on top of a baby's heed can be enlarged and closure may be delayed past 2 years (normal time of closure is 8-18 months without rickets). The shape of the head may become box-like due to thickening of the skull bones. Exaggerated sweating particularly around the head may also be present This phenomenon is not well-understood by scientists, but I can personally vouch for its occurrence every day in my office when I evaluate a newly adopted sweaty-headed child who has recently been adopted!

Eruption of the baby teeth may be delayed and there may be defects of the enamel and extensive decay of the teeth. Permanent teeth may also inevitably be affected. Muscles are poorly developed and decreased tone is common in rickets. Vitamin D is essential for the absorption of calcium and calcium is necessary for muscle function. Standing and walking are often delayed because of this decreased muscle tone. These are all reversible conditions with mild or moderate rickets. The treatment of rickets is vitamin D containing foods such as milk, soy products fortified with calcium and vitamin D, or formula which is fortified with vitamin D. Exposure to natural and artificial light is necessary. Some infants and children may require vitamin D supplements for weeks, months, or years.

Immediate vitamin supplements with a children's liquid or chewable vitamin like "Tri-vi-sol" (A,D,C) or "Poly-vi-sol" (A,D,C, B) will be enough to correct mild rickets. Moderate to severe rickets may require higher doses of vitamin D for longer periods of time and this must be supervised by a pediatrician who has experience in treating rickets. Vitamin D dosing must be determined by a physician as more is not better! X-rays of the knees of children with moderate and severe rickets can help the pediatrician to determine the dose and duration of vitamin D therapy. Most cases of rickets diagnosed in the first few years of life, are responsive to good nutrition and vitamin D supplementation. Children who do not enjoy milk products or are lactose intolerant as many Asian children are, can get vitamin D in soy enriched products. Calcium is found in broccoli, and even "Turns" can be administered under a pediatrician's supervision. Vitamin D is given as a liquid or a chewable as mentioned above. Severe rickets can be arrested, but the bony deformities may be lifelong. The severity of rickets depends on the duration and extent of nutritional deprivation. Severe rickets is very uncommon in young children adopted from China.

The overwhelming majority of the children who I have evaluated have had mild to moderate rickets with excellent response to a simple course of vitamin D therapy and a good old fashioned American diet. Delayed eruption of baby teeth, bow legs, decreased muscle tone and delayed motor development, a box-like shaped head with frontal bossing, and a sweaty head are the most common manifestations of rickets in my daily practice. The psych-social growth delay so prevalent in children living in orphanages is not well-understood, but it is clear to me that rickets may contribute to growth failure.

This article was originally published on the website of Dr. Jane Aronson, Orphandoctor.com