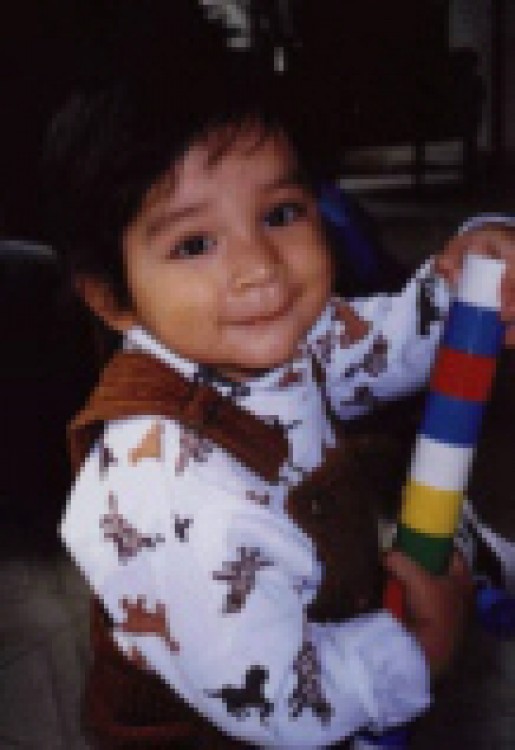 It is hard to believe our little Sandro has only been with us for ten weeks. We met our son on November 4, 1998, at Dallas/Ft. Worth International Airport. When he arrived from Guatemala he was 2 years, 3 months old. This is a day my husband and I and our three daughters will never forget. Sandro greeted his new family with a nervous smile, lots of hugs, and a readiness to join our family.

We first met Sandro through pictures thirteen months prior. He was then fourteen months old. Sandro has been our oldest child to come home. Our other two adopted children were eight months and nineteen months when they arrived home. We mentally prepared ourselves for some rough times in terms of adjustments when Sandro arrived. After all, Sandro was over two years old, was speaking simple sentences in Spanish (our family is not bilingual), and he was bound to be homesick for the only home he knew. In short, Sandro was being thrown into a culture shock. Yet, we knew it was going to be okay because we knew his home at LaEsperanza gave him a good foundation full of love. We knew this because our three year old came from LaEsperanza eighteen months before. Waiting for Sandro (13 months) was easier than the other two because we knew LaEsperanza was providing everything a family could possible, other than a Mommy and Daddy--yet that was in the near future.

We can honestly say Sandro showed no signs of adjustment problems or any signs of being delayed in any way physically, socially, or emotionally. We feel Sandro would not have been been any further along if we had him since birth. We were waiting for signs of withdrawal and depression. Thankfully, they never appeared. We laugh when we say Sandro's biggest insecurity with us was getting used to our Beagle. It can be intimidating living with a 32 pound animal you have never seen before. Just yesterday, I caught Sandro and our dog on the couch. Sandro was petting the dog, and she was cleaning his face with kisses.

Sandro arrived home very healthy with good medical reports and all vaccines up to date. His appetite was great and sleep habits were perfect (2 hour naps in the afternoon, and 12 hours at night). Knock on wood, Sandro never has woken up in the middle of the night. Sandro plays well with himself, but also he enjoys playing with his sisters and neighbors. He would be considered to be in the "terrible twos" by some; we like to think of it as the "curious twos."A few weeks ago our entire family was in a public situation and a stranger was observing us. We got to talking to her and she was shocked to learn that Sandro had only been with us such a short time. She said he looked so secure and the bond he had with us was so strong. Sandro understands everything we say to him; he is already attempting to speak English. He tries to keep up with his sisters, enjoys books, plays simple matching games, sings, dances, feeds himself and tries to dress himself. In short, Sandro is an average two-and-a-half year old with an exciting, stable, and loving future.It wasn't coincidental that our two children from LaEsperanza who had no one to call "Mommy and Daddy" arrived home to us developmentally on target, healthy, secure, able to bond, striving to interact, having a sense of humor, and full of mischief. LaEsperanza provided an environment to enhance all the above. We are forever grateful to the orphanage for being our Sandro's and Maria's first family, and teaching these kids to love. We look forward in the future to welcoming another child like Sandro or Maria and having the privilege to watch them grow in our family's love