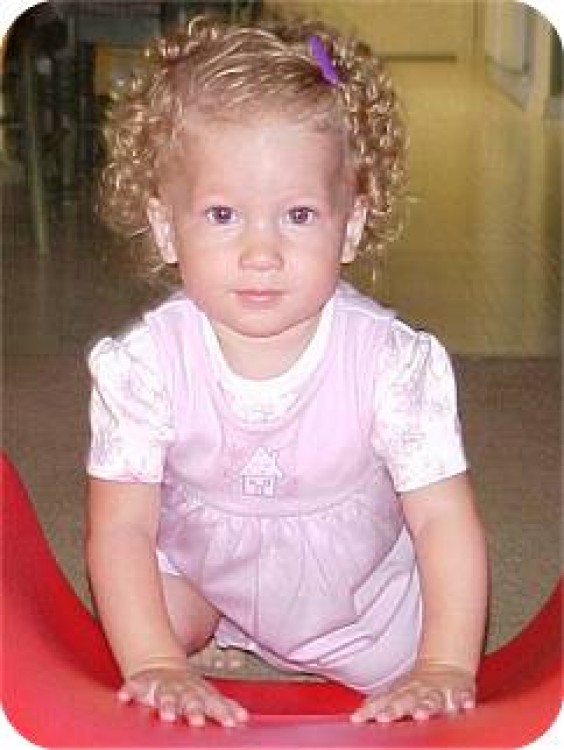 How do I begin to tell the story of a life? Do I start with the births of our own four biological sons? With each one my heart would swell with so much love I thought I would burst. Or do I start with the day I stood in my family room amidst Little Tykes toys of all kinds, trucks, cars, balls and such, and the Holy Spirit whispered to me, "God has blessed you with so much, you should share it with a child." That's not exactly where the story begins, but it is the day that changed our lives again forever. It was the day the dream of little Rachael Rena was born.

God had to start this work on me two years prior to that day, though. I'm not a very fast learner. I was listening to a Christian radio station and they were advertising an upcoming seminar for International Adoption. At the time I had three sons and was trying to talk my husband into baby #4. I certainly didn't think adoption was in our plans. For some unknown reason, I wrote down the web address to the organization that was having the seminar. It was www.ftia.org I kept it in my van for almost a week and then threw it away thinking I would never have time to look at the site or have any real reason to, either. A few days passed, and it seemed like every time I turned the car radio on, that advertisement was playing again. I ended up not going to the meeting, but I kept the web address in my car for about six months.

We then got pregnant with baby #4. About 6 months after he was born, I became acutely aware of the most adorable Chinese girl that had a sister in my son's preschool and a brother in my other son's school. Every day I would see this mother in the car rider line at both places, but I never went over to speak to her. I even went as far as to hold on to the steering wheel of my car one day so as not to get out of my car and talk to her. I kept telling myself, "You have four kids, how insane would you have to be to adopt another one? You don't need any more kids!"

The point I didn't see then was that this whole thing was not about me or what I needed. It was about what Rachael needed. I let the whole year go by, and in May the preschool put on a Mothers' Tea for the moms. The place cards are set around the room randomly. Wouldn't you know I would be seated right next to the Mom who had adopted from China ? It was more than I could take. I immediately started asking questions and she pulled out a business card for FTIA from her purse. Needless to say, I was stunned. All the way home I prayed to God to reveal to me what I was supposed to do with this information.

The next morning, I went to the web site and started reading the stories (just like you are doing now). They touched my very core - I only got through about four of them. The next morning, bright and early, I was back to reading the remaining stories. The next thing I know I am dialing the phone to talk to someone from FTIA. I spoke with Tina Hazelip. She told me a lot about the program and encouraged me to attend an informational meeting which (surprise) they were having that very night. I got off the phone and immediately called my husband (who, by the way, had absolutely no idea any of this was going on at all). I told him I had something really silly to ask him - and if he didn't want to do it, just say no, and it would be over - but there is an international adoption meeting tonight and would he be willing to go? Without hesitation he said, "Yes" followed by "but I have no intentions of adopting, we can barely afford the four we already have." We went to the meeting with all four boys, because we didn't know how we were going to explain what we were doing to anyone. We didn't get much information out of the meeting because we were chasing our one-year old around the room. But we did see all of the beautiful children with their beaming parents.

Three days later, we were talking about some different things going on in our lives and my husband told me about a dream he had the night before. He woke up, sat straight up and thought, "The worst you could do for her would be better than she would ever have over there". That sealed it. We sent the application off and began the journey. Let me assure all of you, we didn't have the money to do this. God is bigger than money! Please trust Him and He will reveal many creative ways to come up with the money. What is important is that these children, the last statistic I heard was one million of them, need loving, good people to take care of them, love them, and most of all, make them a part of a family. My biggest prayer is that you focus on the little life, not the cost.

Our journey wasn't smooth. We opted to go to a new region - and all that entails. On March 6 we got the call! I met our little girl on March 25th, 2002 . What a precious child! Here was this beautiful little blonde curly-haired, blue-eyed angel just waiting for me to come and bring her home. I knew in that instant, that she had been a part of our family for a long time, and this was just the way God had planned it all to happen.

One of the many surprises to occur on this trip was to find out Rachael's birth date. It was May 7th- the day my friend gave me the FTIA business card at the Mothers' Tea! I couldn't believe it. She was born on the same day we started the adventure to bring her home.

I wouldn't change a thing about our journey. In hindsight, every part was absolutely essential to the whole picture. My heartfelt advice to you is pray, roll with the changes, pray, then pray some more. God bless you on your journey. May it prove to be every bit as exciting, curious, and fulfilling as ours has been and continues to be! Remember:

I can do all things through Christ who strengthens me.

Contributed by Families Thru International Adoption