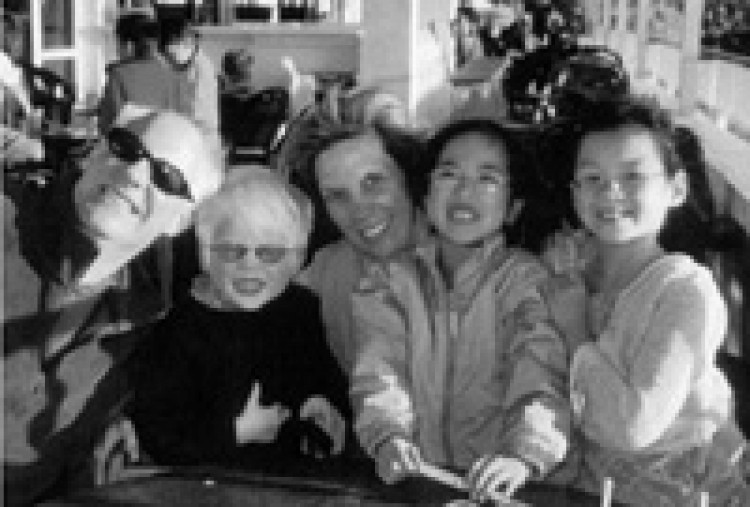 There are five people in our family: Gail and I, two daughters, and one son. All of our children are from China. Our son is the youngest, and his name is Mao-Han. We had already adopted two girls from China, Emily and Carrie. They had made us a family, and we were very content. We did not start having a family until we were older, only planned on having two children, and were very happy with two girls. We had no thoughts of adopting another child.

With each of the adoptions of our two girls, Gail and I were impressed with Wide Horizons, the relationship that they had built with the Chinese authorities, and how well the trips were organized. For the first trip, we were very anxious about being parents, about going to China, about meeting Emily-Rose Xiaoman Bergan for the first time, about the process of adoption, about traveling. The people who went with us on the trip are now our family; our China family. We love them all, and we have huge family reunions. With the second trip, to adopt Carrie, there was not a bit of anxiety, and we brought another beautiful person into our lives. Our China family doubled in size. Life was good.

One quiet Sunday afternoon Gail was reading the Wide Horizons newsletter and saw pictures of waiting children. One picture was of Mao-Han, a young boy with albinism. People with albinism do not have much pigment in their skin and hair, and thus appear very fair. They also tend to have low vision. I have albinism and am legally blind. This was a condition which Gail and I were intimately familiar with. In many ways having albinism has not hindered me. I am a physician, work for a large university developing new forms of therapy for people who have cancer, am married to someone whom I love very much, and have a wonderful family. In other ways, it has been very frustrating. I cannot drive, so Gail gets stuck doing all the driving.

Gail took one look at Mao-Han's picture, and her response was innate and instantaneous. "Let's adopt him", she said. We already had two children, and though we loved them deeply, we were just barely coping with the amount of work that was involved. I initially thought, one of us in the family already has a disability; that is enough. To adopt another child, particularly one who would bring a disability into the family, would just be too much. The remainder of the weekend passed without incident.

I had never really thought about being around someone else like me, who had the same problems. I thought of all the problems Mao-Han would have, of all the stares from strangers he would endure, and all the difficulties he would encounter, as he went through life. I thought about what the impact would be of having yet another person in the family who had physical limitations. My initial thoughts of all of this were not very positive nor pleasing, although I could not verbalize it at the time. I really did not understand these feelings myself.

However, there he was in that picture, on our table, looking right at us. And he needed a home. And we sure understood his problem. And he might just fit right into our family after all, and it might be good for all of us if he did. We decided we would just call Wide Horizons to just get a little more information. Nothing more. Well, you know what happens when you start walking down a path. The trip to China was fantastic, as usual, and our China family grew once again.

Mao-Han is in fact a true miracle child. Everything about him is a miracle. He was in the Fuzhou orphanage for four years. They have 225 children, and not an abundance of money. However, it was apparent that the children were loved, well taken care of, and were given as normal a life as is possible. Mao-Han is a testament to that. He is a beautiful, loving little boy.

Mao-Han looked very different from the other Chinese children. However, because he was so loving and fun to be around, every time the governor of the Fujian Province came to town, he would make a point of stopping in to pay a visit to Mao-Han. After we met Mao, we spent a week in the city of Fuzhou, where almost every place we went, we would hear someone call Mao-Han, and come running to him.

Mao is home with us now, and he is doing great. He was four when we adopted him, and spoke fluent Chinese. Mao could understand most of what we were saying within three weeks, and by three months could speak a lot of English. He fits right into our family, and gets along great with the girls. All of my baggage about what problems he may have in life is out the window. Mao continues to be lovable and fun, and everyone wants to be around him. He overcame miracle odds in China, then traveled to the other side of the world, and continues to work miracles. He is, in fact, the miracle child. We feel so blessed that he has joined our family, and cannot imagine life without him.