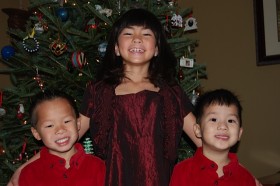 We are Michael and Ann Marie and we have adopted three children from China with Carolina Adoption Services. When we adopted our daughter in 2006, most children adopted from China were girls. We began to think about adoption again a few years later and found that the program and the needs of the children had changed quite a bit.

When we learned that China now offered parents the opportunity to bring home a waiting child  (a boy or a girl with special needs) we began to seriously consider bringing a boy into our family.

Our program coordinator explained that more girls are adopted internationally than boys. This is true even though there are more boys in need of adoption in many countries than girls.  In China, more boys are added to the shared list than girls on a regular basis.

The Waiting Child program was a large step for us when we compared the process of the traditional program. We knew in the traditional program, we would have a daughter; she would be young and healthy – largely available due to  her gender.  We knew the wait would be longer. With China’s Waiting Child program it is different. We had a beautiful smiling picture of a little boy, a toddler who was already 2 years old with “special needs.”

We had prepared and researched China’s Waiting Child program very early, prior to even looking at a referral. Our first task was to sit and take a look at the long list of potential conditions that China considered “special needs”.  In taking the time to review this list and determining what needs would and would not fit in our family lifestyle made us realize, special needs are not all chronic, life altering illnesses. Taking the time to review this list, determine what we were comfortable with up front, made our decision to proceed with the Waiting Child program much less of a large step.

After we made the commitment to proceed with the Waiting Child program the next step was to take the medical file of our potential son to our pediatrician to be reviewed. We were reassured by the ability to take his medical file to our pediatrician and review it in detail. We discussed the potential issues of each special need, what may be associated with them with regards to treatment and long term prognosis and then made a clear, informed decision. All along his referral picture was smiling back at us! The entire process was “personal,” with pictures and updates along the way.

Once Aiden was home there was no question that we had made the right decision and he was meant for us! Two years later, we went through the process again, and again we discovered that another little boy was waiting just for us.

All of our children are perfect in each and every way, regardless of the origins of their adoptions. But what still astonishes me to this day is the way people will look at our sons and when we comment they are from China – people always ask “I didn’t think there were boys available for adoption?” When I clarify for them there are numerous boys in China waiting for adoption through the waiting child program, the shock generally increases followed by the response “He has a special need?” Which I reply “Yes, he needed us!”

Carolina Adoption Services is a non-profit, international children's charity committed to finding stable, loving, adoptive homes for children in need of permanent families and dedicated to improving the quality of life for orphans and vulnerable children worldwide. In addition to comprehensive adoption services, CAS offers programs and services such as home studies, humanitari...