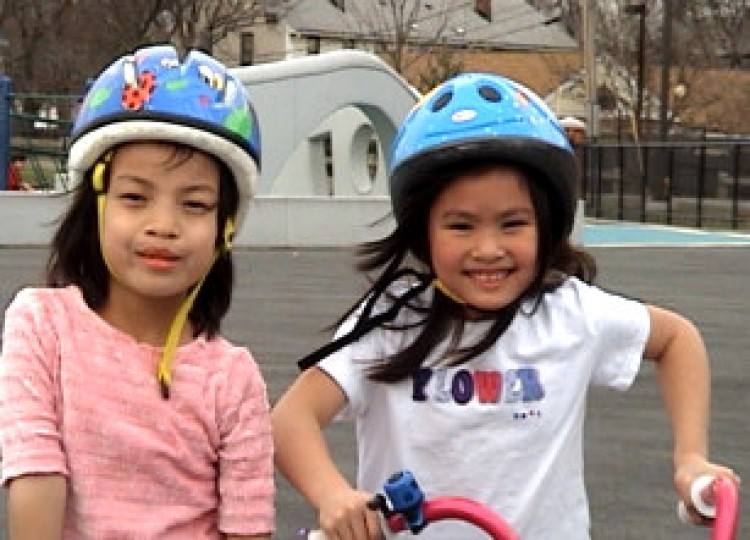 In August of 2003 I returned to China to adopt my second daughter who was six and a half years old and residing in Xinyang, Henan Province. I traveled with a bit of anxiety because the initial paperwork that I had received on Fu Yuanyuan had been two years old. It had stated that when found at 18 months she weighed about 9 pounds. According to my pediatrician, such a low weight at that age was likely indicative of serious cognitive delays. And while I received reassurances from the orphanage through my agency’s director that the information on the form was incorrect, I worried. What if I got there and this little girl who stared back at me from the black and white photo couldn’t learn to read or write? What if something happened to me and my other daughter had to take care of a seriously learning disabled sibling? Would it be fair to my older daughter? And then there was that same worry that had accompanied me when I went to get my first daughter years before…Will she learn to love me?

So I traveled with all these questions banging around in my head, but mostly wondering about possible cognitive delays. The agency had told me that I could always refuse the child if she seemed delayed. But could I really? Could I do that in order to protect my daughter at home?

All this worry disappeared when I met Fu Yuanyuan in the hallway of the hotel in Zhengzhou. It was obvious she was “all there” and also apparent that she didn’t think this Mom thing was such a good idea. She clung to her nanny’s hand and whimpered holding back tears. When the kindly director and his associates departed, she backed herself against a hall wall and tears just fell down her face.

Her fears and mine have long disappeared as our lives have grown together. Now we can’t seem to imagine life without each other. My older daughter, Anna, who once yelled

“I don’t want a stupid sister!” has more recently been caught wrapping her arm around her sister’s shoulder and saying “I love you, Addie.” They are each other’s best friend.

Fu Yuanyuan, now called Addis (Addie) Yuanyuan, did not start life out so easily. She was born with a severe cleft lip and palate. The lack of an upper lip made it necessary for someone to drip food into her mouth to keep her alive as she could not suck without an upper lip. Feeding an infant this way takes a lot of time and dedication. Fu Yuanyuan was later abandoned at 18 months in the Xinyang train station. In my heart, I know whoever kept her alive all that time, watched with a broken heart to see her discovered and taken away to the police station. From the police station she made her way to the care of the Xinyang SocialWelfare Institute. The orphanage had her upper lip repaired when she was about two and then when she was five, she was sent on a train to Beijing where her palate was repaired.

According to the orphanage staff, Yuanyuan was an engaging child. She liked to laugh and giggle. She knew how to recite some poetry when we met and she could write some characters and do some calculations. Any fears of learning disabilities quickly disappeared.

Yuanyuan weighed 38 pounds when I got her home that August. She was six and a half years old and wore a size 4. She had a short haircut that framed her face and a huge appetite. She loved ramen noodles and wanted them every morning for breakfast. She still does. She loved spicy food and when I first took her to an Asian market here in Boston, her face lit up excitedly as she piled her favorite foods into the carriage.

Addie was found by her pediatrician to be anemic but otherwise in general good health. Her teeth were yellow and her breath was no picnic either. When we went to the dentist however, she had no cavities. The bad breath was probably caused by a pocket left in the roof of her mouth from her cleft palate surgery. After a lot of brushing and some use of mouthwash, she now has white teeth and much improved breath. She will require further surgery on her upper jaw when she is ten and probably at that time they will do something to straighten out her top teeth. Addie also had quite a bit of scarring on her nose and over her top lip. She once confided in me that she did not think she was a pretty girl because of the scars. Recently the scars were reduced by the plastic surgeon at Children’s Hospital in Boston and Addie, in my biased opinion, is on her way to being quite a knockout. But more importantly, she feels good about herself.

Before I left for China, I researched the Boston area for someone to evaluate her palate upon our return. It turns out there is an excellent Cleft Lip and Palate clinic at Children’s Hospital and I scheduled an appointment. We went one afternoon for a series of evaluations. They checked her speech, which sometimes sounded very garbled. They checked her hearing as sometimes with cleft palate children, the ears are clogged with fluids from ear infections. Her ears and hearing checked out fine. The doctors said that her lip job needed revision and that the palate surgery done in Beijing was excellent. However, Addie was lacking a pharyngeal flap and would require surgery to construct one. The procedure creates a flap from tissue in the back of her throat. Addie had the surgery a few months later and while it was no fun for anyone, the results were life changing.

The same doctors now marvel at how clearly she can speak. They are also amazed at her acquisition of English, which I attribute largely to her need to talk talk talk all the time. She has turned out to be quite a chatterbox , optimistic and affable. She has also had excellent speech therapy through our public school system and my health plan. Her teachers have been excellent in working with Addie to gain confidence in speaking by encouraging her to speak slowly and clearly. The phrase “turtle talk” was used by a therapist to describe to Addie slower speech and “rabbit talk” was used when she spoke too quickly. She grasped the concepts easily.

Addie began kindergarten less than a month after she arrived in this country. She spoke a few words of English and listened a lot. The first school day was a bit rough on her as she couldn’t really communicate. Anna later told me that she saw Addie just standing against the fence watching the other kids play at recess. It was heartbreaking for me to hear. But soon she was running around and playing with the rest of the kids. She wanted to learn and was thrilled to be going to school. Addie appreciated everything about school. She hugged her teacher hello in the morning and told me she was trying her best to be a good student. Every day her vocabulary increased. A year later, she was tested by the school department to see how well she spoke English. On a scale of 1 to 5, with 5 being a native speaker, Addie scored a 4! I attribute her amazing language attribution to her youth, her determination, her sister’s help in explaining things “through a kids eyes” and to our reading stories every single night before we go to sleep.

Sometimes I am amazed at how easy transitioning Addie into our family was for us. Sometimes I have to remind myself that if anyone had a problem with the transition it was Anna. She had been used to getting all the attention. However adopting Addie was the best thing I could have ever done for Anna who was much more insecure and anxious before her sister came along. Addie gave Anna the opportunity to mentor someone and it also gave her a constant companion. Sure, sure, they fight like sisters, they tease like sisters, and they take up for each other like sisters. They are as different in personalities as can be but they are forever united in their sisterhood.

I have to admit that I myself had some adjusting to do when Addie first came home. She was and is a much louder child than I was used to. I still have to remind her to use her “inside voice” occasionally. Exuberant is a good word to describe Addie when she gets going. She is much more of a show off than my other daughter and I guess it took me some time to get used to her and well, her to me.

Then one night about two months after we had gotten home, she came quietly down the stairs from her bedroom and cried out “Mama”! I went running over to her and saw her face frightened by a bad dream. “Mama.” That was all it took for me to loosen up enough to let this little bird into my heart. I remember when I picked her up how she just hugged me and hugged me. And I hugged back.