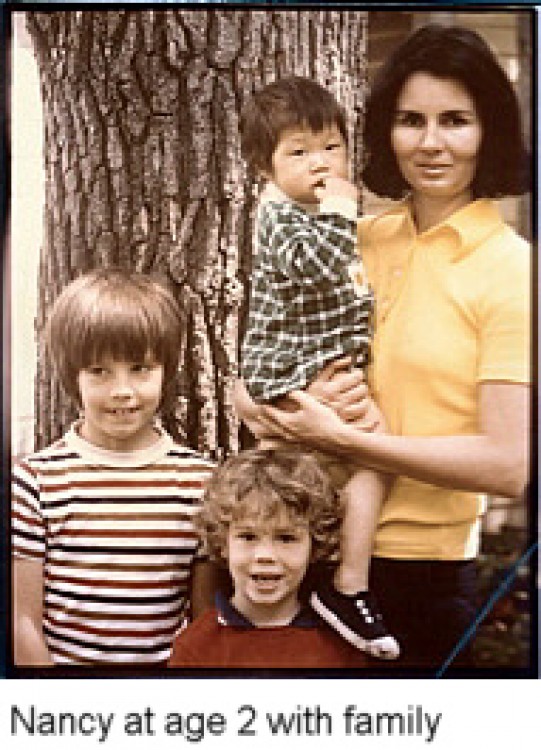 Movie producer Nancy Kim Parsons ( Adopted: The New American Family)joined her family through international adoption from Korea when she was almost 8 months old. She was blessed with a loving and supportive family, but growing up Asian in Minneapolis , Minnesota was not without its challenges.

Below, Nancy gererously shares her honest perspective of growing up as an Asian American. Question were provided by Adoptive Families.

Q: In what way, if any, did your adoptive parents foster you culturally? Did they share any info with you, were you on your own, was your Asian culture even acknowledged? Do you feel that traveling back to an internationally adopted child's birth-country is valuable in helping develop his or her self-identity?

A: My parents did try to foster me culturally by sending me to Korean camp, but I hated it!

Truthfully, I wanted nothing to do with any person or child that looked like me or anything having to do with being different. My adoption and Korean heritage were acknowledged in a balanced way without over emphasizing that I was different. As an adult, I am grateful that my parents recognized and honored my Korean culture, but as a child, I was very aware I was different-even when I couldn't articulate it or my parents acknowledged itand I wanted desperately to fit in.

Trans-racial adoption is tricky and, for me, issues around racism and racial identity were as important as the issue of family formation. I am a person of color-my parents are not. They don't-and cannot be expected to knowwhat it is like to be a person of color in the United States . What my parents didand what you can do as you parent a child of a different race-is be aware that despite your longings for a world where your love will be enough to protect your child from racism and a trip to your child's birth country or your attempts to celebrate cultural holidays with them will NOT be enough to give your children the racial identity that they deserve and desperately need. In other words, my parents taught me about Korea , but they couldn't teach me how to be Korean.

So, go ahead visit China or Korea or Guatemala with your child. It is a great way for both of you to experience and honor your child's culture. But understand that this, alone, does not give your child the racial identity that she will desperately need as she matures.

As I grew up, my experiences and conclusions were surprisingly different than my parents, not just because I was adopted, but because of my perspective-as a Korean-American adopted woman. Sometimes, it is hard for us to bridge the gaps, after all we, grew up speaking the same language, eating the same food and listening to the same music. But my parents simply are not people of color and sometimes forget that when you are a person of color everything is about race.

So as parents grapple with adoption and culture issues, I would implore you not to ignore another key question. How am I going to help my child develop a healthy sense of racial identity? Culture camps, trips to birth countries, support groups are all a great first step, but they are easy first steps. Helping a child of a different race develop a healthy sense of her racial step is a lot more complicated and deserves much more thought and attention.

Q. In your opinion, what are the benefits of international adoptions rather than domestic?

A: International and domestic adoptions have different challenges and similar issues, but I would not look at which one is better because both are very complex.

Thankfully, as parents begin to understand their children's needs they begin to see-as mine did-that their children have a right and a need to know about their history and a way to come to terms with it.

Q: We are what is now called a "conspicuous adoption" as my husband and I are very anglo and our son is from Kazakhstan but looks Asian. It bothers me that people just assume he is adopted. He could be my husband's child with, say, a deceased wife. We are proud he is adopted and we have decided to educate people and help promote adoption by answering questions when it is appropriate. However, how can we keep the focus on the fact that we are a family? Not a couple, with an adopted child?

A: I know the term conspicuous adoption is widely used to describe family formed through trans-racial adoption. Truthfully, as a person of adoption, I don't like it and think that it has negative connotations that could be hurtful to the child involved.

When it comes to trans-racial adoption, or any adoption, people will make assumptions about your family and say ignorant and insensitive things. That is an unfortunate fact of life that many people are tirelessly working to change. While this information is true, it doesn't make it any easier to deal with. There are many great resources that help families deal with these issues. These range from using humor-we're from Mars, to spending ten minutes educating people on the joys of adoption, but they have several common themes.

I would really ask people to connect to their true feelings about adoption before they consider adoption. With a trans-racial family, where the child is of a different race than both parents, it is reasonable for people to assume that the child is adopted. I am not sure how a person could be uncomfortable with that, yet say they are proud he is adopted. The two sentiments seem contradictory and would make me wonder if all of the loss issues surrounding adoption were worked through.

Q. I am concerned about biases that exist toward anyone of a different nationality, skin color, religion, or sexual preference. As the parent of an openly gay child I am concerned for his physical safety. How do you deflect potentially volatile comments or actions so that they don't escalate into an assault?

A: Bullying-the strong preying on the weak- has become quite a problem, played out dramatically in our schools. Unbelievably, 1 in 3 children are bullied and in many cases, adults don't find out about it until it has erupted into violence. We also know that the root causes of bullying are differencesracial, cultural, sexual orientation, family formation, etc. We also know that these biases begin at home-with us. As surely as we pass our family Thanksgiving traditions to our children we pass on our biases-both positive and negative. There are several things that I would like to suggest-they helped me when I was younger and may help you.

Q:What is the one thing that your parents could have done that would have helped you the most?

A: First of all, remember that I love my parents. I LOVE THEM with all my heart!

We are living proof that people can bond and be a strong family without sharing the same blood. It happens every day.

The one thing that my parents could have done was to help prepare me to deal with issues of racism and racial identity. While my parents did a remarkable job when it came to diversity-they have always embraced different cultures, , races, religions and sexual preferences- at a time where parents were told to assimilate the children and do not acknowledge difference-when it came to racial identity there personal experience was so different than mine-as a person of color-that sometime I felt alone.

In my family, race and racism were not discussed enough and when they were it was not productive. I wanted my parents to know the specific stereotypes and challenges I face so I can openly communicate and express my feelings honestly and openly, even when upset and angry. I wanted them to validate my feelings-even if they didn't understand them.

Let me give you an example. When I was young, we would travel north of our town where there were no people of color. Needless to say, people would point and stare at me and my family. I would get upset and angry at this and it would be compounded when my mom would try and explain it away by saying that people were staring because I was so pretty. While I recognize now that my mother was trying to protect me, we both know (and knew) that people were staring at me because I was different! How I wished my mother had just acknowledged that, rather than invalidate my feelings.

I have the solid relationship with my parents in spite of the many times I internalized my feelings and then exploded. Through it all my parents stuck by me and I never doubted that they loved me no matter what. I felt that I could always be myself and that they would accept me as I am.

I love them. They are my parents. Nothing can break that bond!