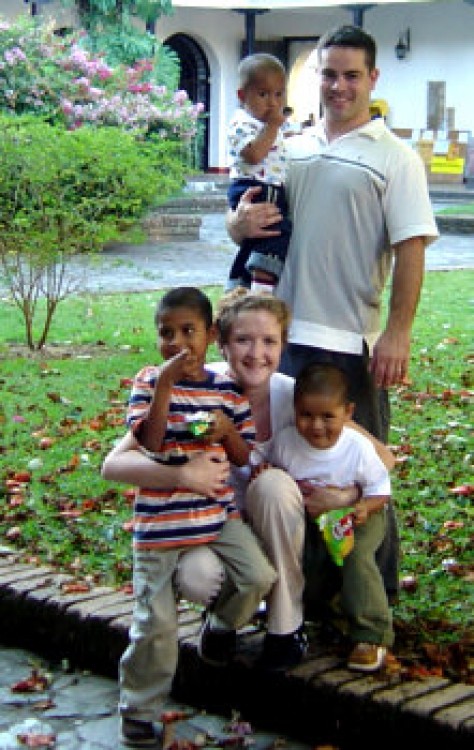 During his first day of second grade, Jhon Loehmer made several new buddies at his new school in his new country. “He came in after that first day and said he had four or five friends. He fit right in,” said his mother Anne Koch.

Not bad for a 7-year-old who only speaks Spanish and had called Belleville , Illinois home for just three weeks.

Meanwhile, when Jhon was at school, his two younger brothers were at home with mom, exploring the cushioning qualities of padded carpet on the knees of rambunctious little boys.

Joe Loehmer and Anne Koch had adopted these three brothers from Popayan , Colombia . Jhon, 7, Cesar, 3, and Andres, 14-months, were put into the arms of Joe and Anne on August 16, 2005 and once the adoption was final all flew home to Belleville as a family on August 31.

Although prepared for major adjustments, Anne says the transition for the family as been incredibly smooth. “I think it is because we have three brothers who count on each other…lean on each other,” Anne said.

But this adoption was anything but easy.

Almost four years into their marriage, Anne and Joe started the process they knew they would begin since the day they were married… adopt a child internationally.

Because Anne and Joe wanted to adopt two siblings and because they were in their middle twenties, Colombia was their country of choice. By November 2002 their dossier was on its way from Children's Hope International to Bogota . Anne and Joe counted on about an 18 month wait before their children would come home.

Just three months into that wait, Joe's Illinois National Guard Signal Battalion was called up for duty in Iraq . Joe was transported to Fort Riley , Kansas and by June his unit was shipped to Iraq .

“I told Julie (Julie Eagleson, Children's Hope Colombia Program Director), that it would be three months because that was to be the length of his tour, but then it was six and then nine months,” Anne said when talking about the amount of time her husband would be stationed in Iraq.

Joe was able to work on some of their adoption paperwork while in Iraq . So even if his tour was a full nine months it looked like they were right on schedule for the adoption.

But after nine months in Iraq, with some nights that included mortars falling within twenty yards from Joe's bunk, and a severe car wreck back in Belleville that left Anne's eyes swollen shut, the couple's stress level was no longer healthy to the future family. So shortly after Joe did return home from Iraq in May 2004, the couple decided to put their adoption on hold.

T hrough that summer and into the fall Joe and Anne made the transition from a couple caught up in a war to a couple ready to make a family. By December they started reworking expired paperwork and shortly after were in the wait again.

But soon, one more unexpected event looked like it would change and further delay the course of Anne and Joe's adoption. Their adoption dossier, which was now in Colombia verified that Anne and Joe would be open to adopting a sibling group of two or three but an official in the Colombian Institute of Family Welfare, ruled that Anne and Joe were too young to adopt siblings. The official then put them on a waiting list for a single infant.

“Then Julie and Lucia (Lucia Medina is Children's Hope's representative in Colombia ) did their magic and we ended back up in the right stack for siblings,” Anne said.

By July 2005, two years after Joe was deployed to Iraq , Anne got a call from Children's Hope about three brothers who needed a home.

“I am one of seven and my brother has seven so this is nothing,” Anne said making light of adopting three children at one time.

So this couple on the path to adoption, whose relationship was honed by their trials, is now a solid family of five. Their adjustments were made before the adoptions so there seem to be fewer after.

“What makes this work so well is Joe and Anne and their attitude. They have embraced these kids and parenting in general. They were 100% ready to make this change. They are a wonderful family,” said Julie Eagleson, Children's Hope Colombia.