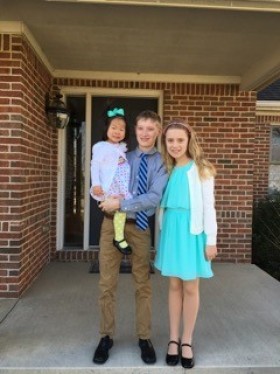 A Sister! A Sibling's Adoption Story

Sometimes when a family is considering adoption, they ask themselves, “How will it affect the children I currently have?”  Well, who better to answer that question than a child who has been affected by adoption themselves?  Brendan is the older brother to two beautiful sisters, one adopted from China.

“Nanchang, China,” I thought. “This is so cool. This is birthplace to my sister, Lila.” I sat in the back seat of the car and stared out the car window at the unfamiliar city. My family came halfway around the world to pick up my new sister and bring her home. We took two planes to get here. It was all worth it. More than worth it.

“I can’t believe this,” I thought. I then thought back to over a year ago when my parents told my other sister Bridget and I that our family was going to adopt. I remember thinking about having another sister. It was one of the most exciting times of my life, but not as exciting as right now.

It had be a year full of anticipation.  Within a few minutes we were at our hotel. We would be staying for a few nights, but more importantly, this was where we were going to meet Lila for the first time. I sat in the back seat of the car, twiddling my thumbs in excitement. I was last out of the car. I quickly unbuckled my seatbelt and chased after the rest of my family.  I had the video camera in my hand. As we were walking into the hotel, I remembered my dad telling me my job was to get the whole thing on video. It’s very important he told me. I took a deep breath then pushed the green button on the camera.  I had a big smile across my face.

There she was. My sister. Lila. She had a bright green dress with a lot of sparkles and a pair of bright orange sandals that squeaked when she walked. My mom told me that it was a popular trend in China for little kids to wear those shoes. “This is a true miracle,” I thought.

After my family greeted the woman who took care of Lila’s orphanage, my mom slowly approached Lila making sure not to scare her. My mom warned me before that she might get scared because she had not seen many Americans in the middle of China, much less had one approach her before.  Lila had a puzzled look on her little face. “It’s okay Lila,” Mom whispered in a comforting voice. Lila stared at Mom then back at the floor, her eyes starting to get a little watery. Luckily Mom was prepared and quickly pulled a lollipop out of her purse. She took the wrapper off then handed it to Lila. Lila studied the candy for a few seconds unsure of what it was. Mom stepped in again and helped Lila. After a few more seconds of confusion, Lila stuck the whole thing in her little mouth. She then smiled, and so did the rest of my family.

After my mom held Lila, my dad got his turn. When he was finished, he beckoned to Bridget and me that it was our turn. I handed him the camera, which was still running, and took a seat on the couch next to mom who was holding Lila in her lap.  Bridget sat on the other side of mom.

I looked at Lila who was engrossed in her lollipop. I then whispered to her, “Hi Lila, it is your big brother Brendan.”  She then looked up like she just noticed me. She giggled then looked over at Bridget. Bridget said, “Hi, Lila”. She laughed again. We all then laughed.

As we walked up to our hotel room with Lila I realized that change is important and is life. I thought back to when my parents asked what I thought if I had another sister. I could have said I did not want another sibling and avoid change. If I would have done that I would not have this amazing experience. Don’t run away from change, run at it.