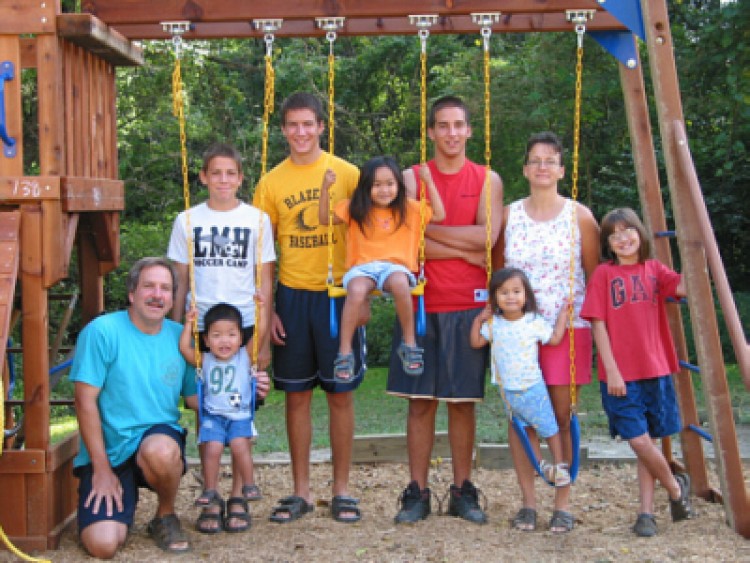 I never thought much about being from a large family, but here I am, the oldest of seven, soon to be eight. I weighed nine pounds, five ounces when I was born, and each of my siblings weighed progressively more. After my sister was born weighing ten pounds, four ounces, my mom said, “No more!” She had had enough of “having” babies, but not enough of “holding” babies. Adoption became her mission, and she soon had a convert, my dad.

And so, the adoptions began. The first was a little girl from southern China, Lin Xiao Lian. We named her Hannah. She lived in an orphanage for the first fourteen months of her life, and the back of her head is still flat from lying in a crib all day. We spoiled her rotten.

It didn’t take long before we were back in China again. This time I was allowed to go. I got a small picture of what an orphan’s life is like and what her future holds. Only the best jobs, like sweeping the streets with palm leaves and cleaning toilets, are available for the orphans. Many of the gifts given to the orphanage are first pilfered by the director and the nannies. There are stories of abuse. My new little sister’s name is Wu Min Yan. We named her Elizabeth. She is as cute as a button and is scared to death of being left alone.

Daniel was the next one. Oh Seong Soo, from South Korea, was a “Waiting Child” because of his large head and heart problems at birth. It’s getting harder for our family to adopt because we have too many kids, but because no one else wanted him, Korea made an exception. Daniel is a big boy with a big voice who makes sure he is heard.

A few months ago my parents called a family meeting. “How does everyone feel about another adoption?” At this point I have to stop and think, “Do I really want another snotty nose kid running around, getting into my stuff, and causing chaos?” More diapers, more stress, more babysitting? We drive this enormous blue “bus,” a Freightliner Sprinter, and people stop and stare. They ask ignorant questions like, “How much did they cost?” Because of our “second family” made up by my younger adopted siblings, I don’t get to take ski trips or go on family cruises as some families do. It is hard to travel and find activities that everyone enjoys. Do I really want another brother or sister?

Then I come home after school and my insane schedule of three AP classes, not to mention an advance writing class, and as soon as I open the door, there he comes. As fast as his fat little legs can carry him, with his chubby checks bouncing up and down, screaming, “Oshua! Oshua!” my little Korean brother comes to greet me. He refuses to say my other brothers’ names, only mine. At night, two little girls wrap their arms around my neck and say, “I love you, Joshie!” And then I realize how selfish I am. I have so much. Adoption has added a lot to my life, stretched me, and given me a global outlook far beyond my small little life in Lancaster County. My mom reminds me that as a Christian; I am adopted as well.

So, we’re adopting again, and I’m excited about it. This little boy’s name is Dang Shi Rui, but we will call him Timothy. According to China, we have too many kids, too close together, and we’re adopting too soon, but they have given us an exception. Why? Because he’s a “Waiting Child” as well. I’m looking forward to getting to know this little guy before I go off to college in the fall. Reflecting on adoption, I have to use Martha Stewart’s famous line, “It’s a good thing!”

Joshua Adams has just graduated from highschool this year. He will be going off the study Computer Science in college this fall.