Changing Anger to Love through Adoption

There are No Adoption Oddballs 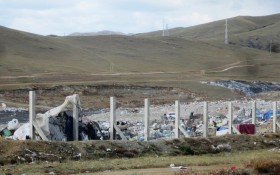 A Place Where No Child Should Ever Be

Amid the desolate hillsides outside Ulaanbaatar, Mongolia is a place no one should call home. It is the city’s largest garbage dump, where hundreds of families reside, making a living from the refuse. Until recently, the children of this impoverished community mostly avoided school — fearing bullying and discrimination. But now, for the first time, they have a safe space to learn, where they are loved and embraced by everyone.

Hop in the car. We have somewhere to take you.

You’re in Ulaanbaatar, Mongolia — an arid tundra and bustling city, home to the largest concentrated group of people in this historically nomadic country. It’s icy cold outside. But now, you’re fastening your seatbelt in the backseat of an SUV and driving up into the crisp air of the hillsides just outside the city.

As deep ruts turn the car nearly 45 degrees, you hold onto the door to try and keep yourself upright. Dust billows outside your window where you begin to see plastic bags spotting the scraggily roadside — more and more of them the farther you drive.
The car summits one last hill and you see your destination — a concrete and wire fence enclosing a space of several square kilometers, every foot of it overflowing with trash.

You are at Ulaanbaatar’s largest garbage dump. But to the families and children you are coming here to visit, this place is home. “It’s brutally magnificent in its desolation,” says Paul Kim, Holt’s director of Mongolia and Korea programs. “It takes your breath away, but in a really sad kind of way.”

The families who live in this desolate landscape Paul describes are mostly comprised of parents with young children. They live in shelters they’ve constructed from materials found around them and they spend their days going through the refuse, looking for items that they can either resell or recycle to create an income — or use for their own personal survival.

“The harshness of this environment… it is just not a place where children should be,” Paul says. “[It’s not a place] where anyone should be, really — but especially not children.”

Just a few years ago, several kind-hearted donors in Mongolia learned about these children’s situation and decided to take action.

But when the needs facing the community are so overwhelming, where do you even begin? Where every great success story begins. With education. In Mongolia, public education is free. And presumably, the only obstacle standing in the way of an education for the children living in the garbage dump is a long walk to the nearest school. But living in the environment that they do, far from a clean water source and other basic necessities, there are very few opportunities for them to bathe, wash their clothes or comb their hair. Once they arrive at school, if they arrive at school, these children then face an onslaught of bullying and teasing by their peers. They are shunned.

“So these kids, even though they’re brave enough to try and get to school, are then so ostracized that they just give up,” Paul says.
For the vast majority of these children, this heartbreaking reality kept them from an education and the opportunity to rise above the impoverished conditions they live in.

This is what inspired the Red Stone School. About a 20-minute walk from where the children live is a plot of land with two storage containers fused together, one small building, a concrete basketball court and a traditional Mongolian gher. This is the school where over 30 students gather each day to learn.

“Their teacher travels an hour each day to get to this school to teach these kids,” Paul says. “She teaches all four grades herself.” Hired by the founders of the school, their teacher is a compassionate woman who even used her own resources to beautifully decorate the classroom — bringing dignity and care to her beloved students.

When Holt staff in Mongolia first learned about the Red Stone School last year, Paul says they knew they had to do something to support these most-vulnerable children. “So we just called up their director and asked them, ‘How can we help?’”

Holt’s official partnership with the Red Stone School began in October 2016. Immediately, our staff matched each of the then 17 students with a Holt sponsor, who along with other Holt donors would help provide a full set of school supplies, fuel to heat their classroom through Mongolia’s brutal sub-zero conditions and a school cook to prepare warm meals on site every day. Just four months later, the number of students at the school has already nearly doubled. And the number of students continues to grow. The potential for this program to grow and reach even more students is huge. In this area alone, an estimated 100 students may soon be able to enroll in the school — and this is just one of several different refuse facilities in Mongolia where families and children are living.

“These are kids who would otherwise not be attending school,” Paul says. “Otherwise they’d be rummaging through garbage, or perhaps running away from home to see if they could find better opportunities closer into the city.”

In Mongolia and around the world, this is what we aim to prevent — family separation and child abandonment. By providing a safe environment for children where they receive education, basic necessities and nutrition, we are helping to ensure that their families stay together despite the hardships they face. “We want [the Red Stone School] to be a place were children are drawn to so we can help them to be happy, healthy and to stay with their families,” Paul says.

By investing in this generation of children, the hope is not only that their families will stay intact, but that children living in this desolate place will be empowered to dream beyond what they thought possible for themselves. That they would discover their full potential through education, nutrition, warmth and the confidence that comes from being accepted and loved no matter where you come from. Years from now, if you were to make this same drive up into the hillsides surrounding Ulaanbaatar, our hope and our goal is that the children attending Red Stone School will not be found in this place. Instead, they will be living in a home away from the refuse site, confident in who they are and pursuing their dreams — whatever they may be.

“What we’re doing there is most definitely helping kids stay together with their families,” Paul says, “giving them an opportunity for a better life.”