The Joy and Struggles of Parenting a Child with ADHD

Help find "Y" a Home Before her 12th Birthday 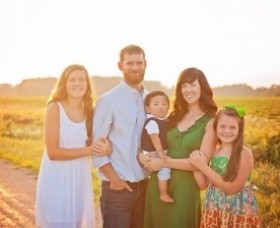 A Path Filled With Blessings

Our son Benjamin will celebrate his second birthday this summer –and his first year living in North Carolina.

Those are two of the miracle milestones our family is celebrating as we settle in following our trip to Nanjing, China, to adopt Benjamin last spring. My husband Brent and I, along with our daughters, Bethany, who’s 14, and Phoebe, 9, traveled in late May and early June last year to Jiangsu Province in eastern China to bring Benjamin home.

He was born with cleft lip and palate. He had surgery in China to repair his lip. About three months after we arrived back in the states, Benjamin had his palate surgery at Shriners Hospital for Children in Cincinnati, a place we describe as miraculous.

When we began the process to adopt internationally and decided to look into adopting a child with some medical needs, we were nervous about how we would afford that care. But when we checked out our options and discovered Shriners, which has facilities across the country, we felt truly blessed. The hospital will provide care for his lip and palate – free of charge – until he is 21.

Benjamin had palate surgery, along with ear tube placement to aid in speech development, at the end of September. We spent a week there – staying in accommodations onsite at the hospital – while a caring team of doctors and nurses gave him exceptional care. Shriners will fly us to Cincinnati for a free yearly checkup and when Benjamin is between 8 and 10, he will have a follow-up bone graft procedure there.

Benjamin is a smart and happy boy and he’s thriving. When he is around 2 ½, he will start speech therapy provided through the state of North Carolina.  We encourage other families to check into the variety of services at the state and national level available for families who adopt children with medical issues.

When we were in China, we got to meet several of Benjamin’s “nannies,” loving caregivers from the orphanage where he lived in Yangchang, a town about four hours from Nanjing. The nannies brought him to Nanjing, where we first met. We had prepared a list of questions about Benjamin’s routine and food preferences, and while we thought he would be able to eat some soft foods, he was not, so we bottle-fed him for the first few months.

His caregivers were wonderful and took pictures of our daughters interacting with Benjamin that first day. They also provided us with an email address where we could forward pictures of him as he grows.

For us, international adoption has been a wonderful option to grow our family. We knew there would be some uncertainties but we started the journey with a lot of prayers and asked God to lead us. We have found the path filled with blessings.