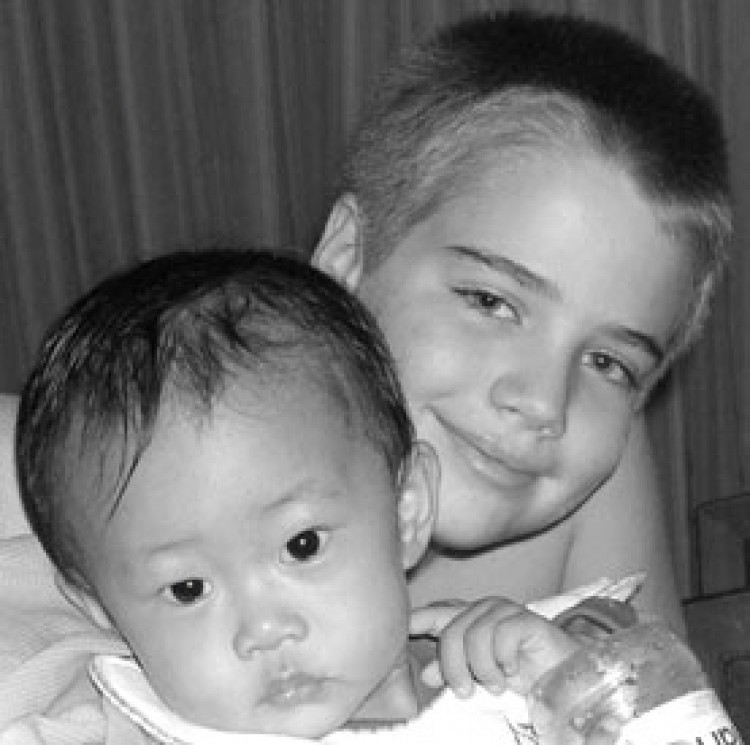 We began our journey, as a family of three, in May 2002. I am an attorney, my husband is an architect and we had, at that time, a seven year old son, Will, who was born to us. Our life was fairly organized and deliberate. We were comfortable with a lifestyle that prioritized family but allowed both Jeff and I to pursue our careers. Will was, as an only child, the center of our attention. He was, and is, a bright, loving and fun child. Still, we all knew that, as a family, we were not complete.

When we decided to grow our family, we worked on taking the route that lead us to Will - although, by a somewhat more premeditated approach. When we were disappointed in that effort, we considered adoption and immediately followed our hearts to China. During this time, Will expressed concern that our child (his sister) would not look like him and that maybe she would garner all the attention in the house, after she came home. Nothing major, though. We were, as usual, very aware of his needs and making sure he felt like he was not only part of the process, but essential to the success of the endeavor. In short, he was very ready to go get his little sister when the time came.

In November 2003, Will, Jeff and I went to China to pick up our daughter, Le Wei, at the Social Welfare Institute in Jujiang, Jiangxi Province, PRC. Will was 8 years old when we left, and 9 years old when we returned home two weeks later. On November 16th, Baile was to be delivered to our hotel, at 6:30 p.m., along with 8 other girls whose families were part of our "Happy Group" traveling party. We waited for 6:30 p.m. with all of the anticipation and nervousness you would expect. At 6:30, we went down to the lobby and were informed the girls were stuck in traffic due to a bad accident on the only road into Nanchang from the direction of Jujiang. It could be hours. We went back to our room and Will was sick in the elevator. He said he was so excited that the disappointment just made him sick to his stomach. I think he also had something in his belly he needed to get rid of, but, clearly, this little boy was brimming with anticipation of meeting his little sister.

The girls finally arrived around 11:00 p.m. that evening. Will had passed out and was not at the elevator when Le Wei - now, Baile Wei - was handed to me. (A moment beyond mere words.) But, as soon as we brought her back to the room, Will was awake and touching, kissing, reassuring and nurturing his little sister. It hasn't stopped since.

Three weeks later, our life seems not so organized and I'm not quite sure what our lifestyle is. Basically, it's one of bottles, diapers and interrupted sleep. (Nine years has a way of allowing you to forget about these little niceties of parenting.) One thing is for sure, Will is in love with Baile Brust - as are we. Like any good little sister, she loves him too, but will suffer his ministering only so far.

As with Will nine years ago, I cannot now imagine not having Baile in our lives. She is a beautiful, fun and funny child. My husband said to me one day as we watched her - "I just couldn't give her up." What a gift we have been given. One of the best parts of this gift is the new facet of Will's personality we are seeing. He adores his sister. Not an ounce of jealousy, insecurity, or, even, impatience! It's all about loving his adorable (his word) little sister. He wants her to come to the school to meet his class - she did. He wants to hold her - he does - she yells after she's had enough. Will is a big brother now. Baile is a little sister. We have "kids" now. How'd we get so lucky?