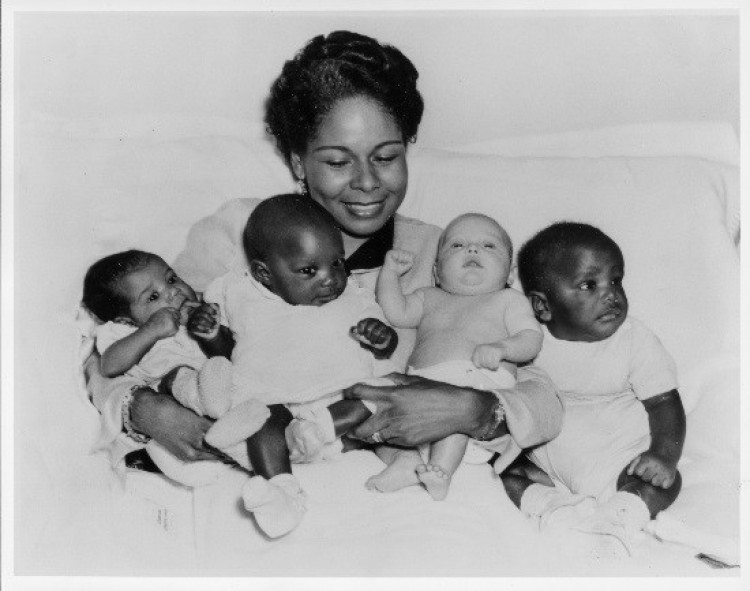 In the 1940’s, Gladys Randolph, former director of Social Work at Harlem Hospital, brought the issue of boarder babies languishing in her community without families to the attention of Spence-Chapin. Challenging the then-popular notion that African-American families were not interested in adoption, Spence-Chapin started a program in 1946 to respond to the crisis. Working hard to tackle this misconception, in 1953, the agency elected Mrs. Jackie Robinson, wife of the famous baseball player Jackie Robinson, to serve on the Board of Directors. She played a crucial role in recruiting African-American families and as the movement gained momentum, more illustrious Americans, including Ruth Harris (wife of political scientist and Noble Peace Prize winner Ralph Bunche), Marian Anderson (celebrated American singer), and Willetta S. Mickey (wife of Civil Rights pioneer Hubert Delaney) helped Spence-Chapin recruit African-American adoptive families.

Eleanor Roosevelt was the featured speaker for a Spence-Chapin conference in 1954. Mrs. Roosevelt was quoted in The New York Times as saying, “No matter what the color of their skin, all our children must be looked at as the future rich heritage of the country.”

In 1991, adoptive parents of African-American children formed the Spence-Chapin African-American Parents Advisory Committee, known as AAPAC. The group, which welcomes all families parenting African-American, Black, bi-racial, and multi-racial adopted children, brings families together for social networking and support. One of the positive outcomes has been the close ties formed by members and their children, and the sense of community which has evolved among families.

Today, Spence-Chapin continues our mission of finding adoptive families for all children in the New York tri-state area and abroad as well as recruiting African-American, Black, bi-racial, and multi-racial adoptive parents.

Nelson Mandela, the former South African President, shared Eleanor Roosevelt’s vision of unity.  He was relentless in his mission to end apartheid in South Africa, and even after that goal was accomplished, he remained dedicated to helping others in need. Mandela’s devotion to positive social change and justice for others laid the foundation that would eventually make intercountry adoption possible in South Africa. Since 2013, Spence-Chapin has been one of just two U.S. agencies approved by the South African Central Authority to place children with American families and we are incredibly thrilled and honored to do so. South Africa is one of the most diverse and multicultural countries in the world. In addition to the country’s indigenous black majority, colonialism and immigration have led to the largest communities of Asian, European, and racially mixed ancestry on the African continent. Families and children face a host of social and economic challenges in South Africa, a nation with a long history of poverty and inequality, and while access to anti-retroviral treatment has increased in recent years, HIV/AIDS remains a prominent health concern in the country.

To help facilitate our work in South Africa, Spence-Chapin teamed up with Johannesburg Child Welfare (JCW), an organization that has been at the forefront of providing direct services to children and families since 1909. Our adoption program finds families for the children who are most vulnerable and most in need, toddlers and young children with medical needs, as well as sibling groups, with the youngest children being 18 months to 2 years old at the time of referral.  There are many preschoolers and school-aged children waiting for families, as well. Due to the HIV epidemic, there is a specific need in finding families for children who are HIV+. Other common medical conditions include Hepatitis B, auditory and visual impairments, extreme prematurity and developmental delays. Children receive excellent medical treatment at JCW, however it is this medical diagnosis that’s been a barrier for domestic adoptive families and other international adoptive families.

If you are interested in more information about adoption from South Africa, please visit us online, email us at info@spence-chapin.org, or call us at 212-400-8150.

Connecting With Our Children: 7 Core Issues in Adoption