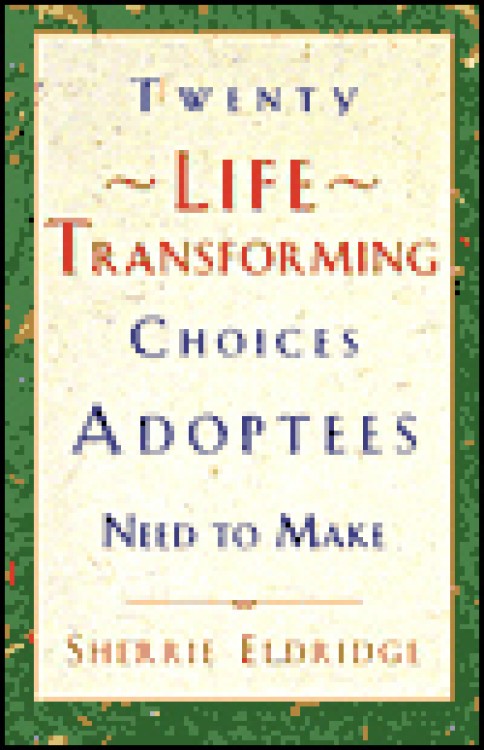 I'll never forget sitting next to an adoptive mom at an adoption carnival where I was speaking. At the end of the day, the children gathered on stage to show their parents an adoption art project they had been creating.

When all the kids were in place, one therapist yelled, "Who's adopted here?"

Everyone's hands flew up and squeals of delight burst forth from the little ones. "Me!" they yelled in unison.

The mom leaned over and said, "I've never seen that expression on my daughter's face. Look at her! When she said "me!" her face absolutely glowed!"

What caused such happiness? The excitement of being with other kids? Pride in her artwork? Love of the spotlight?

I don't believe so.

I believe the girl positively glowed because she had been given a brand new beautiful gift; the gift of fellow adoptees. We are a gift to one another! As adoption experts David Brodzinsky and Marshall Schechter put it, for adoptees, these connections are like food to a starving man.

Many adoptees are starving for a sense of belonging akin to the bond shared in close-knit birth families. Fortunately, because all adoptees share a crucial piece of personal history, the loss of or separation from our birth families, much of our hunger to belong can be satisfied through each other.

In my newly released book,Twenty Life-Transforming Choices Adoptees Need to Make, more than 70 adoptees shared several more reasons why adoptees relate so well. A few are listed below.

Richard Curtis says we share a common bond that bridges all ages, genders, races, and religions, and understand that we are there for each other as we seek truth and openness in adoption.

Poet Penny Callan Partridge says, "The adopted are certainly 'my people' the way others might identify with an ethnic group. I believe that connecting with other adopted people has been just as important to me as finding my birth relatives. I cannot imagine my life without both.

Knowing other adoptees, reports Jody Moreen, has created a wonderful bond of connection because there is a kind of a sisterhood and brotherhood amongst us. For her, this has filled some of the void created by not knowing her heritage.

Deb Bryan was amazed at the immediate closeness she felt to fellow adoptees, more of a connection than to folks she had known for years.

Seven-year-old Maggie Backiewicz says, "With my adopted friends, it seems like we're related in some way."

We Are Drawn to One Another

Not only are we like family, we are drawn to one another. When Gary Rowe's daughter was a preschooler, she gravitated to other adoptees in her class. She didn't know they were adoptees, but there was a mystical pull.

Sharon quickly became very good friends with another girl. When they started to share secrets, guess what the first secret was. They were both adopted!

Kimberly's best friend is a fellow Korean adoptee. She also participates in three Korean adoptee support groups?one of which is for first-generation adoptees from Korea. It is such a joy, she relates, to find so many people with commonality as well as diversity.

We Have a Unique Emotional Language

Years ago my husband's family hosted a German foreign exchange student for a year. He spoke little English and we tried very hard to communicate through charades, by talking loudly and slowly. Nothing seemed to work.

When it comes to the language of adoption, similar communication breakdowns play out between adoptees and non-adoptees. When adoptees speak to other adoptees, they have a gut-level instinct that their audience "gets it."

Penny Callan Partridge remembers how important it was in grade school to know that there was a fellow adoptee in her class. "Even though he and I never talked about being adopted, she recalls, there was comfort in knowing that I was not alone."

If you sit in an all-adoptee support group and an adoptee shares deep from the heart, you can hear a pin drop. If you look around the circle, you will see heads nodding in agreement and tears flowing in empathy. I remember one newcomer coming to our adoptee support group and sheepishly confessing that in other groups he acted like a chameleon and conformed to the group's beliefs and behaviors because he had no sense of personal identity. Upon entering our group, he felt 'at home' for the first time.

Cheri Freeman says adoptees can read each other from just a few words or body language, "an ability that makes us feel like we belong to one another." Such a feeling, she believes, is a rare privilege because many adoptees don't feel they truly belong anywhere else.

"As an adoptee," shares Joe Soll, "my friendships with other adoptees have been wonderful because we understand each other and can easily have empathy for one another."

We Can Freely Vent Our Feelings

In support groups that include other triad members, adoptees must be sensitive and on guard. We don't want to hurt other members of the triad by sharing our raw emotions and innermost thoughts. When it's all adoptees, conversations can be wide open.

I remember a 20-something adoptee who once blurted out, "Adoption sucks!" Bless his heart! That was his reality at the time and how wonderful that he had the safe environment and courage to say it. Group camaraderie deepened because all members had experienced similar feelings at one time or another.

We Don't Need to Explain Ourselves

Not only can we vent, but we can intuitively understand one another. We have a sense of "knowing."

Connie Dawson, Ph.D. says it's a relief not to have to explain herself or protect herself from judgments she often senses when someone finds out she's adopted. "It may have something to do with adoptees being 'rejects' or something," Connie says. "Sometimes I think people feel at a primitive level we have experienced abandonment and they pull back because their worst fear is being abandoned."

It's great to not have to explain ourselves, but when we do talk, we find one another downright tantalizing!

I met my first adoptee friend when I was 45. Jody Moreen had just moved to Indianapolis and was looking for adoption literature from a biblical perspective. One Sunday she visited a church and noticed a newspaper headline about adoption. It was mine! Before long, we were spending hours in our favorite little tea room sipping spiced tea and talking adoption.

Looking back, I can say that not having a fellow adoptee friend was akin to never knowing the scrumptious taste of triple-chocolate cake!

We Can Be a Huge Safety Net for One Another

Many of us have been in therapy for years before our ?I-have-it-all-together? mask is broken and we learn to intimately share our cavernous souls. I am a big fan of therapy; therapists can teach us how to trust ourselves and others, and many adoptees need help at one time or another in their lives.

The nature of therapy, however, has its drawbacks for adoptees. No matter how long we're in therapy, it must eventually end. When I terminated with my treasured physician, I slipped back into feelings of abandonment even though we went through the grieving process together. I realized that I was just one of his many patients, but he was my only therapist!

The therapist par excellence is a fellow adoptee who 'gets it' , someone who continually strives to learn the precious lessons that only adoption can teach. We are blessed to have such rare individuals in our midst: Betty Jean Lifton, Connie Dawson, Dirck Brown, Joyce Maguire Pavao, and Joe Soll, to name a few.

And, no matter how successful our therapy is, we are still vulnerable to feelings of abandonment. Just as a tight rope walker needs a safety net beneath to catch him if he falls, we need a safety net to catch us from sinking into feelings of abandonment. I believe that net is strengthened by friendships with fellow adoptees. Those relationships, unlike therapy, never have to end!

You have just read an explanation of one of the 20 truths from my new book? One hour with a fellow adoptee can be more rewarding than years of therapy focused on addressing our feelings about being adopted. Head knowledge, however, is only the first step and must be followed by choice, resulting in action.

Here's my advice: Make a choice to connect in meaningful, supportive relationships with at least one fellow adoptee, or to help your adopted child form such relationships. Then, take action! I guarantee that if you (or your child) take the time to make a quality connection with other adoptees, your faces will glow just like the little girl's at the adoption carnival.

Ways to Connect with Adoptees

-Start an adoptee support group. Place an ad in your paper inviting anyone who has been touched by adoption to contact you. You might be surprised at the results.

-Find resources for leading the group. Jewel Among Jewels Adoption Network, Inc., has adoption-related workbooks that can help. We will do whatever we can to get you started and list your group on our web site.

-Read about others who are touched by adoption. Tapestry Books (800-765-2367; www.tapestrybooks.com) prints a catalog of adoption books. Internet sites (including www.adoptionjewels.org) also feature adoptee stories.

For Parents of Adoptees

-Connect with an adoptive parent support group. Some have child care programs, and other opportunities for adoptees to interact.

-Start an adoptee play group with other adoptive parents.

-Watch movies with adoption themes and then discuss them. Visit www.adoptionshop.com to browse through adoption-related movie titles and summaries.

-Host an adoption carnival where you can offer speakers for parents and for adoptees.

-Enroll your child in a heritage camp. Agencies and groups throughout the U.S. and Canada offer heritage camps for adoptees from Asia, Latin America, Eastern Europe, and other places.