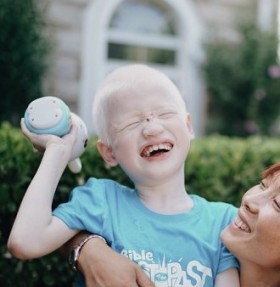 The following advocacy article was graciously shared by The Archibald Project, an orphan care advocacy organization. Please share this article near and far! If now is not the right time for you it might be the perfect time for someone you know!

In the Fall of 2016, I was perusing a child advocacy site to see if any kids at Bethel had been listed with new agencies. I saw the picture of an older boy with albinism still living in his orphanage who touched my heart, but Bethel already had a long waiting list, so I willed myself to keep scrolling. All the sudden my message inbox started filling up... and so did my email... and so did Bethel's social media messages.

"I saw this boy with albinism on an agencies list... he could do so well at Bethel!”…

I contacted our China director and told her about this boy, but I was pretty sure the answer would be no. We already had a waiting list, it's hard to find a school that will take older kids, we would be moving sites soon... but to my surprise, our director watched a short video clip and read his file and said, "He can come if his orphanage will allow it." And that's how Victor ended up at Bethel!

We actually gave him the English advocacy name "Victor" (RK# 38373)  because to us, it symbolized that he would be victorious in spite of the troubles that he's faced. Victor is an overcomer. In just a few months with us, his self help and communication skills have vastly improved. He's curious, and loves to play outside. One of his favorite activities has been to play with the hose. It was so cute to watch him smile and laugh as he splashed in the water. He also loves listening to music and likes to carry around a toy that doubles as a radio.

Victor is a loyal boy. He loves his main teacher so much, she can get him to try new things and always makes him smile. Watching their relationship has been such a joy. When I asked his teacher for an update on him, her whole face lit up. I said, "You're pretty proud of him, aren't you?" and she nodded, beaming. "He's learned so much!" she said.

Victor is paper ready for adoption! View another video and read more about Victor here!

While he waits, Bethel China is looking for sponsors for Team Victor! If you'd like to know more about child sponsorship, you can email tabitha@bethelchina.org, or click here to set up a sponsorship.

She's a Gifted Artist and Will Age Out in Four Months

His Joy is so Abundant! Jaylenn Needs a Family