A Boy Who Waits: Meet C. 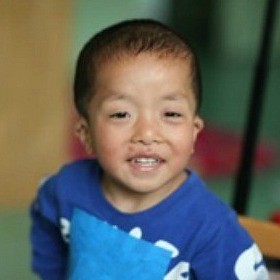 We recently spoke with Jane Steinmetz and Cheryl Heley, volunteers with Red Thread Charities, about some of the children they met while working in orphanages in Asia. One of the boys who made an impression on them was nicknamed Tian Tian; a bright, kind and curious little six year old.

Tian Tian is a little helper: frequently helping the nannies and several of his friends who have Cerebral Palsy. “He told us, when he grows up, he wants to be a teacher,” said Cheryl.

He has to limit his strenuous activity, but this doesn’t hold him back from having fun. Jane noted “he’s able to play with the other kids on the playground.” When asked what animal he would be and why, he said he wanted to be a duck “because they can swim,” Cheryl explained, “He likes to play in the water.”

Tian Tian really wants a family and has told his class he is going to America and not coming back.

Tian Tian is one of the boys currently waiting for an adoptive family. Do you have room for one more in your family? If so, please contact intchild@chsfs.org to learn more about Tian Tian and be sure to reference 215-11.