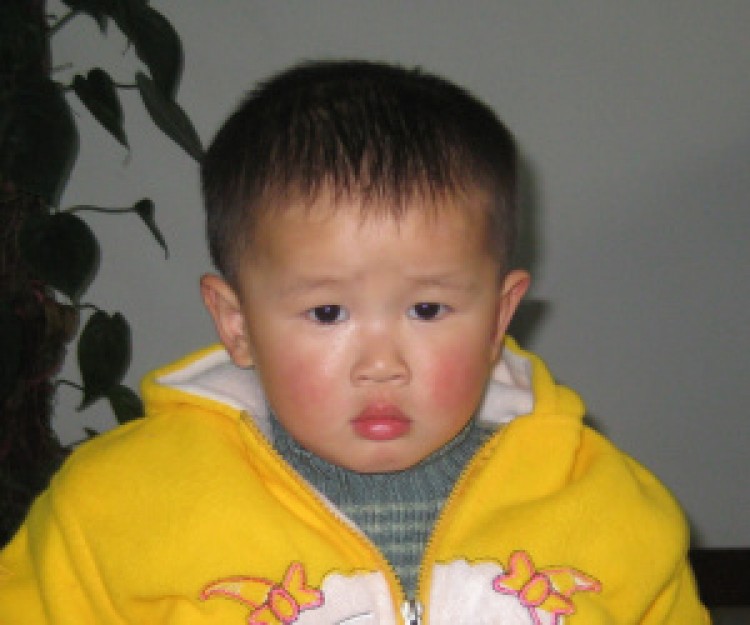 Phyllis and Jim T. thought their family was complete, until one day, while surfing the Internet, Phyllis fell in love with a little boy, Michael, from China. The T. family already had adopted a son from Korea; they had no plans to adopt another child. But when Phyllis saw Michael’s picture, she says, “it was like finding yourself suddenly pregnant when you thought you were through having children.” Michael captured her heart. The T. family stepped forward to adopt again.

When the T. family’s first son Anthony was four, he began asking for a little brother or sister. Both nearing their 50s, Phyllis and Jim were uncertain. Babies required a lot of care. “That’s why God gave babies to people in their 20s and 30s,” thought Phyllis. Each time Anthony would talk about having a sibling, Phyllis’ heart ached. She says, “I was not only grieving the inability to conceive a child, but also the inability to grant Anthony’s request.” Anthony was relentless and full of faith. He asked,

“Mommy, what if God sent us a baby from heaven? What would we do?”

To ease her heartache, Phyllis frequented adoption websites, looking at pictures of waiting children. When she discovered baby Michael on RainbowKids.com, she fell in love. Phyllis remembers, “Michael looked sweet andinnocent, like all he wanted as to be held and cuddled.” He had been born with imperforated anus, a birth defect that required two life-saving surgeries in China. Phyllis felt so drawn to Michael, that, unbeknownst to her husband, she called Myriam Avery to learn more about him. An email filled with answered questions and complete medical records confirmed for Phyllis her desire to adopt. Unsure of her husband’s response, Phyllis quickly called him to confess what she had done. His response? A resounding, love-filled yes.

The journey to adopting Michael was new and complex for the T. family. While their first son had arrived via escort from Korea to Nashville, Phyllis and Jim would travel this time to China to bring Michael home. Neither had ever traveled outside of the United States, and the prospect of overseas travel seemed daunting. They talked often about what China would be like, but their worries dimmed as they envisioned seeing Michael for the first time.

Michael’s medical needs posed an even greater concern. Here, Jim’s confident love for Michael bolstered Phyllis’ spirits. He assured her, “If we had a natural born child it could have been born with this defect, and we would have loved it the same.” Confident that they could provide better medical care for Michael, the T. family started the adoption process.

In the next months, Phyllis and Jim worked diligently to meet deadlines and get their new baby home. Before they knew it, they were in a Chinese hotel room with a very emotional, sullen two year old. Michael was very attached to his caregivers, spoke Chinese, and had never seen white people before. The transition overwhelmed him. Phyllis and Jim showered Michael with affection. They kissed him and sang to him, and each day he began to open up to them. During their two week stay in China, Michael blossomed. He learned some basic English words, ate until his belly was full, laughed, played and climbed into bed to watch TV.

Since arriving home, the T. family has delighted in watching Michael meet life’s developmental milestones – language acquisition, relational attachments, food exploration, and comfort in his surroundings. Phyllis says, “Watching him evolve from an orphan into our son [has been] amazing.” Every day holds something new to discover.

Michael has had to endure five corrective surgeries since he came home. He has also had major dental work. Post-surgeries, Michael no longer needs a colostomy bag.  He now enjoys a life that is filled with happiness, soccer, swim lessons, pets, friends, and the dear big brother who prayed for his arrival.

Michael does not remember China, although the T. family talks about it. He sometimes leafs through the photo albums of his parents’ trip to bring him home, and he knows where China is on the map. He does not remember his life there, and Phyllis and Jim cannot remember life without him. Parenting two boys has taught them patience and compassion. For Phyllis and Jim, answering questions, teaching prayers, settling arguments, laughing, and watching their boys grow constitutes the best job in the world. Phyllis says, “When adopting a child, you love the child regardless of their sex or their medical issues. Some societies are paternally oriented. To be given the gift of a boy from such a society is exceptional.”

View Other Children Who Wait for an Adoptive Family Now!