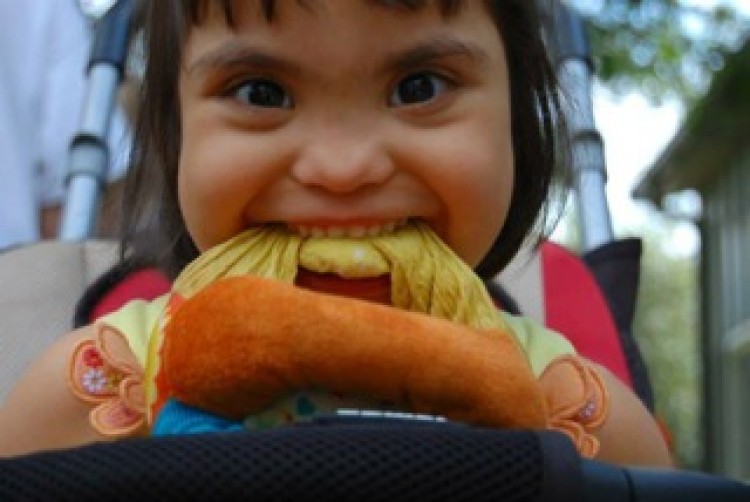 We had been searching for a special needs child to adopt through the foster care system for over a year but unfortunately, our efforts were unsuccessful. We talked and prayed about what to do after our domestic home study expired, and then all of a sudden the Lord began to open doors for us to adopt internationally.

Not being ones to let grass grow under our feet, we immediately began our search for the child the Lord would have us adopt, and we found a little girl we believed would fit our family perfectly. Because she has Down syndrome, she was abandoned by her parents at birth. Since then she had been living in an orphanage in Bulgaria in very poor conditions. The year before we adopted 20 children in her orphanage died from severe neglect and malnutrition, so her situation was truly desperate. She was nearly three years old but was only the size of a six month old baby.

We submitted paperwork to Bulgaria asking permission to adopt her and received approval to place her file on hold pending preparation of our dossier. The Ministry in Bulgaria gives this “hold” for a six month period and the dossier must be submitted in this time. All we could do is trust that the Lord would take care of her until we could go get her, and that everything would happen in His perfect timing.

Almost eight months to the day of submitting our agency application to Children’s House International we travelled to Bulgaria to meet our daughter. While travelling was worrisome and tiring, visiting my daughter in her orphanage was bittersweet. I knew at the end of the week, after signing an agreement to go forward with the adoption, I would have to leave her in her orphanage. The week went by way too fast, and I found myself trying to build a wall of indifference around my heart so I wouldn't have to feel the pain of separation from her. Unfortunately, it didn't work, and on the last morning all I could do was keep praying and asking the Lord to give me strength to make it through the next few hours. Tears fell unchecked down my cheeks as fast as the remaining minutes ticked off the clock.

My only comfort was knowing that although I was leaving, Jesus would still be there with her. Nor would my daughter understand that we were leaving. . . I'm sure to her we were just a nice little distraction from her normal boring routine and nothing more. Her baba would still be there to take care of her, just like every other day for the last six months. But now that our eyes and hearts had been opened to this precious little one, we would not be as fortunate.

From the day we committed to adopt this precious child, I knew this day would be one of the most difficult of my life. A mother's first instinct is to protect her child at all costs. How could I just walk away and leave her in this cold, dark prison? My heart was screaming, "I can't DO this, Lord!" And I kept hearing His still, small voice replying, "I am with you, Daughter."

After many twists and turns in processing we finally had the news in May 10, 2013 that our daughter was finally legally ours in the eyes of the Bulgarian courts. We were allowed to travel one month later to bring our Bulgarian Princess home!