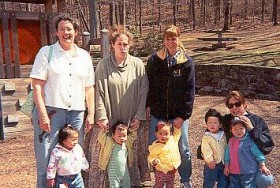 Our story so far:

Our family is growing in ways I never imagined. My first adoption was the fulfillment of my dream to become a mom. My Rosie was the perfect baby, we had a wonderful trip to China, had a great adjustment home, life was good. Rosie was 13 months old when we met. I had adopted her through the regular non-special needs program after pondering single
motherhood for a number of years. The wait was over a year back in 2000-2001, and I did all the new-mom things appropriate to the occasion: ladybugs, baby clothes galore, obsessing over referral times, collecting packing lists, taking an intro to Mandarin class... I met other waiting families and we started regular get-togethers. The first family to bring their daughters home were neighbors who luckily received the twins they had requested. What a great start to our playgroup-to-be!! Rosie came home next, two months later. Within the next year there was a whole gang of little ones all about 2 years old. Here's a photo of one of our playdates at a local park. Rosie and I are on the left. It was only a couple of months after getting home that I was sure we needed a sister. Lally's story will be the next post.

Once I decided we needed a sister, very soon after coming home with Rosie actually, China instituted a quota system for single parents. Whereas before about 1/4 to 1/3 of China adoptions were single parent families, now it would be 5% (it has since been raised to 8%). All of a sudden there were waiting lists years long, and some agencies were not working with singles at all any more. A few agencies told me their Waiting Child programs were exempt from the quota, but I really didn't think that would work for me. Handicaps? Surgery? Older kids? None of it seemed to be easy to manage as a single mom. But once I saw the photolistings I was hooked - the children were so beautiful, their problems such a small part of who they were, and they waited and waited for a family. It didn't take long before I was signed up with an agency waiting to see their next list of Waiting Children. In June 2002 I saw Lally's picture for the first time. She had the biggest, roundest cheeks, and such a sad expression, and a little right hand on a short right arm. Her description said she was a "quiet cherub" and her name meant "the scent of plum blossoms in the winter brings hope of the spring". Who could resist? BTW, I don't think she's ever been quiet, and cherub... well, maybe when she's asleep! My dossier was done in record time, and we travelled less than 6 months later. We met Lally in Hefei in December, and have been a family of three ever since. Rosie came with me to China (along with my dad and younger sister) and it was a great adventure. Two toddlers! Two in diapers! Two on bottles! Here's a picture of Rosie and Lally yucking it up at Lucy's in Guangzhou. They are as close as twins, sisters in every single way that matters, each other's best friend, and each other's nemesis sometimes too. We all think an older brother would fit in just fine. More on Luke's story next.

Read more of this blog at: http://sw3rosielallyluke.rkblogs.com/index.html Read other adoption diaries, or begin your own by going to RKBlogs.com